Feargal Sharkey sur Twitter : "Here's a rather fantastic map of them all drawn by @srbuss. It also shows their current environmental classification, note, not 1 chalk stream in England is classified as being of 'High' ecological status, not 1. They should. Water apps. Jordan. Prehistoric submarine pools. Chalk streams. 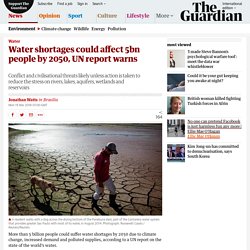 The comprehensive annual study warns of conflict and civilisational threats unless actions are taken to reduce the stress on rivers, lakes, aquifers, wetlands and reservoirs. The World Water Development Report – released in drought-hit Brasília – says positive change is possible, particularly in the key agricultural sector, but only if there is a move towards nature-based solutions that rely more on soil and trees than steel and concrete. “For too long, the world has turned first to human-built, or ‘grey’, infrastructure to improve water management. 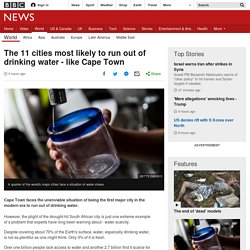 However, the plight of the drought-hit South African city is just one extreme example of a problem that experts have long been warning about - water scarcity. Despite covering about 70% of the Earth's surface, water, especially drinking water, is not as plentiful as one might think. Only 3% of it is fresh. Over one billion people lack access to water and another 2.7 billion find it scarce for at least one month of the year. According to UN-endorsed projections, global demand for fresh water will exceed supply by 40% in 2030, thanks to a combination of climate change, human action and population growth. #River #map shows where the water flows permanently in #Australia. Source.

Water Walk. Water Balance App. About this App This app is based on data from NASA’s Global Land Data Assimilation System (GLDAS-2.1), which uses weather observations like temperature, humidity, and rainfall to run the Noah land surface model. 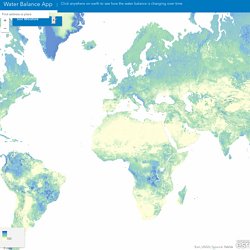 This model estimates how much of the rain becomes runoff, how much evaporates, and how much infiltrates into the soil. These output variables, calculated every three hours, are aggregated into monthly averages, giving us a record of the hydrologic cycle going all the way back to January 2000. Soil moisture plus snowpack is the water storage at any given place. Every month that storage volume changes according to the water flux - recharge occurs when precipitation is high, depletion occurs when evapotranspiration and runoff are higher. Click anywhere on the map to see how a chosen variable has changed over time, and click anywhere on the graph to switch the map to that month of interest. $114 billion/year in overall global investment is needed to meet #WASH targets of the #SDGs. New #WaterCartoon calendar illustrate… Asia’s glaciers supply water to 800 million people – a third of these glaciers projected to disappear by 2100. Beyond Scarcity: Water Security in the Middle East and North Africa. 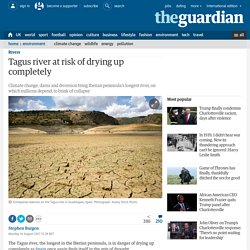 Miguel Ángel Sánchez, spokesman of the Platform in Defence of the Tagus, says “the river has collapsed through a combination of climate change, water transfer and the waste Madrid produces.” The Tagus, known in Spanish as the Tajo and Portuguese as the Tejo, rises in Aragón in northern Spain, passes close to Madrid and forms part of the border with Portugal before flowing into the sea at Lisbon. En route, it is dammed no fewer than 51 times in Spain alone. Maps Show How Water Can Be a Precious Lifeline—or a Deadly Weapon. In the recent conflicts in Iraq and Syria, water has often been used as a weapon. 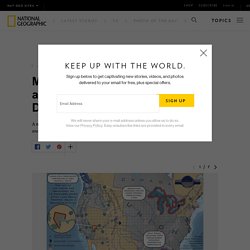 When ISIS seized the Fallujah Barrage, a dam on the Euphrates River, in 2014, they raised the floodgates to deprive downstream cities of water. *****Video "Japan's Support for the Solution of Water Problems: Cambodia full version" Losing Louisiana: the sinking state. The southern US state is sinking twice as fast as previously thought, with human mismanagement of its coast being held largely to blame Scientists have long known that Louisiana is sinking. 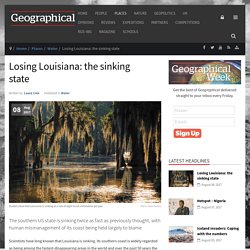 Love the Nat.Lib.of Scotland website - including the side by side viewer. Here is Clatteringshaws on 1850 map (no loch) and today (loch) ***** Murray-Darling basin: a brief history – video. *****Found: A Giant Crack in the Arizona Desert. In Arizona’s Tator Hills, the Arizona Geological Survey has located a giant fissure in the earth. 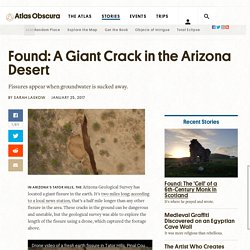 It’s two miles long; according to a local news station, that’s a half mile longer than any other fissure in the area. *****Europe divided: In the West tap #water is safe to drink in the #East it isn't. #OTD 1892 Official inauguration of Liverpool's water supply from Lake Vyrnwy. The Vyrnwy dam is the 1st high masonry gravity dam in Britain. Hoover Dam construction, 1931-36. Groundwater pumping drying up #GreatPlains streams, driving #fish extinctions @ColoradoStateU @PNASNews. The big picture / learning journey for EQ1 of water helps with the @PearsonGeog focus on discursive issues/ answering enquiry qus AO3 lang. Climate Change Poses a Threat to Our Oceans. We cannot protect our share of the ocean with walls; instead, we must cooperate in a spirit of solidarity. 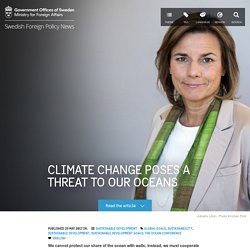 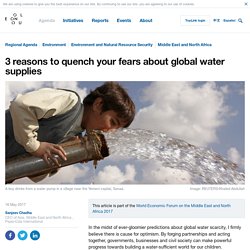 By forging partnerships and acting together, governments, businesses and civil society can make powerful progress towards building a water-sufficient world for our children. 1. We don’t need a technological breakthrough. GSA News Releases - Contact. Boulder, Colorado, USA: The heart of the United States is a highly productive agricultural region. 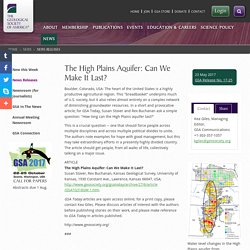 This "breadbasket" underpins much of U.S. society, but it also relies almost entirely on a complex network of diminishing groundwater resources. In a short and provocative article, for GSA Today, Susan Stover and Rex Buchanan ask a simple question: "How long can the High Plains aquifer last? " This is a crucial question -- one that should force people across multiple disciplines and across multiple political divides to unite.

*****Highlighting risks of hydropower dams in Mekong Delta for #COP21 delegates. Access to clean water & sanitation around the world mapped #GIS HT @DrDCWahl. ***** Making dirty water drinkable: @IOM_Somalia is using Polyglu to treat drinking #water and help Somalis affected by the recent #drought. Follow a gallon of water from Lake Mead to a Las Vegas tap – Las Vegas Review-Journal. Water trickles from a job site and gathers along the curb to evaporate in a new gated neighborhood under construction at the Las Vegas Valley’s western edge. There is barely enough liquid running down this Far Hills street to wash a load of laundry, but it’s hard not to feel its loss when you consider how far it came. To reach this Summerlin neighborhood at the farthest reaches of the valley’s distribution network, water must travel more than 50 miles by pipe and climb more than 2,500 vertical feet, a height greater than two Stratosphere Towers stacked on top of each other.

*****This amazing 'edible water bottle' could put an end to plastic packaging. *****Earth, Then and Now: Dramatic Changes in Our Planet Revealed by Incredible NASA Images. If you compare some of the photographs which can be found on NASA’s website, you can really see how human beings have changed the appearance of our world over the years. The time difference between these images ranges from five to 100 years. Incredible stuff. Pedersen Glacier, Alaska. Summer, 1917 — summer, 2005. Aral Sea, Central Asia. Lake Oroville, California. Carroll Glacier, Alaska. Powell Lake, Arizona and Utah. *****Exporting water: Groundwater depletion embedded in international food trade #watersecurity exporting water in food.

After a dry winter, groundwater levels are lower than normal for the time of year, and scientists from the British Geological Survey are keeping a close eye on the situation. Although February produced an average dose of rainfall for the south of England, it wasn’t enough to make up for the deficit resulting from a dry spell stretching all the way back to last summer. Met Office data reveals that, in the six months up to January 2017, much of the country was parched, with less than 70% of average rainfall falling across southern regions. #Water use by category from 1980 to 2050 Households (blue) Agriculture (green) Industry (pink) (German report)

*****Climate change: Bolivia's second largest lake dries up, in pictures. *****'Parched' Chinese city plans to pump water from Lake Baikal via 1,000km pipeline. China is reportedly considering plans to build a 1,000km (620 mile) pipeline to pump water all the way from Siberia to its drought-stricken northwest. According to reports in the Chinese media, urban planners in Lanzhou, the capital of Gansu province, have drawn up proposals to pipe water into the chronically parched region from Russia’s Lake Baikal, the deepest freshwater lake on earth.

Li Luoli, an academic who is one of the plan’s cheerleaders, claimed the mega-project - roughly the equivalent of pumping water from Lake Como to London - was both theoretically feasible and “certainly beneficial” to China. “Once the technical issues are resolved, diplomats should sit down and talk to each other about how each party would benefit from such international cooperation,” said Li, the vice president of the China Society of Economic Reform, a state-run think tank. The drastic plan underscores the severity of the water crisis facing Beijing. Additional reporting by Wang Zhen. 11 March 1864. The 'Great Sheffield Flood' occured, after a dam burst, killing 238 people and destroying 600 houses. Indian traders boycott Coca-Cola for 'straining water resources' Keeping an eye on groundwater levels — UK groundwater in February 2017. BGS scientists analyse groundwater levels across the UK each month.

Extreme weather is damaging to crop production and threatens food safety worldwide, according to a new study published in Nature on Wednesday. And the most developed nations like the U.S., which rely heavily on industrial monocultures for food production, are particularly vulnerable. The study, which evaluated cereal production losses due to extreme weather in 177 countries from 1964-2007, found that "droughts and extreme heat significantly reduced national cereal production by 9–10%....Furthermore, the results highlight ~7% greater production damage from more recent droughts and 8–11% more damage in developed countries than in developing ones. " "That was a surprise to us," Navin Ramankutty, an agricultural geographer at the University of British Columbia and co-author of the study, told Mother Jones on Wednesday. As Ramankutty explained to CBC News, As MoJo's Tim McDonnell wrote on Wednesday, the latest findings don't mean that "developing countries are out of harm's way.

Tapping the Freshwater Ocean Under the Sea. Statoil, an oil and gas company based in Norway, has looked at fresh water for oil extraction, but isn’t rushing to develop it. How much water does it take to make your favourite Christmas meals? Offgrid water banking a Commons Currency from Transition Town Bolton @TTBolton Water as Commons. ***Desalination’s Future in California Is Clouded by Cost and Controversy. Audio Player Once thought to be the wave of the future, desalination is proving to be a tough sell in California.

***Why houses in Bermuda have white stepped roofs. Image copyright Alamy. ***US water use by region and time (Interactive map) In the map below, State size (area) is scaled proportionally to State freshwater use. What is hydrodiplomacy? And how does it HT @RebeccaCarrotte #watersecurity. Map of Earth’s hidden groundwater reserves shows we’re using them too quickly. *China: south-to-north water diversion project. Las Vegas, Nevada, USA - sprawl v L Mead (Timelapse – Google Earth Engine)