The War Against Solar Energy 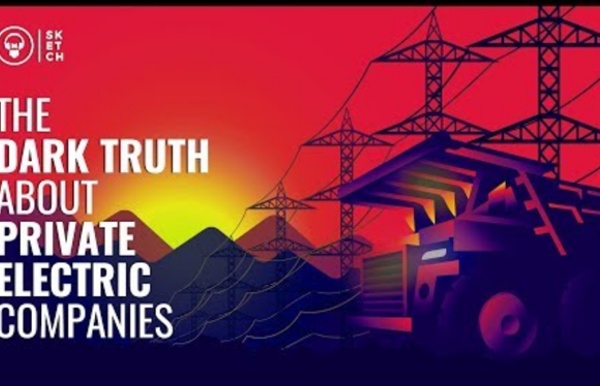 Related:  How it works • The Only Earth We Have • Koch Brothers Manipulating Policy for Profit • Dangerous, Influential Manipulators

Delayed, not saved: Foxconn's Wisconsin "factory" announcement is a bid to help Trump save face After announcing that, inevitably, it wasn't going to build an LCD factory in Wisconsin, and would instead use its $4.1 billion subsidy to build a modest R&D facility employing out-of-state skilled workers; Foxconn reversed itself and promised that the factory was back on. The factory is not back on. LCDs are pure commodities, among the lowest-margin components, and about to be made obsolete by OLEDs. There is zero business-case for building these outside of Asia-Pacific. Climate Undermined by Lobbying For all the evidence that the benefits of reducing greenhouse gases outweigh the costs of regulation, disturbingly few domestic climate change policies have been enacted around the world so far. So say UC Santa Barbara professor and economist Kyle Meng, and co-author Ashwin Rode, a former UCSB Ph.D. student now at the University of Chicago, in a paper published in the journal Nature Climate Change. “There is a striking disconnect between what is needed to avoid dangerous climate change and what has actually been done to date,” said Meng, a professor in the Bren School of Environmental Science & Management and in the Department of Economics.

The trolling of Elon Musk: how US conservatives are attacking green tech He is the charismatic Silicon Valley entrepreneur who believes his many companies - including the electric car manufacturer Tesla Motors, solar power firm Solar City, and SpaceX, which makes reusable space rockets – can help resist man-made climate change. South African-born Elon Musk is a billionaire green evangelist, a bete noire of the fossil fuels industry who talks about colonising Mars and believes it may be possible that we’re living in a computer simulation. But having been feted by the Obama administration, he now faces an extraordinary barrage of attacks from rightwing thinktanks, lobbyists, websites and commentators. The character of the assault says much about which way the political wind is blowing in Washington – something that will have consequences that stretch far beyond the US. One of Musk’s most trenchant critics has been the journalist Shepard Stewart, who writes for a clutch of conservative online news sites.

Trapped in a hoax: survivors of conspiracy theories speak out Conspiracy theories used to be seen as bizarre expressions of harmless eccentrics. Not any more. Gone are the days of outlandish theories about Roswell’s UFOs, the “hoax” moon landings or grassy knolls. Instead, today’s iterations have morphed into political weapons. Turbocharged by social media, they spread with astonishing speed, using death threats as currency. Together with their first cousins, fake news, they are challenging society’s trust in facts. The 1% Won't Owe Social Security Tax After April 2019 click 2x Without question, Social Security is this country's most important social program. It can rightly be called a financial rock for millions of elderly Americans, with the benefits provided accounting for more than half of all monthly income for 62% of retired workers and the program single-handedly keeping 15.3 million of those aged beneficiaries above the federal poverty line. But it's also a heavily criticized program for the way it collects revenue.

The Social Life of Forests The Social Life of Forests By Ferris Jabr Photographs by Brendan George Ko As a child, Suzanne Simard often roamed Canada’s old-growth forests with her siblings, building forts from fallen branches, foraging mushrooms and huckleberries and occasionally eating handfuls of dirt (she liked the taste). What billionaires want: the secret influence of America’s 100 richest If we judge US billionaires by their most prominent fellows, they may seem to be a rather attractive bunch: ideologically diverse (perhaps even tending center-left), frank in speaking out about their political views, and generous in philanthropic giving for the common good – not to mention useful for the goods and jobs they have helped produce. The very top titans – Warren Buffett, Jeff Bezos, Bill Gates – have all taken left-of-center stands on various issues, and Buffett and Gates are paragons of philanthropy. The former New York mayor Michael Bloomberg is known for his advocacy of gun control, gay rights, and environmental protection. George Soros (protector of human rights around the world) and Tom Steyer (focused on young people and environmental issues) have been major donors to the Democrats. In recent years, investigative journalists have also brought to public attention Charles and David Koch, mega-donors to ultra-conservative causes. Unfortunately, this picture is misleading.

A Russian 'troll slayer' went undercover at a troll factory Slaying online trolls can be a lonely business. Just ask Russia’s Lyudmila Savchuk, who first exposed the story of Russia’s disinformation campaign back in 2014. The journalist and 33-year-old mother of two, Savchuk started noticing websites and social media accounts attacking local opposition activists in her hometown of Saint Petersburg with a frequency she hadn’t seen before. The Prescription Drug Landscape, Explored Overview Americans spend more on prescription medications each year than the citizens of any other country. Measuring drug spending remains a challenge, however, because of limited public data on how much the various payers and supply chain intermediaries pay for prescription drugs. Several public and private organizations have recently published U.S. drug spending estimates using different methodologies. These estimates differ, but an analysis from The Pew Charitable Trusts indicates that spending on prescription drugs has increased in recent years. The federal Centers for Medicare & Medicaid Services (CMS) estimates that total retail prescription drug spending rose 26.8 percent between 2012 and 2016—a faster rate of growth than all other categories of personal health care expenditures.

They’re Among the World’s Oldest Living Things. The Climate Crisis Is Killing Them. Sequoia Crest, Calif. — Until a few years ago, about the only thing that killed an old-growth giant sequoia was old age. Not only are they the biggest of the world’s trees, by volume — the General Sherman Tree, considered the largest, is 36 feet in diameter at its base and 275 feet tall — they are among the oldest. At least one fallen giant sequoia was estimated to have been more than 3,200 years old. They last so long that, historically, only one or two of every thousand old-growth trees dies annually, according to Nate Stephenson, a research ecologist for the United States Geological Survey.

Why we need to talk about the media’s role in far-right hate When it comes to the threat of Islamist terrorism, no one doubts the role of radicalisation. The internet, hate preachers such as Anjem Choudary and Abu Hamza, and the western-armed, extremism-exporting state of Saudi Arabia: all play their part in radicalising the impressionable. When it comes to the far right, however, this consensus is absent. The reason for this is as obvious as it is chilling: the hate preachers, recruiting sergeants and useful idiots of rightwing extremism are located in the heart of the British, European and American establishments. They are members of the political and media elite. Less than two weeks ago, dozens of Muslims were murdered in Christchurch.

The Simplest Explanation Of Global Warming Ever Earth energy budget diagram, with incoming and outgoing radiation (values are shown in W/m^2). Satellite instruments (CERES) measure the reflected solar, and emitted infrared radiation fluxes. The energy balance determines Earth's climate. Let's play pretend for a moment. Pretend, if you can, that you've never heard about the idea of global warming before.

Watching Earth Burn I have a pastime, one that used to give me considerable pleasure, but lately it has morphed into a source of anxiety, even horror: earth-watching. Let me explain. The earth from space is an incomparably lovely sight. I mean the whole planet, pole to pole, waxing and waning and rotating in that time-generating way it has, and not the views from the International Space Station, which is in a low orbit about 200 miles up and gives us only part of the whole.

Related:
Related:  How it works   -  The Only Earth We Have   -  Koch Brothers Manipulating Policy for Profit   -  Dangerous, Influential Manipulators