ABC Online Indigenous - Interactive Map. Aboriginal Australians. A finger across the throat and a glance seaward. 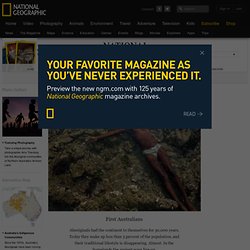 That’s the signal. The two men grip their spears, hand-carved from stringybark trees, and walk barefoot over the red soil to the water’s edge. Then into the aluminum dinghy, engine revved, and across a warm shallow bay of the Arafura Sea, at the wild edge of Australia’s Northern Territory. Terrence Gaypalwani stands at the bow, feet spread for balance, staring intently at the water and indicating with the tip of his spear which direction to travel. He’s 29 years old, mid-career as a hunter. Australia, we need to talk about the way we speak. We must reclaim rhetoric as an important fixture of Australian culture, teach it to all students in our schools and raise our standards of communication. 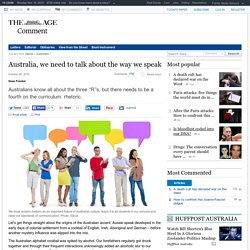 Photo: iStock Let's get things straight about the origins of the Australian accent. Aussie-speak developed in the early days of colonial settlement from a cocktail of English, Irish, Aboriginal and German – before another mystery influence was slipped into the mix. The Australian alphabet cocktail was spiked by alcohol. Our forefathers regularly got drunk together and through their frequent interactions unknowingly added an alcoholic slur to our national speech patterns. The average Australian speaks to just two thirds capacity – with one third of our articulator muscles always sedentary as if lying on the couch; and that's just concerning articulation. Illustration: Jim Pavlidis Poor communication is evident among all sectors of Australian society and the annual cost to Australia may amount to billions of dollars. Australian Museum - nature, culture, discover. Skip to content (Press enter) Blog Latest blog entries Waite, there’s more... 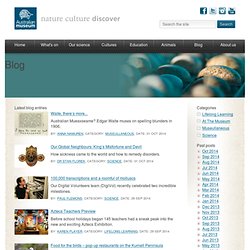 Australian Mueaxseame? Edgar Waite muses on spelling blunders in 1906. By: Anna Namuren, Category: Museullaneous, Date: 01 Oct 2014 Our Global Neighbours: King’s Misfortune and Devil How sickness came to the world and how to remedy disorders. By: Dr Stan Florek, Category: Science, Date: 01 Oct 2014 100,000 transcriptions and a roomful of molluscs Our Digital Volunteers team (DigiVol) recently celebrated two incredible milestones. By: Paul Flemons, Category: Science, Date: 29 Sep 2014 Aztecs Teachers Preview Before school holidays began 145 teachers had a sneak peak into the new and exciting Aztecs Exhibition. Mystery hikes - an album on Flickr. The Lost Man. “By now they might know me,” Derek Abbott said, glancing around the Somerton cemetery for the groundskeepers. 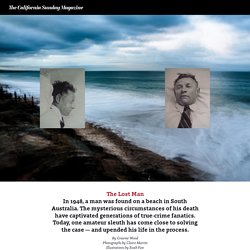 On December 1, 2014, 66 years to the day after the Somerton Man’s demise, Abbott, a physicist and engineer at the University of Adelaide, was taking me to his grave. For years, someone had placed flowers on it; some said it was the nurse. The original letters on the gravestone had become loose, and a few had fallen on the ground. We picked through the pebbles in the blazing sun, finding chunks of alphabet that we plugged back into the small headstone until it read: Here lies the unknown man who was found at Somerton Beach 1st Dec. 1948. But some of Abbott’s fellow investigators think his obsessions and celebrity have led him astray and turned him into a Pied Piper of true-crime nerds. Abbott, 55 years old and with thinning dark hair, is gainfully employed, although over several days in Adelaide, his free time to discuss this case appeared almost limitless. Cronulla Riots - Documentary - SBS.

The way forward for #LoveOzYA. Earlier this week we hosted a lively discussion about the current state of Australian young adult fiction (or, OzYA) at our Hawthorn shop. 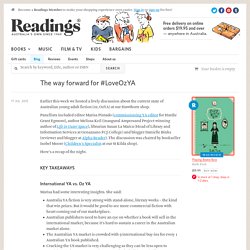 Panellists included editor Marisa Pintado (commissioning YA editor for Hardie Grant Egmont), author Melissa Keil (inaugural Ampersand Project-winning author of Life in Outer Space), librarian Susan La Marca (Head of Library and Information Services at Genazzano FCJ College) and blogger Danielle Binks (reviewer and blogger at Alpha Reader). The discussion was chaired by bookseller Isobel Moore (Children’s Specialist at our St Kilda shop). Here’s a recap of the night. International YA vs. Oz YA Marisa had some interesting insights. Australia YA fiction is very strong with stand-alone, literary works – the kind that win prizes. Danielle pointed out that Australian YA has a good reputation and is often seen overseas as one of the big three for YA fiction, along with the US and UK. What do teenagers actually want? Diversity Adults reading YA Censorship.