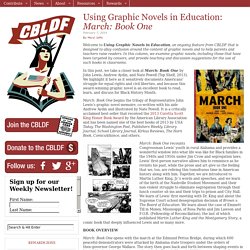 In this column, we examine graphic novels, including those that have been targeted by censors, and provide teaching and discussion suggestions for the use of such books in classrooms. In this post, we take a closer look at March: Book One by John Lewis, Andrew Aydin, and Nate Powell (Top Shelf, 2013). We highlight it here as it sensitively documents Americans’ struggle for equal rights and civil liberties, and because this award-winning graphic novel is an excellent book to read, learn, and discuss for Black History Month. March: Book One begins the trilogy of Representative John Lewis’s graphic novel memoire, co-written with his aide Andrew Aydin and illustrated by Nate Powell. 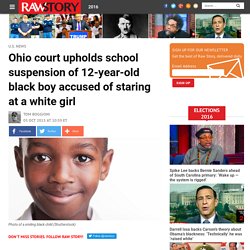 The unidentified student was suspended from a private Catholic school, St. Gabriel Consolidated, in September of last year after school officials say he “intimidated” his classmate. According to the boy, he and the girl were engaged in a staring contest and that she was giggling the whole time. Court documents state that the girl said she “felt fearful,” leading the school to suspend the boy despite the fact that he wrote an apology saying he meant no harm. “I never knew she was scared because she was laughing,” he wrote. According to his parents, they filed suit to have the suspension removed from his record. “The perception is he intimidated her,” said his mother, Candice Tolbert. According to Tolbert, the same girl was involved in an incident at the school that was much worse, yet led to no repercussions. Aboriginal life today. 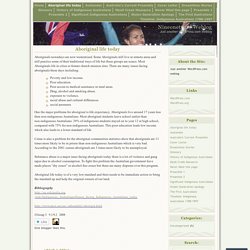 Some Aboriginals still live in remote areas and still practice some of their traditional ways of life but these groups are scarce. Most Aboriginals life in cities or former church mission sites. There are many issues facing aboriginals these days including: Poverty and low income.Poor education. Poor access to medical assistance in rural areas.Drug, alcohol and smoking abuse.exposure to violence.racial abuse and cultural differences.social pressures One the major problems for aboriginal is life expectancy. Crime is also a problem for the aboriginal communities statistics show that aboriginals are 11 times more likely to be in prison than non-indigenous Australians which is very bad. Substance abuse is a major issue facing aboriginals today there is a lot of violence and gang rapes due to alcohol consumption. Bibliography ©Group 3 9.1/9.2 2008 Like this: Like Loading... 9 Australian Slang Terms that Make Horrible Things Sound Fun. A few weeks ago, I was a guest on the Newbie Writers podcast, and one of the hosts, Damien Boath, is Australian. 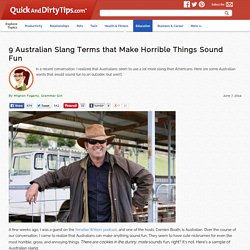 Over the course of our conversation, I came to realize that Australians can make anything sound fun. They seem to have cute nicknames for even the most horrible, gross, and annoying things. There are cockies in the dunny, mate sounds fun, right? It's not. Here's a sample of Australian slang: