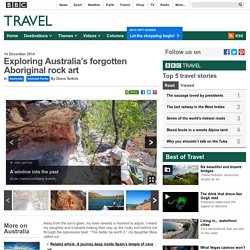 I heard my daughter and husband making their way up the rocky trail behind me through the oppressive heat. “This better be worth it,” my daughter Maia called out. Related article: A journey deep inside Spain's temple of cave art I peered through the dim light of a shallow cave and spotted an array of centuries-old paintings. There was a red ray with white dots overlapping a crocodile. Spotted ray and crocodile. And yet, I was perplexed. Gap Year Travel sur Twitter : "This work & travel package is perfect for travelers who want to earn cash & explore #Australia. Australia - The Ultimate Aussie Package with Real Gap. Company : Real Gap Activities: Gap year / Career break / Working holiday jobs / Work Placements / Adventure / Extreme Travel / Jobs / Professional Work Country: Australia Location : Sydney Looking for a working holiday in one of the world's most incredible destinations? 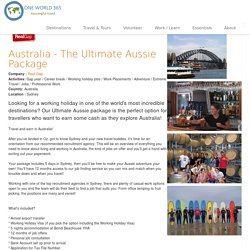 Our Ultimate Aussie package is the perfect option for travellers who want to earn some cash as they explore Australia! Travel and earn in Australia! After you’ve landed in Oz, got to know Sydney and your new travel buddies, it’s time for an orientation from our recommended recruitment agency. Beautiful Pictures sur Twitter : "Sunrise framed by the Cathedral Rocks of Kiama, #Australia. Photo by William Patino. Remarkable Travels sur Twitter : "Breakfast with the King Parrots, Blue Mountains, #Australia #animallover4life #animals... Photo by nomadicnotes. Photo by nomadicnotes. Drebmann : Lunch in #Australia.What's... Am. Am. To The Land Down Under. We took a train to Nehrang, and the supposedly a bus to Surfers Paradise - our HRC quest! 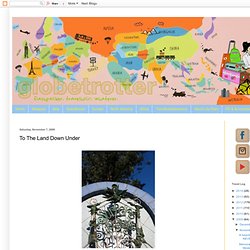 We met with this nice friendly lady with the most cutest daughters and adorable son. We chatted to past time. Waited at Nehrang for half an hour (bored to death), finally the bus arrives, got in, another 1 hour drive to HRC…sigh… the train was 2 hours ride (we stopped for half an hour due to some issues involving police at 2 station after Sunnybank), the bus 1 hour ride… talk about passing the time. We must have prayed hard enough that god answered our prayers. To The Land Down Under. Kylie Fraser: Had a great day at Austral... Perth's Tumbulgum, King's Park & Lake Monger. Lemme first apologise that the old trip pics have way too many pic of moi (dasar perasan!) 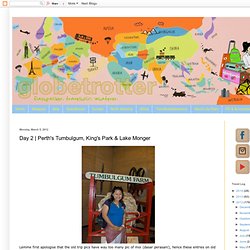 , hence these entries on old trips will be one that you gonna so say... "Ek elaa, lagi lagi muka dia bersepah". Mind you, it's not intentional, but feel free to compliment my youth and cuteness (and chubschubs-ness, HAHAHHHA). Anyway, continuing with the story (this trip happened in November 2005); we visited the Tumbulgum Farm to catch the sheep sheering (missed this in May 2005 Perth trip as there was a tornado hitting the area), sheepdogs muster the sheep, meet a live emu, pluck oranges etc etc... Fantastic experience. Briefing was given by the operator, he have his mic and his Kelpie sheepdog next to him, waiting eagerly for his master instruction. Top 10 luxury Australian experiences. Australia offers a vast array of incredible attractions unique to the country. 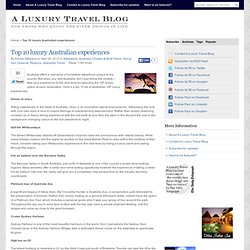 But when you visit Australia, don’t just follow the crowds – take your experience to the next level by selecting the VIP luxury option at each destination. Here’s a top 10 list of Australian VIP luxury experiences. Dinner at Uluru Sitting majestically in the heart of Australia, Uluru is an incredible natural phenomenon. Witnessing the rock with your own eyes is sure to inspire feelings of overwhelming astonishment.

Sail the Whitsundays The famed Whitsunday Islands off Queensland’s tropical coast are synonymous with natural beauty. Hot air balloon over the Barossa Valley The Barossa Valley in South Australia, just north of Adelaide is one of the country’s prized wine-making regions. Platinum tour of Australia Zoo. Tourism WA. Gorgonian or Fan Coral. The Gorgonian or Fan Coral as it is commonly refered to is one of the favourites of the scuba divers on our Great Barrier Reef trips. 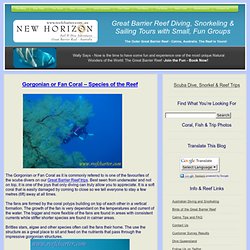 Best seen from underwater and not on top, it is one of the joys that only diving can truly allow you to appreciate. It is a soft coral that is easily damaged by coming to close so we tell everyone to stay a few metres (6ft) away at all times. The fans are formed by the coral polyps building on top of each other in a vertical formation. The growth of the fan is very dependant on the temperatures and current of the water. The bigger and more flexible of the fans are found in areas with consistent currents while stiffer shorter species are found in calmer areas. Brittles stars, algae and other species often call the fans their home.

Guest Testimonials This has been an amazing trip, even better than expected. Queensland. Best of East Coast Australia. This classic coastal run takes in thousands of kilometres of coastline. 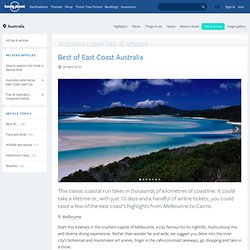 It could take a lifetime or, with just 10 days and a handful of airline tickets, you could taste a few of the east coast’s highlights from Melbourne to Cairns. 1. Melbourne Start this itinerary in the southern capital of Melbourne, a city famous for its nightlife, multicultural mix and diverse dining experiences. Rather than wander far and wide, we suggest you delve into the inner city’s bohemian and mainstream art scenes, linger in the cafe-colonised laneways, go shopping and take in a show. 2. Your next stop is the bright and breezy harbour city of Sydney. 3. Move north to Brisbane, Queensland’s fast-paced capital, where you can board a river cruise to go cuddle a koala or catch a ferry to Moreton Island and hand-feed a wild dolphin. 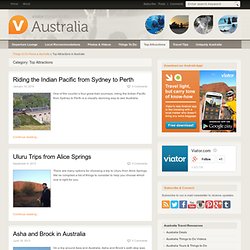