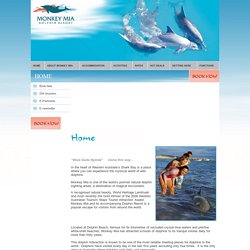 This dolphin interaction is known to be one of the most reliable meeting places for dolphins in the world. Dolphins have visited every day in the last five years excluding only four times. It is the only place in Australia where dolphins visit daily, not seasonally. With flawless blue skies and sunshine 320 days of the year, Monkey Mia is the ideal untouched Mediterranean-style holiday zone of the Southern Hemisphere for a leisurely getaway, romantic escape or outback adventure. Enjoy getting up close and personal with the dolphins directly in front of the Monkey Mia Dolphin Resort – only a handful of steps from your beach front accommodation. 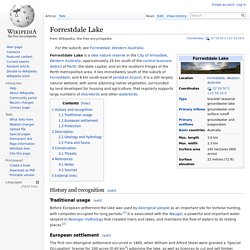 It lies immediately south of the suburb of Forrestdale, and 8 km south-east of Jandakot Airport. It is a still largely natural wetland, with some adjoining native vegetation, surrounded by land developed for housing and agriculture, that regularly supports large numbers of shorebirds and other waterbirds. History and recognition[edit] Traditional usage[edit] Before European settlement the lake was used by Aboriginal people as an important site for tortoise hunting, with campsites occupied for long periods.[1] It is associated with the Waugal, a powerful and important water serpent in Noongar mythology that created rivers and lakes, and maintains the flow of waters to its resting places.[2] European settlement[edit] Protection[edit]

Thomsons Lake. Thomsons Lake is a lake nature reserve in the City of Cockburn, Western Australia, approximately 25 km south of the central business district of Perth, the state capital, and on the southern fringes of the Perth metropolitan area. 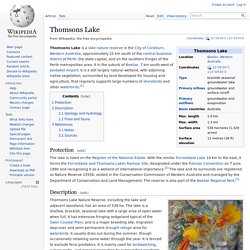 It in the suburb of Beeliar, 7 km south-west of Jandakot Airport. It is a still largely natural wetland, with adjoining native vegetation, surrounded by land developed for housing and agriculture, that regularly supports large numbers of shorebirds and other waterbirds.[1] Protection[edit] The lake is listed on the Register of the National Estate. Wedge island western australia. Vegetable seasons australia. Steak tartare perth. Zambero. Kaartdijin Noongar. Parkrun Australia. Kaartdijin Noongar. Yagan was born circa 1795 and died sometime in July 1833. 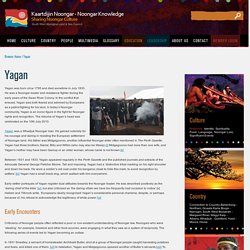 He was a Noongar leader and resistance fighter during the early years of the Swan River Colony. In the conflict that ensued, Yagan was both feared and admired by Europeans as a patriot fighting for his land. Heirisson Island. Coordinates: Southern section including remains of previous bridge structure Prior to development, there were two islands, surrounded by mudflats. 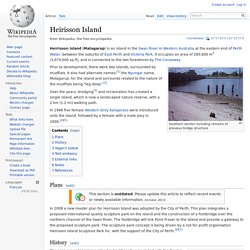 It also had alternate names;[1] the Nyungar name, Matagarup, for the island and surrounds related to the nature of the mudflats being "leg deep".[2] Over the years, dredging[3] and reclamation has created a single island, which is now a landscaped nature reserve, with a 2 km (1.2 mi) walking path. In 1998 five female Western Grey Kangaroos were introduced onto the island, followed by a female with a male joey in 2000.[4][5] §Plans[edit] 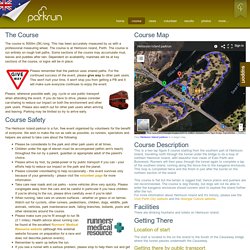 This has been accurately measured by us with a professional measuring wheel. The course is at Heirisson Island, Perth. The course is run entirely on rough trail paths. Flamenco dance perth. Jazz Fremantle - Home Page. Jazz Fremantle - Home Page. Events - City of Fremantle. The Norfolk Lanes Youth Music Festival is set to rock the Esplanade Youth Plaza on Sunday 26 October 2014 from 12.00 pm to 7.00 pm. 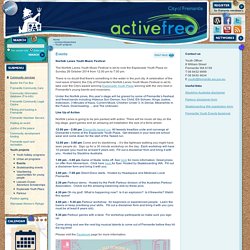 There is no doubt that there's something in the water in the port city. A celebration of the next wave of talent, the City of Fremantle's Norfolk Lanes Youth Music Festival is set to take over the City's award winning Esplanade Youth Plaza winning with the very best in Fremantle's young bands and musicians. The Fremantle Fishing Boat Harbour. Recipe spicy cauliflower potatoes peas. Recipe barbecued lemongrass chilli chicken vietnamese slaw. Historical reenactment in Australia. Historical reenactment in Australia has been occurring since at least the mid-1970s. 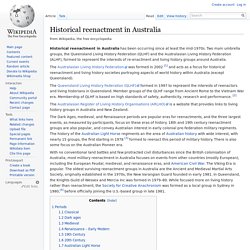 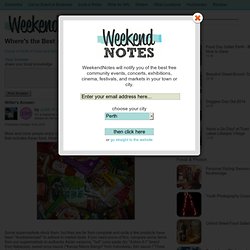 However it is not that easy to find them in our normal grocery shops. Some supermarkets stock them, but they are far from complete and quite a few products have been "Australianised" to adhere to market taste. If you need prove of this, compare some items from our supermarkets to authentic Asian versions: "hot" curry paste (try "Action A1" brand from Malaysia), sweet soya sauce ("Kecap Manis Bango" from Indonesia), fish sauce ("Three Crabs" from Vietnam), tea, chilli, noodles ... the list goes on. There is no need to feel bad about all these Australianisation of food. After all, they are doing it to our products, too. Sailing training perth. Get Connected Expo - 12 November 2013. Daruma doll. Daruma doll The Daruma doll (達磨, daruma?) 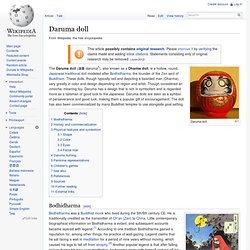 Create your own Bucket List. St. Patrick's Community Support Centre. Fremantle Volunteer Service - City of Fremantle. Volunteering is a fantastic way to give back to the local community allowing you to share your skills and knowledge and develop new ones. Along the way, you will also meet new people, get a better understanding of the local community and develop a sense of satisfaction in knowing that you are making a difference. If you're interested in volunteering but are unsure about where to start, contact the Fremantle Volunteer Service and attend an informal one-on-one session with our Volunteer Service Officer. Learn about the benefits of volunteering to both you and your community and meet local organisations supporting volunteers. Please phone if you would like to make an appointment for free, friendly no obligation advice.

Sebastian Terry 100 things. Kwinana Freeway. Planning for the Kwinana Freeway began in the 1950s, and the first segment in South Perth was constructed between 1956 and 1959. The route has been progressively widened and extended south since then. During the 1980s, the freeway was extended to South Street in Murdoch, and in June 2001, it reached Safety Bay Road in Baldivis. The final extension began as the New Perth Bunbury Highway project, constructed between December 2006 and September 2009. Perth. As part of Perth's role as the capital of Western Australia, the state's Parliament and Supreme Court are located within the city, as well as Government House, the residence of the Governor of Western Australia. Perth became known worldwide as the "City of Light" when city residents lit their house lights and streetlights as American astronaut John Glenn passed overhead while orbiting the earth on Friendship 7 in 1962.[10][11] The city repeated the act as Glenn passed overhead on the Space Shuttle in 1998.[12][13] Perth came 9th in the Economist Intelligence Unit's August 2012 list of the world's most liveable cities,[14] and was classified by the Globalization and World Cities Research Network in 2010 as a world city.[15] History[edit] Indigenous history[edit] The area where Perth now stands was called Boorloo by the Aborigines living there in 1827 at the time of their first contact with Europeans.

It certainly makes a spectacular finale to what the country has to offer. ‘Up north’, you’ll encounter all manner of photogenic landscapes. There's stunning gorges and waterfalls at Karijini National Park, and flaming red sunsets on Cable Beach near the enigmatic pearling town of Broome. Meanwhile, tiny Coral Bay gives you protected white sand beaches and a reef full of marine life. The Southwest offers some equally impressive beaches, expanses of wildflowers and lush green forests teeming with life. Wherever you go, wildlife-watching opportunities are extraordinary.