How our progressive tax system doesn't reach the ultra-rich. Sweating on every word – how ASIC massaged the banking message. "Sorry about this, it's obviously a huge deal for CFP [Commonwealth Bank's financial planning unit]. 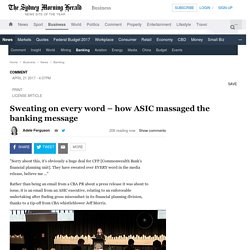 They have sweated over EVERY word in the media release, believe me ... " Rather than being an email from a CBA PR about a press release it was about to issue, it is an email from an ASIC executive, relating to an enforceable undertaking after finding gross misconduct in its financial planning division, thanks to a tip-off from CBA whistleblower Jeff Morris. This is a modal window. This modal can be closed by pressing the Escape key or activating the close button. Caption Settings Dialog Beginning of dialog window. ASIC Plot: Corporate Database Close to Sale. 'Fallen well short' of standards: Audit slams Immigration Department over Nauru and Manus Island contracts.

Billions of taxpayer dollars were handed to the private contractors running Australia's offshore detention centres without adequate authorisation or value-for-money assessments, the Commonwealth auditor has found. 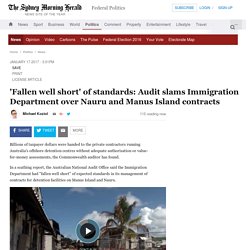 In a scathing report, the Australian National Audit Office said the Immigration Department had "fallen well short" of expected standards in its management of contracts for detention facilities on Manus Island and Nauru. This is a modal window. This modal can be closed by pressing the Escape key or activating the close button. Caption Settings Dialog Beginning of dialog window. Witness testifies against Sara Connor Audit slams Immigration Department over ... Sussan Ley controversy reopens debate about federal ICAC. There is a certain predictability to the way scandals play out in Canberra. 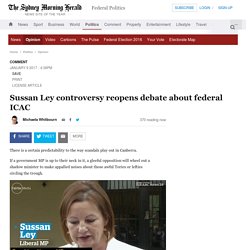 'Outrageous': Coal mine gets expansion nod despite secret, incomplete studies. The Baird government has approved the expansion of the most aggressive coal mine in the Special Areas of Greater Sydney's catchment despite not knowing the compounding impact it will have on water supplies. 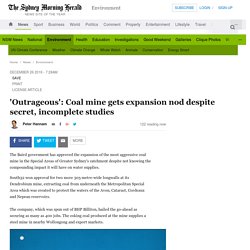 South32 won approval for two more 305 metre-wide longwalls at its Dendrobium mine, extracting coal from underneath the Metropolitan Special Area which was created to protect the waters of the Avon, Cataract, Cordeaux and Nepean reservoirs. There is nothing illegal about Stephen Conroy's new job - but it smells bad.

Year's end can be a contemplative time, a time when we reassess our lives or even commit to changes to embrace in the New Year. 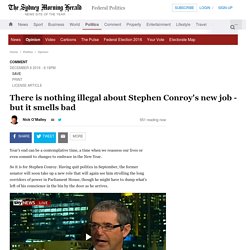 So it is for Stephen Conroy. Having quit politics in September, the former senator will soon take up a new role that will again see him strolling the long corridors of power in Parliament House, though he might have to dump what's left of his conscience in the bin by the door as he arrives. This is a modal window. This modal can be closed by pressing the Escape key or activating the close button. Captions Settings Dialog Beginning of dialog window. Economy goes backward. Federal donations system: The rules stink! You know it, I know it and most MPs know it too. We are having the wrong conversation. 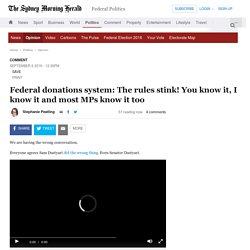 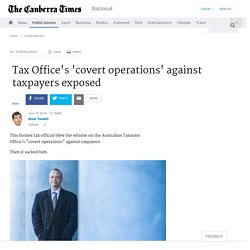 Then it sacked him. Former ATO intelligence analyst Ron Shamir is now pitted in a David and Goliath legal struggle with his former public service bosses who are bringing the full might of the Commonwealth government to bear as they try to silence him. The legal battle with the Tax Office has left Mr Shamir $200,000 in debt and struggling with health problems, simply, he says, for doing his job as a public official. Corruption and crime syndicates threaten Australia's border security. Michael Pezzullo, Secretary of the Department of Immigration and Border Protection. 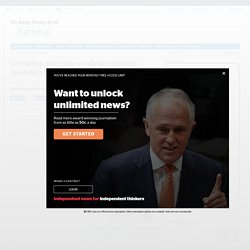 Photo: Alex Ellinghausen Bark but no bite: Independent senator Nick Xenophon has called for greater powers for corruption investigators. Photo: Paul Jeffers Indian community leader Jasvinder Sidhu says Indian nationals who have paid unscrupulous bosses to sponsor them have been exploited. Sydney will be unrecognisable now that the planners have gone. Loaded: 0% Progress: 0% Protestors shut down council meeting Sacked mayors and councillors seized control of a Sydney council chamber after hundreds of protestors forced the meeting to be shut down. 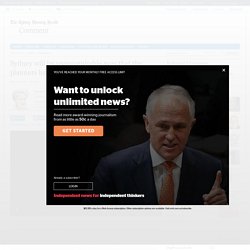 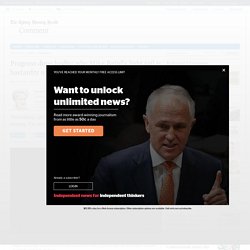 Why Arthur Sinodinos fails the pub test. Loaded: 0% Progress: 0% Arthur Sinodinos under pressure There are calls for the Senator to step down after questions were raised about the source of millions of dollars of donations to the NSW Liberal Party. Courtesy ABC News24. When a Queanbeyan-based Liberal Party official rang the party's head office in Sydney prior to the 2011 NSW election, he had some good news and some bad news. Auburn council had valuation showing Salim Mehajer's car park deal was worth extra $5 million.

Loaded: 0% Progress: 0% Salim Mehajer: The year in review A look back on the biggest year in the life of Auburn's colourful deputy mayor Salim Mehajer. Auburn council voted to sell its colleague Salim Mehajer prime council land despite a month earlier commissioning its own valuation that found the land was worth $5 million more than the sale price. Auburn deputy mayor Salim Mehajer said he did not read into the valuation of the John Street car park. "It's scandalous," said Labor councillor George Campbell. One month ago the council, led by Cr Mehajer's close ally Ned Attie, voted to sell to its colleague a car park in John Street, Lidcombe. Cr Mehajer plans to turn the block into a 96-unit residential complex with additional retail space.

Cr Attie's motion had the council sell the car park at a value of $8.5 million, according to a price recommended to council by McGees valuers. Workers missing out on $2.6b in super. A staggering 6.8 per cent of the Australian workforce, or more than 690,000 workers, are losing $2.6 billion a year from employers failing to pay them some or all of their compulsory superannuation contributions. A report released to The Australian Financial Review shows that non-compliance is growing at 5 per cent a year, bringing the accumulated losses to $44 billion by 2023. The report, prepared by Tria Investment Partners for the $30-billion plus super fund Cbus, found employers in the building and construction industry were the worst offenders, followed by property services, mining, hospitality and manufacturing.

By law, employers must contribute 9.5 per cent of an employee's salary into a super fund. Failure to pay super contributions means the Australian Taxation Office is losing hundreds of millions of dollars a year in lost revenue at a time when the government is looking for ways to grow revenue and reduce costs, including looking at super as part of a reform to the tax system. Workers owed $2.6b in unpaid super as government tries to reduce penalties. Dan Warne was paid a superannuation debt after six months of "hassling". Photo: Pat Scala. The 'institute' with no members embarrasses Senate committee. 'This seems to be what the Americans call astroturfing': Senator Nick Xenophon. Labor attacks Malcolm Turnbull over investments in Cayman Islands tax haven.

Rezoning open to routine corruption by both sides of politics: economist. Urban sprawl: An economist says billions in economic benefit are extracted by well-connected landowners through political rezoning decisions. Photo: Craig Abraham The rezoning of land by state governments across Australia is so open to routine corruption and manipulation by a "mates network" among both major political parties that a cooling off period is needed before former MPs or their bureaucrats work in the property industry, an industry expert says. Billions of dollars of economic benefit are being regularly extracted from the general population by well-connected landowners through political rezoning decisions, according to economist Cameron Murray, an expert on land supply in Queensland.

Call on CommBank Royal Commission disappointing and shallow. Australia: You Wouldn't Steal a DVD, But You Would Block Websites and Suspend Internet Accounts. When the Australian government first began requiring Internet Service Providers (ISPs) to block websites in 2012, Australians were assured that it would only be used to block the "worst of the worst" child pornography. Laws of the land make Facebook fantasies come true. Illustration: Kerrie Leishman. Facebook is a special place. Environment Protection Authority to be investigated following string of controversies. Pensioners lose savings in government cash grab. System that awarded scholarship to Frances Abbott is still a mystery.