TWC boosts its internet speeds to counter Google Fiber. It's amazing what the addition of a little competition into a natural monopoly can do. 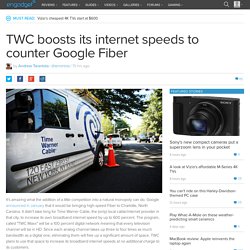 Google announced in January that it would be bringing high-speed Fiber to Charlotte, North Carolina. It didn't take long for Time Warner Cable, the (only) local cable/internet provider in that city, to increase its own broadband internet speed by up to 600 percent. The program, called "TWC Maxx" will be a 100 percent digital network meaning that every television channel will be in HD.

Since each analog channel takes up three to four times as much bandwidth as a digital one, eliminating them will free up a significant amount of space. TWC plans to use that space to increase its broadband internet speeds at no additional charge to its customers. Per the TWC release: What's more, the company plans to offer its Ultimate service for just $65, five bucks cheaper than Google's Fiber service. Telstra public phone booths to get new life as two million public Wi-Fi hotspots.

Telstra’s forgotten public phone booths will be given an added function as Wi-Fi hotspots as part of a plan to blanket public spaces with internet access. 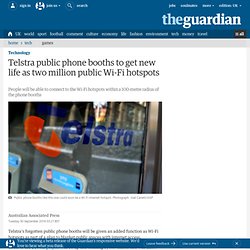 Trials of the $100m project will be up and running by November and will allow Telstra customers who agree to share their bandwidth to get free access to any hotspot. The data they use will be deducted from their home allowance. Non-Telstra customers, and those who don’t share their home connection, will be able to connect for an as yet undisclosed fee. The first 100 of the planned two million hotspots will be available for free on a trial basis within weeks, said Telstra’s group executive of retail, Gordon Ballantyne, on Tuesday. He also revealed that many of the hotspots will be repurposed public phones. The booths have struggled for relevance in the smartphone era, but they are ideal hotspot sites because most are located in busy areas and connected to high-speed fibre cabling.

Google helps build 'Faster' cable under Pacific Ocean. 12 August 2014Last updated at 07:54 ET The cable will connect the US west coast with Japan Google and five other large companies are teaming up to build a cable under the Pacific Ocean that will deliver incredibly fast internet speeds. 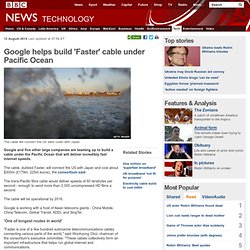 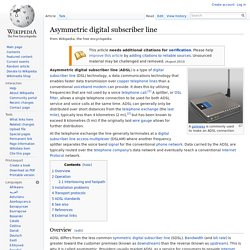 It does this by utilizing frequencies that are not used by a voice telephone call.[1] A splitter, or DSL filter, allows a single telephone connection to be used for both ADSL service and voice calls at the same time. ADSL can generally only be distributed over short distances from the telephone exchange (the last mile), typically less than 4 kilometres (2 mi),[2] but has been known to exceed 8 kilometres (5 mi) if the originally laid wire gauge allows for further distribution. Overview[edit] There are both technical and marketing reasons why ADSL is in many places the most common type offered to home users. Operation[edit] Frequency plan for ADSL Annex A. 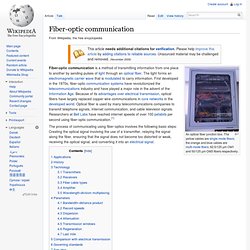 The yellow cables are single mode fibers; the orange and blue cables are multi-mode fibers: 62.5/125 µm OM1 and 50/125 µm OM3 fibers respectively. Fiber-optic communication is a method of transmitting information from one place to another by sending pulses of light through an optical fiber. The light forms an electromagnetic carrier wave that is modulated to carry information. First developed in the 1970s, fiber-optic communication systems have revolutionized the telecommunications industry and have played a major role in the advent of the Information Age.

Because of its advantages over electrical transmission, optical fibers have largely replaced copper wire communications in core networks in the developed world. Google fiber. Optical fiber. A bundle of optical fibers Stealth Fiber Crew installing a 432-count fiber cable underneath the streets of Midtown Manhattan, New York City A TOSLINK fiber optic audio cable with red light being shone in one end transmits the light to the other end History[edit] Daniel Colladon first described this “light fountain” or “light pipe” in an 1842 article titled On the reflections of a ray of light inside a parabolic liquid stream. 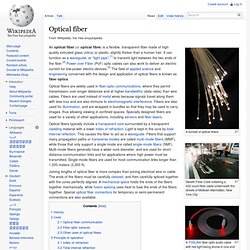 This particular illustration comes from a later article by Colladon, in 1884. Guiding of light by refraction, the principle that makes fiber optics possible, was first demonstrated by Daniel Colladon and Jacques Babinet in Paris in the early 1840s. Practical applications, such as close internal illumination during dentistry, appeared early in the twentieth century. A variety of other image transmission applications soon followed. Digital Revolution. Internet in Australia. Internet access was first available in Australia to universities via AARNet in 1989.[1][2][3] The first commercial dial-up ISPs (Internet Service Providers) appeared in capital cities soon after[4] and by the mid-1990s almost the entire country had a wide choice of dial-up Internet access providers.[5] In present times Internet access is available through a range of technologies, chiefly hybrid fibre coaxial cable, DSL (digital subscriber line), ISDN and satellite Internet. 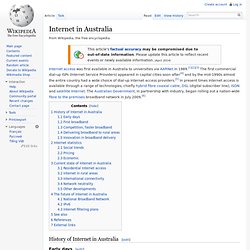 The Australian Government, in partnership with industry, began rolling out a nation-wide fibre to the premises broadband network in July 2009.[6] History of Internet in Australia[edit] Early days[edit] The first permanent circuit connecting AARNet to ARPANet using TCP/IP over X.25 was established in May 1989. It linked the University of Melbourne with the University of Hawaii via a 2400-bit/s (bits per second) satellite connection.

In 1992 there were two commercial ISPs competing with one another. National Broadband Network. Fixed line and wireless broadband connections are sold to retail service providers (RSP), who then sell Internet access and other services to consumers. 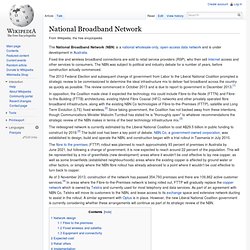 The NBN was subject to political and industry debate for a number of years, before construction actually commenced. The 2013 Federal Election and subsequent change of government from Labor to the Liberal National Coalition prompted a strategic review to be commissioned to determine the ideal infrastructure mix to deliver fast broadband across the country as quickly as possible. The review commenced in October 2013 and is due to report to government in December 2013.[1] The redesigned network is currently estimated by the Liberal National Coalition to cost A$29.5 billion in public funding to construct by 2019.[2] The build cost has been a key point of debate. 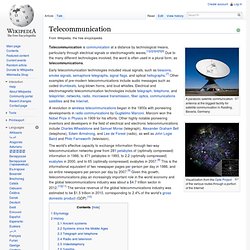 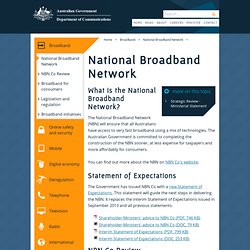 The National Broadband Network (NBN) will ensure that all Australians have access to very fast broadband using a mix of technologies. The Australian Government is committed to completing the construction of the NBN sooner, at less expense for taxpayers and more affordably for consumers. You can find out more about the NBN on NBN Co's website. Statement of Expectations The Government has issued NBN Co with a new Statement of Expectations. Outsourcing jobs to new zealand.