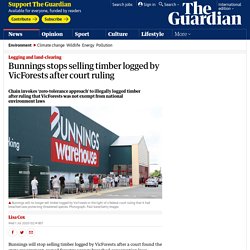 “Bunnings has a zero-tolerance approach to illegally logged timber that dates back two decades and our commitment is to only source timber products from legal and well managed forest operations,” Bunnings’ director of merchandise, Phil Bishop, said on Wednesday. Forest Governance and Legality. How-to-lose-water-waste-money-and-wreck-the-environment-20190305-p511ti.

Timber harvesting does not increase fire risk and severity wfsvogqmcxki. Forestry industry out on a limb. ‘Effectively, for the world to become self-sustaining we’ve got to be able to increase productivity.’ 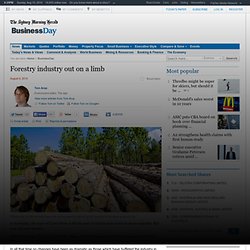 In its heyday, the town of Cann River in the far east of Victoria was home to seven sawmills. But now just one remains . Bob Humphreys, 70, has run it for 43 years. As a boy he spent school holidays working at the mill. In all that time no changes have been as dramatic as those which have buffeted the industry in the past five years. The sun could be setting on operations such as this pulp mill at South East Fibre Exports in Eden in NSW. ‘‘Our critical mass has shrunk to such an extent that sooner or later it will no longer be viable.

Advertisement Forestry is one of the most disrupted industries in the country. A perpetual and heated environmental contest hangs over native logging, and plantation growers are still dealing with legacies from shambolic tax breaks and collapses. The Australia Institute. 10 years of ensuring there are none. Saturday soapbox: ‘Old thinking’ will cost Tasmania jobs. Tasmania must factor in changing wood supply and market preference. 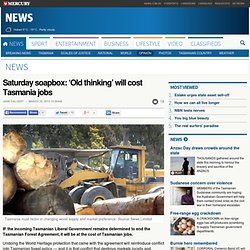 Source: News Limited IF the incoming Tasmanian Liberal Government remains determined to end the Tasmanian Forest Agreement, it will be at the cost of Tasmanian jobs. Undoing the World Heritage protection that came with the agreement will reintroduce conflict into Tasmanian forest policy — and it is that conflict that destroys markets locally and globally. If markets stop taking Tasmanian timber, investment in the industry will disappear and jobs will be lost. It doesn’t have to be this way. The Liberal Party’s policy it took to the election will become its biggest test in government. Victorian forestry is definitely not ecologically sustainable. By any scientific yardstick, forestry operations in Victoria cannot be regarded as ecologically sustainable. 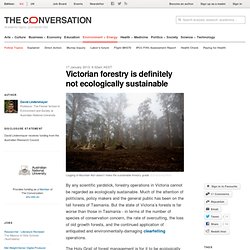 Much of the attention of politicians, policy makers and the general public has been on the tall forests of Tasmania. But the state of Victoria’s forests is far worse than those in Tasmania - in terms of the number of species of conservation concern, the rate of overcutting, the loss of old growth forests, and the continued application of antiquated and environmentally-damaging clearfelling operations. The Holy Grail of forest management is for it to be ecologically sustainable. Ecologically Sustainable Forest Management (ESFM) is defined as: Greater Glider habitat and local jobs exported to China. … and cut for firewood. 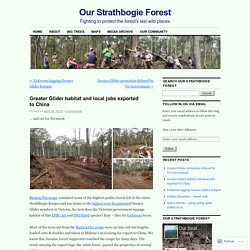 Approaches to the landing are a bomb-site. Vicforests’ ‘world’s best practice’ threatened species management Snig tracks criss-cross the coupe Barjarg Flat coupe contained some of the highest quality forest left in the entire Strathbogie Ranges and was home to the highest ever documented Greater Glider numbers in Victoria. So, how does the Victorian government manage habitat of this EPBC Act and FFG-listed species? Most of the trees cut from the Barjarg Flat coupe were cut into sub 6m lengths, loaded onto B-doubles and taken to Midway’s in Geelong for export to China. We estimate that at least 60% of timber from the coupe was exported to China via Midway. White Iveco B-double leaving Barjarg Flat coupe. Here, with three stacks of logs .. on Police Tk, Lima South. The same truck, different load, on another day. 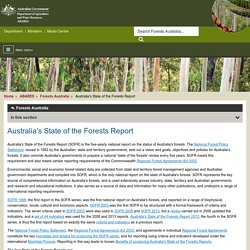 The National Forest Pol​icy Statement, issued in 1992 by the Australian, state and territory governments, sets out a vision and goals, objectives and policies for Australia's forests. It also commits Australia's governments to prepare a national 'state of the forests' review every five years. SOFR meets this requirement and also meets certain reporting requirements of the Commonwealth Regional Forest Agreements Act 2002. 52 A closer look at rainforests worksheet. 1301.0 - Year Book Australia, 1926. This page was updated on 22 Nov 2012 to include the disclaimer below. 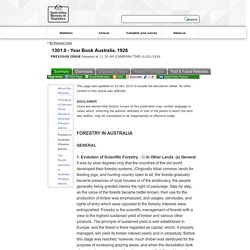 No other content in this article was affected.DISCLAIMER: Users are warned that historic issues of this publication may contain language or views which, reflecting the authors' attitudes or that of the period in which the item was written, may be considered to be inappropriate or offensive today. 1. Evolution of Scientific Forestry. - (i) In Other Lands. (a) General. Greater Glider habitat and local jobs exported to China.