Untitled. Bushfire smoke could cause lung problems for generations, US monkey study suggests. Updated 29 Jan 2020, 3:05amWed 29 Jan 2020, 3:05am Monkeys in Northern California are providing valuable clues to the health cost of exposure to bushfire smoke, revealing it could have potentially life-threatening consequences for humans. Key points: Scientists have studied the impact of bushfire smoke on monkeys since 2008The monkeys exposed to smoke had 20 per cent less lung capacity There are fears that prolonged exposed to smoke could affect human health.

Is fragile masculinity the biggest obstacle to climate action? Opinion. 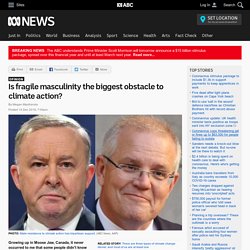 The USA, and Australian forests under extreme pressure - The Science Show - ABC Radio National. Robyn Williams: Renowned writer Jared Diamond is based at the University of California, Los Angeles, from where he views America with intense dismay. 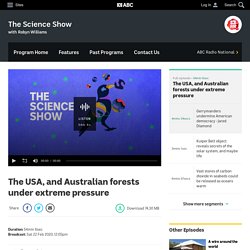 Jared Diamond: When Obama was elected in 2016, the Republicans announced at the beginning; 'We are against anything that Obama does. We won't consider policy on its merits, we just oppose.' That political polarisation, that is a step downhill down a slippery slope towards the United States in effect becoming a dictatorship, and I see real risk that within the next five years the United States will no longer be a democracy but will be an irreversible dictatorship. New Study Shows That Old, Big Trees Absorb Carbon Faster. Researchers Place $6 Trillion Value On Mental Health Benefits Provided By Protected Areas. There's a hefty economic value to getting outdoors in national parks and other protected areas when it comes to mental healthcare/Kurt Repanshek file It's often noted that getting out into nature is good for the soul, both from physical and mental health standpoints. 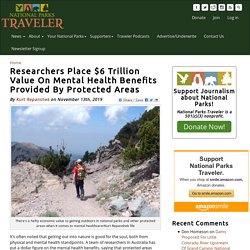 A team of researchers in Australia has put a dollar figure on the mental health benefits, saying that protected areas such as national parks around the world provide $6 trillion in benefits. "Nature exposure improves human mental health and wellbeing. Poor mental health imposes major costs on human economies. Therefore, parks have an additional economic value through the mental health of visitors," they write in the abstract to their paper, Economic Value of Protected Areas Via Visitor Mental Health. Pine woodland restoration creates haven for birds in Midwest, MU study finds. Millions of acres of pine woodlands once covered a large portion of the Midwest. 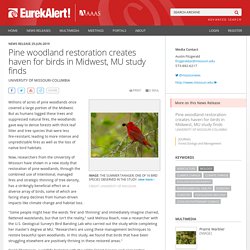 But as humans logged these trees and suppressed natural fires, the woodlands gave way to dense forests with thick leaf litter and tree species that were less fire-resistant, leading to more intense and unpredictable fires as well as the loss of native bird habitats. Now, researchers from the University of Missouri have shown in a new study that restoration of pine woodlands, through the combined use of intentional, managed fires and strategic thinning of tree density, has a strikingly beneficial effect on a diverse array of birds, some of which are facing sharp declines from human-driven impacts like climate change and habitat loss.

Dark Mofo art rebuilding bushfire-devastated Huon Valley in Tasmania. Posted about 4 hours agoSun 16 Jun 2019, 9:17pm Almost 30 tourists braved wild winds, freezing weather and heavy rain to listen to a recording of 2,000 ravens in a forest area that only four months ago was surrounded by bushfires. 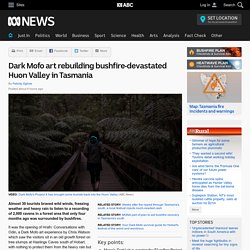 Key points: Mona's DarkLab is running the $2 million Project X to use art to help bushfire-affected communities recoverHrafn: Conversations with Odin involves art lovers listening to the recording of 2,000 ravens in old growth forest at Hastings CavesThere is concern that the money is shared out to benefit all communities in the Huon Valley It was the opening of Hrafn: Conversations with Odin, a Dark Mofo art experience by Chris Watson which saw the visitors sit in an old growth forest on tree stumps at Hastings Caves south of Hobart, with nothing to protect them from the heavy rain but raincoats and plastic ponchos.

The rain became so heavy and the wind was so loud, it almost drowned out the sound of the recorded ravens. Trees, the ancient Macedonians, and the world's first environmental disaster. It’s a simple enough equation: good soil is the key to good food. 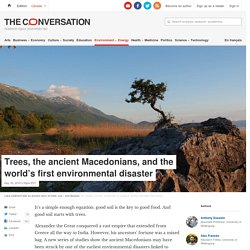 And good soil starts with trees. Alexander the Great conquered a vast empire that extended from Greece all the way to India. However, his ancestors’ fortune was a mixed bag. Wood wide web: Trees' social networks are mapped. Media playback is unsupported on your device Research has shown that beneath every forest and wood there is a complex underground web of roots, fungi and bacteria helping to connect trees and plants to one another. 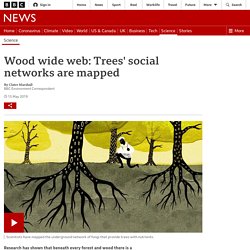 Our native plants and animals are under stress from climate change, and Victoria’s natural areas may never be the same again. 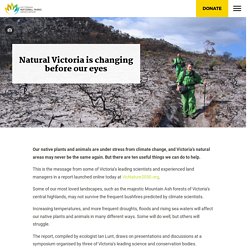 But there are ten useful things we can do to help. This is the message from some of Victoria’s leading scientists and experienced land managers in a report launched online today at VicNature2050.org. Some of our most loved landscapes, such as the majestic Mountain Ash forests of Victoria’s central highlands, may not survive the frequent bushfires predicted by climate scientists. Increasing temperatures, and more frequent droughts, floods and rising sea waters will affect our native plants and animals in many different ways. Fixing Australia’s extinction crisis means thinking bigger than individual species. The world’s largest assessment of biodiversity recently shared the alarming news that 1 million species are under threat of extinction. 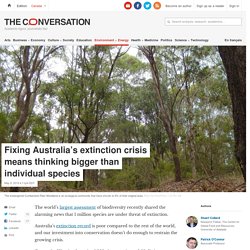 Australia’s extinction record is poor compared to the rest of the world, and our investment into conservation doesn’t do enough to restrain the growing crisis. Currently, 511 animal species, 1,356 plant species and 82 distinct “ecological communities” – naturally occurring groups of native plants, animals and other organisms – are listed as nationally threatened in Australia. When trees make rain: Could restoring forests help ease drought in Australia? - Science News - ABC News. If you've ever walked in a rainforest or even a greenhouse, you'll know that the air inside is heavy with moisture. This phenomenon is caused by trees releasing water vapour through pores in their leaves called stomata. We also know that many big forests, and rainforests in particular, tend to get more rain than surrounding areas — hence the name. Although people have guessed that forests could help make rain, it's always been a chicken-or-egg scenario: do forests make rain or do areas with high rainfall grow forests?

An expanding body of evidence supports the idea that forests, in the right conditions, not only make rain locally but also hundreds of kilometres away. In Australia, we've cut down nearly 40 per cent of our forests in the past 200 years, leaving a fragmented landscape in their place. Record numbers of Australia's wildlife species face 'imminent extinction' Regional forest agreements have failed in the 20 years since they were established by state governments, says a new report, which reveals that record numbers of threatened forest dwelling fauna and many species are heading towards imminent extinction. 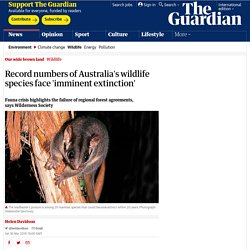 500 years of drought and flood: trees and corals reveal Australia's climate history. Australia is the land of drought and flooding rains, and in a recent paper we’ve shown that’s been the case for more than 500 years. As part of our Australia and New Zealand Drought Atlas we’ve published the most detailed record of drought and wet periods (or “pluvials”) since 1500. The data reveal that despite the severity of the Millennium Drought, the five worst single years of drought happened before 1900. But 2011 was the wettest year in our 513-year record. When women make decisions, the environment benefits. 'Whole thing is unravelling': climate change reshaping Australia's forests. Australia’s forests are being reshaped by climate change as droughts, heat waves, rising temperatures and bushfires drive ecosystems towards collapse, ecologists have told Guardian Australia.

Trees are dying, canopies are getting thinner and the rate that plants produce seeds is falling. How-to-lose-water-waste-money-and-wreck-the-environment-20190305-p511ti.

21 reasons why forests are important. Forests cover a third of all land on Earth, providing vital organic infrastructure for some of the planet's densest, most diverse collections of life. CBD Home. Gone feral: The cats devouring our wildlife. Logging the Fairy Possum to extinction. Theconversation. Untitled.