Guest opinions: Does Seattle need to raise minimum wage to $15? Originally published January 25, 2014 at 4:33 PM | Page modified January 27, 2014 at 8:22 PM Judith Gill: A neighborhood business can't support a $15 minimum wageGerald Hankerson: Raise wages to reduce racial income inequalitySandi Halimuddin: College graduates need the minimum wage to rise A neighborhood business can't support a $15 minimum wage By Judith Gille Special to The Times Gabriel Campanario / The Seattle Times AT the risk of alienating my friends and employees, I'd like to weigh in against the rush to pass a $15 minimum-wage law. 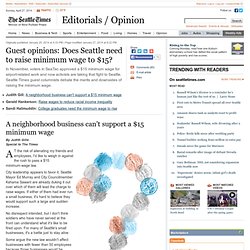 Part of a series on income inequality in the San Francisco Bay Area If you want to understand the tension between tech workers in San Francisco, who often make six figures, and many of the city's other residents, try standing on the southwest corner of 24th Street and Valencia around 7:30 on a weekday morning. That corner is in the Mission District, a historically working-class and heavily Latino neighborhood. In front of them, there's a public bus shelter. This is the sound of the private tech shuttles: sleek, unmarked double-deckers with tinted windows. Tech companies like Google, Yahoo and Apple have locations in Silicon Valley, about an hour's drive south of the city. 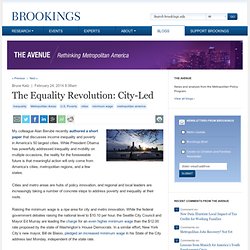 While President Obama has powerfully addressed inequality and mobility on multiple occasions, the reality for the foreseeable future is that meaningful action will only come from America’s cities, metropolitan regions, and a few states. Cities and metro areas are hubs of policy innovation, and regional and local leaders are increasingly taking a number of concrete steps to address poverty and inequality at their roots. Raising the minimum wage is a ripe area for city and metro innovation. While the federal government debates raising the national level to $10.10 per hour, the Seattle City Council and Mayor Ed Murray are leading the charge for an even higher minimum wage than the $12.00 rate proposed by the state of Washington’s House Democrats. Finally, cities and metro areas are tackling the economic gap through affordable housing initiatives.

Study-finds-greater-income-inequality-in-nations-thriving-cities. WASHINGTON — If you want to live in a more equal community, it might mean living in a more moribund economy. 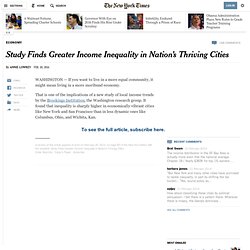 That is one of the implications of a new study of local income trends by the , the Washington research group. It found that inequality is sharply higher in economically vibrant cities like New York and San Francisco than in less dynamic ones like Columbus, Ohio, and Wichita, Kan. The study, released on Thursday, comes as a number of cities across the country are trying to tackle income inequality and expand opportunity through measures like increasing the minimum wage, which President Obama has promised to do at the federal level. In no city is the effort more prominent than in New York, where the new mayor, Bill de Blasio, has promised higher taxes for rich families and better services for poor ones, including expanded early-childhood education and affordable-housing developments.

All Cities Are Not Created Unequal. In December 2013, President Obama gave a speech on economic mobility, in which he called income inequality and lack of upward mobility “the defining challenge of our time.” 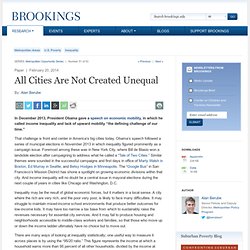 That challenge is front and center in America’s big cities today. Obama’s speech followed a series of municipal elections in November 2013 in which inequality figured prominently as a campaign issue. Foremost among these was in New York City, where Bill de Blasio won a landslide election after campaigning to address what he called a “Tale of Two Cities.” Similar themes were sounded in the successful campaigns and first days in office of Marty Walsh in Boston, Ed Murray in Seattle, and Betsy Hodges in Minneapolis.

The “Google Bus” in San Francisco’s Mission District has shone a spotlight on growing economic divisions within that city. Inequality may be the result of global economic forces, but it matters in a local sense. The latest U.S. However, some cities are much more unequal than others. Decline Of The US Middle Class. 2012 U.S. 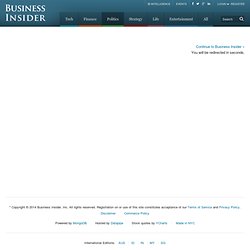 Census data released last week doesn’t look good for the middle class, with median household income, income growth, and share of the total national income all continuing to decline. Liberal think tank Center for American Progress published several charts on these despressing trends (re-posted below). David Madland, the Director of the American Worker Project, thinks that the trends will continue, barring major policy changes in the government. “My expectation going forward is that median household income will be stagnant while the incomes for the wealthiest will increase significantly,” Madland told Business Insider.