The scariest thing about Brussels is our reaction to it. Think like the enemy. 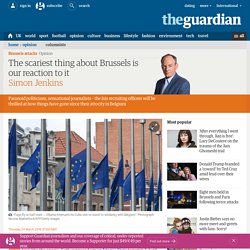 Let’s suppose I am an Islamic State terrorist. I don’t do bombs or bullets. I leave the dirty work to the crazies in the basement. Nicolas Henin: The man who was held captive by Isis for 10 months says how they can be defeated. A French journalist who was held hostage by Isis for 10 months has spoken out against air strikes in Syria, saying they represent “a trap” for Britain and other members of the international community. 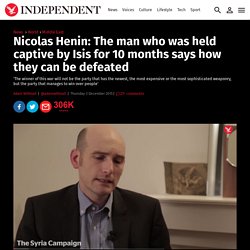 Speaking in an interview with The Syria Campaign, Nicolas Henin put forward his strategy for combatting the militant group – a no-fly zone in opposition-held areas of Syria. Mr Henin has previously spoken about how he was held for seven months in Syria itself, and how British national Mohammed Emwazi – known as Jihadi John – was among the jailors who subjected him to physical and psychological torture. "Strikes on Isis are a trap,” he said. “The winner of this war will not be the party that has the newest, the most expensive or the most sophisticated weaponry, but the party that manages to win over the people on its side.” 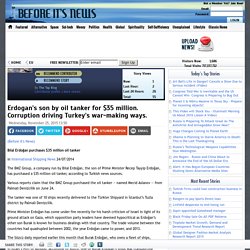 Various reports claim that the BMZ Group purchased the oil tanker — named Mecid Aslanov — from Palmali Denizcilik on June 24. The tanker was one of 10 ships recently delivered to the Türkter Shipyard in İstanbul’s Tuzla district by Palmali Denizcilik. Prime Minister Erdoğan has come under fire recently for his harsh criticism of Israel in light of its ground attack on Gaza, which opposition party leaders have deemed hypocritical as Erdoğan’s other son Burak is known for business dealings with that country.

The trade volume between the countries had quadrupled between 2002, the year Erdoğan came to power, and 2013. Erdogan’s Daughter Joins ISIS. TEHRAN (FNA)- A discontented nurse working clandestinely for a covert medical corps in Şanlıurfa—a city in Southeastern Turkey, close to the border with neighboring Syria— divulged information about the alleged role which Sümeyye Erdogan plays in providing extended medical care for ISIL wounded militants transferred to Turkish hospitals. 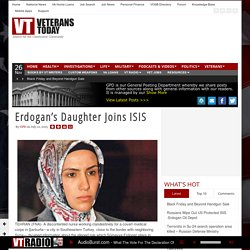 Living in a dilapidated apartment in Istanbul’s outskirts along with her two children, a 34-year- old emaciated nurse who spoke on the condition of anonymity for fear of retribution, disclosed her seven-week agonizing ordeal of working in secret military hospital in Şanlıurfa, 150 km (93 miles) East of Gaziantep and 1,300 km (808 miles) Southeast of Istanbul, Global Research News reported. “Almost every day several khaki Turkish military trucks were bringing scores of severely injured, shaggy ISIL rebels to our secret hospital and we had to prepare the operating rooms and help doctors in the following procedures,” she said. 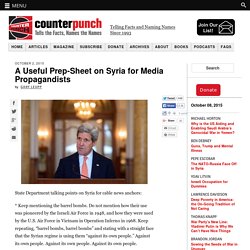 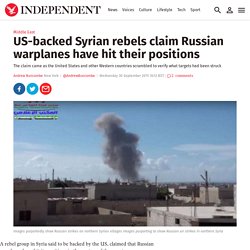 The group, known as Tajamu Alezzah, wrote with heavy sarcasm on Twitter on Wednesday that “eradicating terrorism appears to begin with attacks” on its locations in the central city of Latamna in the province of Hama, according to the Associated Press. The group, which boasts of having TOW missiles, did not provide specific details on the targets or how it can ascertain the strikes were by Russian jets.

Russia has been bombing targets in Syria Over the last few years, Washington has equipped and trained a number of so-called moderate Syrian rebel groups but most have been crushed by al-Qaida's affiliate in Syria, or Isis. A senior US official said Russia's airstrikes in Syria did not appear to be targeting the Islamic State group, also known as Isis, but other opposition groups fighting against Syrian President Bashar Assad. 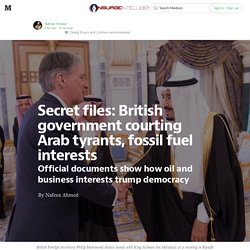 The approach reflects the consistent focus of Britain’s strategy in the region on promoting “stability” through energy investments and arms sales with authoritarian regimes and outright dictatorships. Responding to an FOI request in February, the UK Foreign & Commonwealth Office (FCO) Middle East and North Africa Directorate provided a list of meetings hosted by other governments or companies attended by Edward Oaken, then the FCO’s Director for the Middle East. The Six-Letter Text Message That Led the CIA to the Mastermind of 9/11. Khalid Sheikh Mohammed after his capture in 2003. 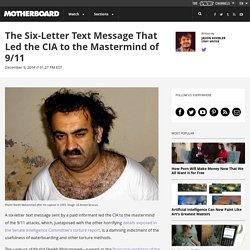 Image: US Armed Services​ A six-letter text message sent by a paid informant led the CIA to the mastermind of the 9/11 attacks, which, juxtaposed with the other horrifying ​details exposed in the Senate Intelligence Committee's torture report, is a damning indictment of the usefulness of waterboarding and other torture methods. The capture of Khalid Sheikh Mohammed—named as the "​principal architect of the 9/11 attacks" by the 9/11 Commission Report—was primarily attributed in the torture report to old-school intelligence work. In fact, the torture report suggests that there are "no CIA records to support the assertion that [two tortured suspects] Abu Zubaydah, Ramzi bin al-Shibh, or any other CIA detainee played any role in the planning and execution of the operation that captured Khalid Sheikh Mohammed.

" 'There is no silver bullet': Isis, al-Qaida and the myths of terrorism. Fourteen years ago, in the immediate aftermath of the 9/11 attacks, a series of misconceptions about Osama bin Laden and al-Qaida became widely accepted. 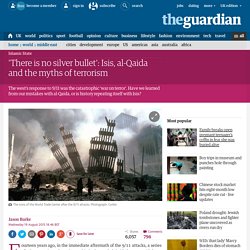 Some focused on the person of Bin Laden himself – his wealth, health and history. The group that he led, until then relatively marginal with no real support base and only a few hundred members, was portrayed as a sprawling global terrorist organisation, with obedient “operatives” and “sleeper cells” on every continent, and an ability to mobilise, radicalise and attack far beyond its real capacities. Historic incidents with no connection to the group or its leader were suddenly recast as “al-Qaida operations”.

Any incident, anywhere in the world, could become an al-Qaida attack. This had an impact on the western reaction to the events of 11 September 2001. How to explain the mess created by US wars in the Middle East: just blame Iran. Blaming Iran for sectarianism in Iraq and the consequences of the US wars in the wider Middle East is against all historical facts. 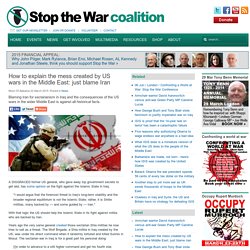 A DISGRACED former US general, who gave away top government secrets to get laid, has some opinion on the fight against the Islamic State in Iraq: "I would argue that the foremost threat to Iraq’s long-term stability and the broader regional equilibrium is not the Islamic State; rather, it is Shiite militias, many backed by — and some guided by — Iran. " With that logic the US should help the Islamic State in its fight against militia who are backed by Iran. Jeremy Scahill: Why is President Obama Keeping Yemeni Journalist Abdulelah Haider Shaye in Prison? This is a rush transcript. Copy may not be in its final form. JUAN GONZALEZ: We’re going to turn now to Yemen. Obama officials' spin on Benghazi attack mirrors Bin Laden raid untruths. Almost immediately after President Obama announced the killing of Osama bin Laden, top government officials, including then-CIA Director Leon Panetta and top terrorism adviser John Brennan, made numerous false statements about what took place.

That included the claim that Bin Laden was killed after he engaged in a "firefight", that he used his wife as a human shield to protect himself, and that he was living in luxury in a $1m mansion. None of those claims, central to the story the White House told the world, turned out to be true. Bin Laden was unarmed and nobody in the house where Bin Laden was found ever fired a single shot (a courier in an adjacent guest house was the only one to shoot, at the very beginning of the operation). Bin Laden never used his wife or anyone else as a shield. The farce of US - UK bombing in Iraq: ISIS still advancing towards Baghdad. Air strikes have not halted Isis because it has shown itself to be highly adaptable and is still able to operate effectively despite US, French and UK intervention. Iraqi army shows no sign of being able to mount successful counter-attack against Isis. US AIR STRIKES are failing to drive back Isis in Iraq where its forces are still within an hour’s drive of Baghdad.

Three and a half months since the Iraqi army was spectacularly routed in northern Iraq by a far inferior force of Isis fighters, it is still seeing bases overrun because it fails to supply them with ammunition, food and water. The selection of a new Prime Minister, Haider al-Abadi, to replace Nouri al-Maliki last month was supposed to introduce a more conciliatory government that would appeal to Iraq’s Sunni minority from which Isis draws its support.

Mr Abadi promised to end the random bombardment of Sunni civilians, but Fallujah has been shelled for six out of seven days, with 28 killed and 117 injured. Reza Aslan takes down Bill Maher’s “facile arguments” on Islam in just 5 minutes. I’ve Never Seen the Israel-Palestine Conflict Illustrated More Profoundly Than This » Educate Inspire Change. A animated short film satirizing and abbreviating the history of divine claims to Palestine. We even have a viewers guide so you can tell who is who ( See below the video) Early Man This generic “cave man” represents the first human settlers in Israel/Canaan/the Levant. Robert Fisk: Lies and Misreporting in the Middle East.