Why is the media ignoring Israel's alliance with al-Qaeda? 2012 Defense Intelligence Agency document: West will facilitate rise of Islamic State “in order to isolate the Syrian regime” – Levant Report. On Monday, May 18, the conservative government watchdog group Judicial Watch published a selection of formerly classified documents obtained from the U.S. 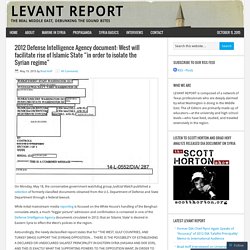 Department of Defense and State Department through a federal lawsuit. While initial mainstream media reporting is focused on the White House’s handling of the Benghazi consulate attack, a much “bigger picture” admission and confirmation is contained in one of the Defense Intelligence Agency documents circulated in 2012: that an ‘Islamic State’ is desired in Eastern Syria to effect the West’s policies in the region.

Astoundingly, the newly declassified report states that for “THE WEST, GULF COUNTRIES, AND TURKEY [WHO] SUPPORT THE [SYRIAN] OPPOSITION… THERE IS THE POSSIBILITY OF ESTABLISHING A DECLARED OR UNDECLARED SALAFIST PRINCIPALITY IN EASTERN SYRIA (HASAKA AND DER ZOR), AND THIS IS EXACTLY WHAT THE SUPPORTING POWERS TO THE OPPOSITION WANT, IN ORDER TO ISOLATE THE SYRIAN REGIME…”. B. 3. 4.D. About these ads Like this: Pentagon report predicted West’s support for Islamist rebels would create ISIS — INSURGE intelligence. Hypocrisy The revelations contradict the official line of Western governments on their policies in Syria, and raise disturbing questions about secret Western support for violent extremists abroad, while using the burgeoning threat of terror to justify excessive mass surveillance and crackdowns on civil liberties at home. 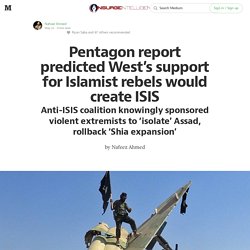 Among the batch of documents obtained by Judicial Watch through a federal lawsuit, released earlier this week, is a US Defense Intelligence Agency (DIA) document then classified as “secret,” dated 12th August 2012. Planned Chaos in the Middle East—and Beyond. In the Same Week, the U.S. and U.K. Hide Their War Crimes by Invoking "National Security" Colonel Ian Henderson was a British official dubbed “the Butcher of Bahrain” because of atrocities he repeatedly committed during the 30 years he served as chief security official of that Middle Eastern country. 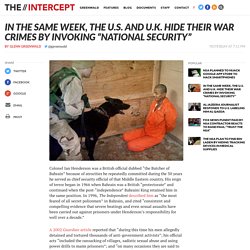 His reign of terror began in 1966 when Bahrain was a British “protectorate” and continued when the post-“independence” Bahraini King retained him in the same position. In 1996, The Independent described him as “the most feared of all secret policemen” in Bahrain, and cited “consistent and compelling evidence that severe beatings and even sexual assaults have been carried out against prisoners under Henderson’s responsibility for well over a decade.” Prior to the massacres and rapes over which he presided in Bahrain, Henderson played a leading role in brutally suppressing the Mau Mau insurgency in another British colony, Kenya. Secret Intel Reports on Syria & Iraq Revealed. 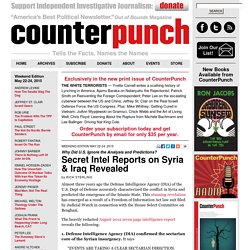 Ignore the Analysis and Predictions? Almost three years ago the Defense Intelligence Agency (DIA) of the U.S. Dept of Defense accurately characterized the conflict in Syria and predicted the emergence of the Islamic State. This stunning revelation has emerged as a result of a Freedom of Information Act law suit filed by Judicial Watch in connection with the House Select Committee on Benghazi.

The heavily redacted August 2012 seven page intelligence report reveals the following: 1. “EVENTS ARE TAKING A CLEAR SECTARIAN DIRECTION. John Pilger On Why The Rise Of Fascism Is The Issue. The recent 70th anniversary of the liberation of Auschwitz was a reminder of the great crime of fascism, whose Nazis iconography is embedded in our consciousness. 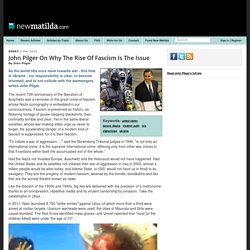 Fascism is preserved as history, as flickering footage of goose-stepping blackshirts, their criminality terrible and clear. Why the Pentagon Papers matter now. The declassification and online release Monday of the full original version of the Pentagon Papers – the 7,000-page top secret Pentagon study of US decision-making in Vietnam 1945-67 – comes 40 years after I gave it to 19 newspapers and to Senator Mike Gravel (minus volumes on negotiations, which I had given only to the Senate foreign relations committee). 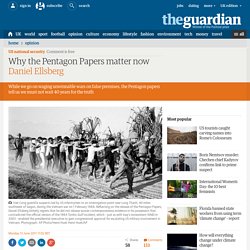 Gravel entered what I had given him in the congressional record and later published nearly all of it with Beacon Press. Together with the newspaper coverage and a government printing office (GPO) edition that was heavily redacted but overlapped the Senator Gravel edition, most of the material has been available to the public and scholars since 1971. (The negotiation volumes were declassified some years ago; the Senate, if not the Pentagon, should have released them no later than the end of the war in 1975.) In other words, today's declassification of the whole study comes 36 to 40 years overdue. Don't make my mistake.

Dogs, water and coffins: an untold story of British torture in Iraq. An aerial view of Baghdad, Iraq after car bombings in 2003. 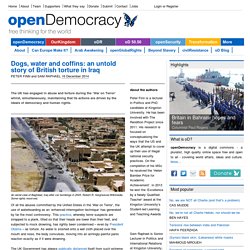 Robert R. Hargreaves/Wikimedia. Some rights reserved,Of all the abuses committed by the United States in the ‘War on Terror’, the use of waterboarding as an ‘enhanced interrogation technique’ has generated by far the most controversy. This practice, whereby terror suspects are strapped to a plank, tilted so that their heads are lower than their feet, and subjected to mock drowning, has rightly been condemned – even by President Obama – as torture. As water is sloshed onto a wet cloth placed over the mouth and nose, the body convulses, moving into an achingly-painful panic reaction exactly as if it were drowning.

The fact that the UK was involved in running a torture centre in the heart of Baghdad is shocking enough. Once at Camp Nama, Rahmatullah was subjected to a horrific regime of abuse, with British personnel apparently playing a lead role. Interrogation sessions were led by men who identified themselves as British. Polls & Surveys : ISLAMiCommentary.

Mexican drug cartels are worse than ISIL. The horrific rampage of the Islamic State of Iraq and the Levant (ISIL) has captured the world’s attention. 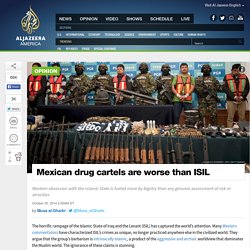 Many Western commentators have characterized ISIL’s crimes as unique, no longer practiced anywhere else in the civilized world. They argue that the group’s barbarism is intrinsically Islamic, a product of the aggressive and archaic worldview that dominates the Muslim world. The ignorance of these claims is stunning. While there other organized groups whose depravity and threat to the United States far surpasses that of ISIL, none have engendered the same kind of collective indignation and hysteria.

This raises a question: Are Americans primarily concerned with ISIL’s atrocities or with the fact that Muslims are committing these crimes? Cartels versus ISIL A recent United Nations report estimated nearly 9,000 civilians have been killed and 17,386 wounded in Iraq in 2014, more than half since ISIL fighters seized large parts on northern Iraq in June. AFP / Getty Images.

Seymour M. Hersh · The Red Line and the Rat Line: Erdoğan and the Syrian rebels · LRB 17 April 2014. In 2011 Barack Obama led an allied military intervention in Libya without consulting the US Congress. 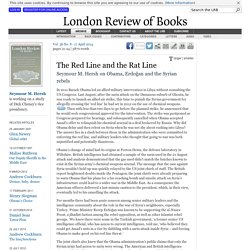 Last August, after the sarin attack on the Damascus suburb of Ghouta, he was ready to launch an allied air strike, this time to punish the Syrian government for allegedly crossing the ‘red line’ he had set in 2012 on the use of chemical weapons.[*]​＊ Then with less than two days to go before the planned strike, he announced that he would seek congressional approval for the intervention. The strike was postponed as Congress prepared for hearings, and subsequently cancelled when Obama accepted Assad’s offer to relinquish his chemical arsenal in a deal brokered by Russia.

Why did Obama delay and then relent on Syria when he was not shy about rushing into Libya? Syrian Jihad Spawned the Islamic State. Sending our forces into another mission impossible - The Drum. Posted Team Australia is being geed up for war in the manner of a desperate coach approaching the final quarter, writes a lively Mungo MacCallum. 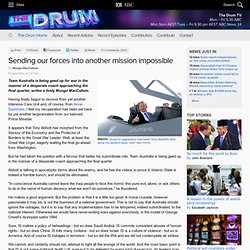 Having finally begun to recover from yet another Intensive Care Unit and, of course, from Anne Summers, I feel my recuperation has been set back by yet another tergiversation from our beloved Prime Minister. Saudi Arabia Will Grant U.S. Request for Anti-ISIS Training Program - NYTimes.com. AMMAN, Jordan — Saudi Arabia has agreed to an American request to provide a base to train moderate Syrian opposition fighters, American officials said on Wednesday.

“We now have the commitment from the Kingdom of Saudi Arabia to be a full partner in this effort — the train-and-equip program — to host that program,” said a senior Obama administration official, who added that discussions were underway to determine the specific site and other details. The Saudi willingness to host a training program comes as Secretary of State John Kerry is preparing to fly to Jidda, Saudi Arabia, on Thursday morning for a high-level strategy session on how to counter the Islamic State in Iraq and Syria. The meeting that is being hosted by the Saudis will also include senior officials from Arab states in the Persian Gulf region, as well as Egypt, Jordan, Lebanon, Turkey and Iraq.