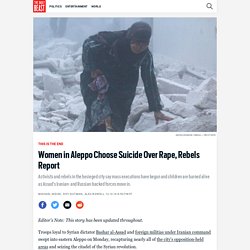 Editor's Note: This story has been updated throughout. Troops loyal to Syrian dictator Bashar al-Assad and foreign militias under Iranian command swept into eastern Aleppo on Monday, recapturing nearly all of the city’s opposition-held areas and seizing the citadel of the Syrian revolution. Saudi Arabia, 9/11, and the secret papers that could ignite a diplomatic war. Twenty-eight secret pages of a report locked away in a room in the Capitol in Washington lie in the centre of a crisis between America and Saudi Arabia which threatens to have severe and widespread repercussions. 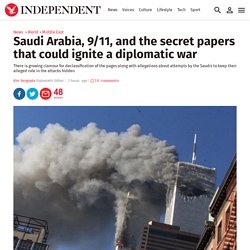 The US Congress is considering legislation which would enable the families of victims of the September 11 attacks to sue Saudi Arabia, presented by the West as its most valuable ally in the Middle East, over alleged links with al-Qaeda terrorists who carried out the attacks on New York and Washington. The issue had cast a long shadow over the recent visit of President Barack Obama to Riyadh, with the Saudis threatening to sell off $750bn of American assets they hold if the bill is passed by Congress.

Former President George W Bush claimed the publication of this part of the report would damage America’s national security by revealing “sources and methods that would make it harder for us to win the War on Terror”. Kuwait has become the first country to make DNA testing mandatory for all residents. In a controversial move, Kuwait has passed a law making it mandatory for all its 1.3 million citizens and 2.9 million foreign residents to have their DNA entered onto a national database. 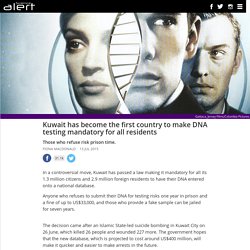 How the growing web of the Syrian conflict became a global problem - Washington Post. EU moves ahead with labeling goods made in Israeli settlements. This Chart Shows the Staggering Human Cost of Staging a World Cup in Qatar. Orthodox Jew Flies In Plane Covered In Huge Plastic Bag, Possibly To Avoid Cemetery Flyover (PHOTO) Palestinian fury as 'Jewish settler' arson attack kills child - BBC News. Palestinian officials say Israel is "fully responsible" for the death of an infant in an arson attack blamed on Jewish settlers in the West Bank. 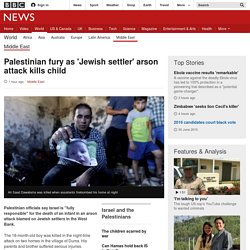 The 18-month-old boy was killed in the night-time attack on two homes in the village of Duma. His parents and brother suffered serious injuries. As Homes in West Bank Settlement Are Demolished, Netanyahu Approves More. “Whoever you see there, you kill”: Israeli soldiers describe horrors of 2014 Gaza war. Breaking the Silence, a left-wing Israeli NGO that works with Israeli soldiers, has released a report based on interviews with more than 60 veterans of the 2014 Gaza conflict, in which Israeli forces invaded the Palestinian territory to fight militant groups such as Hamas. 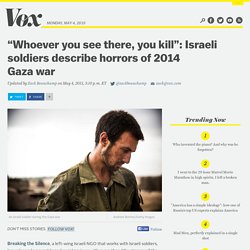 The testimonies are disturbing. According to the group, it found that Israeli policy and conduct in the war "led to massive and unprecedented harm to the population and the civilian infrastructure in the Gaza Strip. " 'ISIS want to impregnate Yazidi women and smash our blond bloodline': Fears grow for the 300 women kidnapped from Sinjar. Jihadist troops bolster forces further south in apparent bid to broaden front with Kurdish peshmerga fightersExpert tells MailOnline: 'IS is coming under pressure and they need to show results to fuel their media machine' Comes after air strikes and Kurdish forces helped to break siege of Mount Sinjar that allowed 45,000 Yazidis to fleeU.S. defence secretary Chuck Hagel said mission to rescue others stranded on mountain was now 'far less likely' UN declares highest level of emergency for the humanitarian crisis as number of displaced Iraqis tops 1.5million By Simon Tomlinson and Tom Mctague, Mail Online Deputy Political Editor Published: 09:57 GMT, 14 August 2014 | Updated: 20:34 GMT, 14 August 2014. 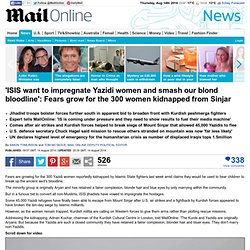 Stoned Pakistani woman's husband: Family demanded money to stay alive. Husband of stoned woman says family demanded 100,000 rupees to stay aliveHe said family earlier approved their marriage, then changed its mindFarzana Parveen, 3 months pregnant, was stoned in a public area of a big cityHer father, brothers and cousins participated in the stoning Islamabad, Pakistan (CNN) -- The husband of a Pakistani woman stoned to death for refusing to participate in an arranged marriage told CNN her family had demanded 100,000 rupees if the couple wanted to stay alive. 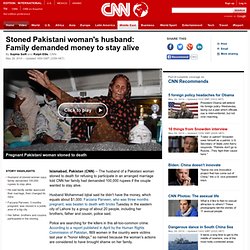 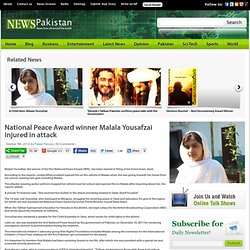 According to the reports, unidentified assailant opened fire on the vehicle of Malala when she was going towards her home from her school, injuring two girls including Malala. Harassment of women may be getting more violent, but activists are fighting back. It is a sordid tale: A 16-year-old girl is groped while walking along the street. 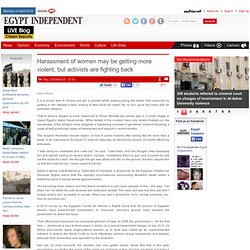 Moroccan girl commits suicide after being forced to marry her rapist. Sonapur, the dark side of Dubai, by Matilde Gattoni. Rollover images for slideshow controls There are three different Dubais, the expats, the Emiratis, headed by Sheikh Mohammed, and then there is the foreign underclass who built the city, and are trapped here. 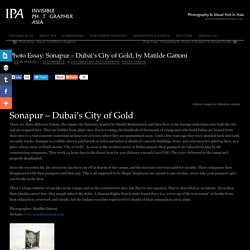 Syria orders thousands into stadium in Latakia crackdown - latimes.com. Reporting from Beirut — Syrian security forces cracking down on opposition strongholds in Latakia herded thousands of people into a stadium and took away their identification cards and cellphones, activists said Monday. Forces loyal to the regime of President Bashar Assad continued hammering opposition strongholds in the country's main port city, especially in the district of Ramleh, which has been pummeled with tank, gunboat and automatic weapons fire after unusually large antigovernment demonstrations broke out there Friday.

Security forces began ordering residents of the area, which includes a refugee camp housing more than 10,000 Palestinians, to go to a soccer stadium ahead of what they described as a huge military operation, activists said. At least five people were confirmed dead. Iranian youths arrested for public water pistol fight in Tehran. The Loud Awakening of Israel's Secular Middle Class - Rafael D. Frankel - International. Pakistan’s Spies Tied to Slaying of a Journalist.