How spiralling rivalry between Turkey and Saudi Arabia could set alight the Middle East  Iran Turns Meddling Into Method. Last Wednesday, the last nail in the coffin that was old Yemen got hammered in, as the US state department announced it is closing its embassy in the country, effectively forfeiting the battle on the Yemen to Iran (for now). 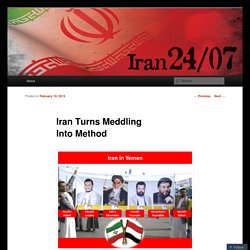 The establishing of a new Houthi ruling council on February 6th, was the culmination de facto of a coup d’état in Yemen. The Houthi are a group of Shiite Zaydi fighters led by Abdul Malik al-Houthi backed by Iran. Iran is King of the Meddle East. Tehran’s stance on Yemen is cynical to the point of schizophrenia. 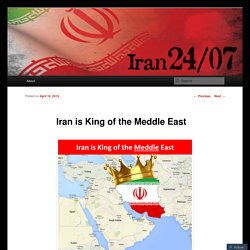 On the one hand, it is obvious to all that it is meddling in Yemenite politics by supporting the Shiite Houthi rebels to exchange the current Saudi-supported Yemeni government with one that is more sympathetic to Iran and to the Islamic revolution. Proxy War in Yemen Ignites Regional Power Play. The situation in Yemen is spiraling out of control and is rapidly turning into the center of a Proxy war with ever-growing conflicts of interests – Yemen was upgraded from a local war zone of government and rebels to a regional war with global consequences. 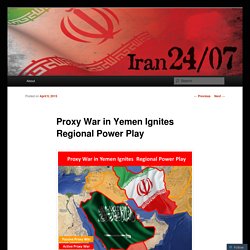 Tehran Meddles in Yemen Back in 2007, the Yemenite government accused Iran of “meddling in its internal affairs“. By 2012, Iran, through its Qods forces, supported Shiite Houthi rebels with arms shipments, Hezbollah militia and “military advisors”. A power play between Iran and Yemen’s historical patron, Saudi Arabia began to unravel. Within three years, Yemen’s president fled from his country, finding refuge in Saudi Arabia while Sanna became another satellite of Tehran following Beirut, Damascus (through supporting Assad) and Baghdad (with the US’s blessing for fighting ISIS). …except for Saudi Arabia… Khamenei’s Crescent of Control. Although Tehran is still isolated from the West due to sanctions over it dubious nuclear aspirations, its regional sphere of control is growing in leaps and bounds. 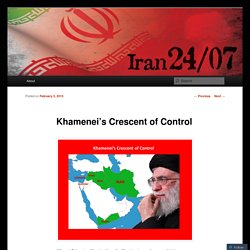 At its epicenter is a crescent of military and political control that ranges from Gaza to Lebanon, Syria, Iraq and now Yemen. Palestine-Iran Relations with Iran took off when the PLO supported the 1979 Islamic revolution in Iran but received a boost during the second Intifada in 2000 when Arafat released Hamas and Islamic Jihadist prisoners who identified with Iran. Despite calls from PLO/Fatah leaders to Tehran to stop meddling in internal Palestinian politics, Iran’s influence grew stronger as Hamas’s power grew within Palestinian politics and once Hamas won the elections in 2006, Tehran became Palestine’s main sponsor.

That sponsorship isn’t only financial since Tehran supplies Hamas with military support and knowledge. Lebanon-Iran Syria-Iran. Iran-Saudi Relationship Back to “Normal” Again. For a few weeks, it seemed that the terror of ISIS had brought a thaw in the strained relationship between Riyadh and Tehran: Foreign ministers met and promises to strengthen relationships were exchanged. 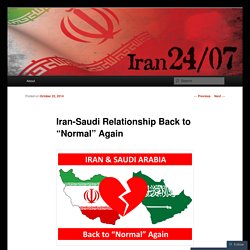 This short spring was finally cut off when the Saudi FM, Prince Saud al-Faisal, icily stated that Iran is “part of the problem” of terrorism and extremism and that Iran should withdraw its troops from Syria (as well as Iraq and Yemen) in order to become “part of the solution”. Was Israel behind was Egypt's coup? Turkey's deluded prime minister thinks so.

It was surely only a matter of time before someone blamed Israel for orchestrating the recent chaos in Egypt. 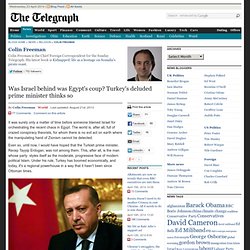 The world is, after all, full of crazed conspiracy theorists, for whom there is no evil act on earth where the manipulating hand of Zionism cannot be detected. Even so, until now, I would have hoped that the Turkish prime minister, Recep Tayyip Erdogan, was not among them. How to create peace in the Middle East – by the man who brought you Iraq. Remember me? 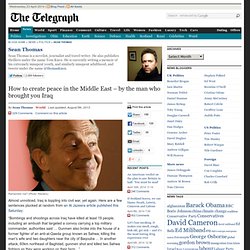 (Photo: Reuters) Almost unnoticed, Iraq is toppling into civil war, yet again. Here are a few sentences plucked at random from an Al Jazeera article published this Saturday: “Bombings and shootings across Iraq have killed at least 19 people, including an ambush that targeted a convoy carrying a top military commander, authorities said … Gunmen also broke into the house of a former fighter of an anti-al-Qaeda group known as Sahwa, killing the man's wife and two daughters near the city of Baqouba … In another attack, 60km northeast of Baghdad, gunmen shot and killed two Sahwa fighters as they were working on their farm…” You get the picture. Why the Arab Spring has failed: Watchdog claims people have no more freedom than under the tyrants they deposed. Report says freedoms gained during Arab Spring risings are diminishingOnly Tunisia has shown an improvement amongst the Middle East-North African countries Published: 13:54 GMT, 18 September 2012 | Updated: 14:32 GMT, 18 September 2012 Freedoms gained during the Arab Spring uprisings are being whittled away and fledgling democracies are now under threat, claims a U.S. watchdog. 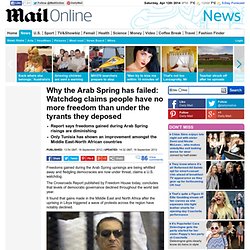 The Crossroads Report published by Freedom House today, concludes that levels of democratic governance declined throughout the world last year. It found that gains made in the Middle East and North Africa after the uprising in Libya triggered a wave of protests across the region have notably declined. Improvements made after Egypt's President Hosni Mubarak, pictured here following his capture, was ousted have not lasted according to a new report Only Tunisia has shown an improvement in its overall governance score amongst the Middle East-North African countries surveyed. As hated leaders are replaced by even more brutally oppressive regimes across the Middle East, the Arab Spring has become a sick joke.

By John Bradley PUBLISHED: 22:52 GMT, 28 June 2012 | UPDATED: 22:29 GMT, 29 June 2012 Hosni Mubarak, Egypt’s deposed dictator, is reportedly still in a coma after being handed a life sentence earlier this month for complicity in the deaths of almost 1,000 protesters during last year’s mass uprising against his tyrannical rule. 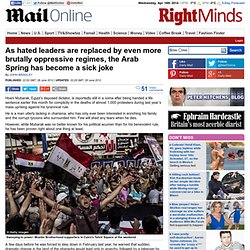 He is a man utterly lacking in charisma, who has only ever been interested in enriching his family and the corrupt tycoons who surrounded him. Few will shed any tears when he dies. However, while Mubarak was no better known for his political acumen than for his benevolent rule, he has been proven right about one thing at least. Sweeping to power: Muslim Brotherhood supporters in Cairo's Tahrir Square at the weekend.