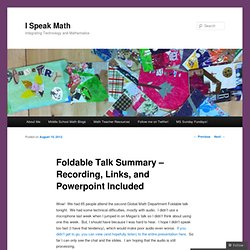 We had 65 people attend the second Global Math Department Foldable talk tonight. We had some technical difficulties, mostly with audio. What’s the Question? « Learning to Fold. Posted by Ashli in Lesson Disclosure. 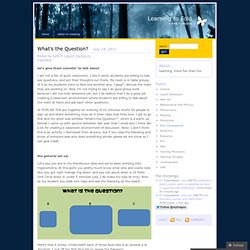 Trackback let’s give them sometin’ to talk about I am not a fan of quiet classrooms. I like it when students are willing to talk, ask questions, and put their thoughts out there. My Virtual Filing Cabinet « mathemagical molly. Math Teachers at Play 52. [Photo by bumeister1 via flickr.] 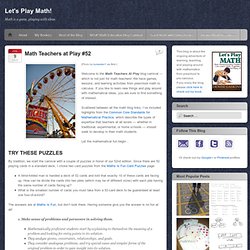 Welcome to the Math Teachers At Play blog carnival — which is not just for math teachers! We have games, lessons, and learning activities from preschool math to calculus. If you like to learn new things and play around with mathematical ideas, you are sure to find something of interest. Scattered between all the math blog links, I’ve included highlights from the Common Core Standards for Mathematical Practice, which describe the types of expertise that teachers at all levels — whether in traditional, experimental, or home schools — should seek to develop in their math students.

Let the mathematical fun begin… By tradition, we start the carnival with a couple of puzzles in honor of our 52nd edition. A blind-folded man is handed a deck of 52 cards and told that exactly 10 of these cards are facing up. The answers are at Maths Is Fun, but don’t look there. Nine useful lists for educators. CEM Tweeters provide some of ed-tech’s best resource lists on getting connected and digital literacies By Meris Stansbury, Associate Editor Read more by Meris Stansbury August 17th, 2012 EducationWorld has a list of five must-follow users to help you get in the pinning groove. 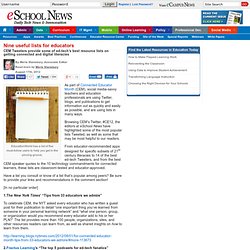 As part of Connected Educator Month (CEM), social media-savvy teachers and education professionals are using Twitter, blogs, and publications to get information out as quickly and easily as possible, and are using lists in many ways. Browsing CEM’s Twitter, #CE12, the editors at eSchool News have highlighted some of the most popular lists Tweeted, as well as some that may be most helpful to our readers. From educator-recommended apps designed for specific subsets of 21st century literacies to 14 of the best ed-tech Tweeters, and from the best CEM speaker quotes to the 10 technology commandments for connected learners, these lists are classroom-tested and educator-approved. 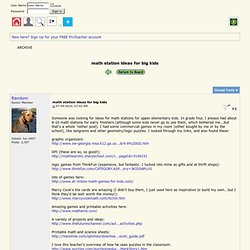 In grade four, I always had about 8-10 math stations for early finishers (although some kids never go to use them, which bothered me...but that's a whole 'nother post). I had some commercial games in my room (either bought by me or by the school), like tangrams and other geometry/logic puzzles. I looked through my links, and also found these: graphic organizers: DPI (these are so, so good!) Logic games from ThinkFun (expensive, but fantastic. Lots of games here: Cool Math Games. By Michael Hartley This page has links to the coolest math games and other resources on this site! 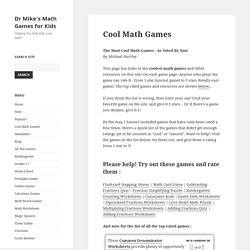 On each game page, anyone who plays the game can rate it - from 1 star (uncool game) to 5 stars (totally cool game). The top rated games and resources are shown below... If you think the list is wrong, then have your say! Find your favorite game on the site, and give it 5 stars... By the way, I haven't included games that have only been rated a few times. Please help! Math 6-8 Resources (2003 SCS) - Mathematics. March 2012. Middle school math. The No Homework Binder: How to Document the Excuses! May Ahhhh homework... the dreaded word that makes kids groan... not to mention teachers when we have to deal with the million excuses as to why the homework didn't get done the next day.

Playing Games. Read "The Celebrated Jumping Frog" to the students. 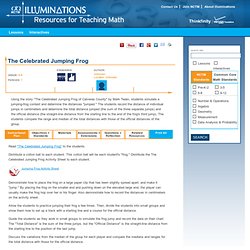 Distribute a cotton ball to each student. This cotton ball will be each student's "frog. " Distribute the The Celebrated Jumping Frog Activity Sheet to each student. Demonstrate how to place the frog on a large paper clip that has been slightly spread apart, and make it "jump. " By placing the frog on the smaller end and pushing down on the elevated large end, the player can usually make the frog hop over her or his finger. Allow the students to practice jumping their frog a few times. Guide the students as they work in small groups to simulate the frog jump and record the data on their chart. Discuss the variations from the median of the group for each player and compare the medians and ranges for the total distance with those for the official distance. 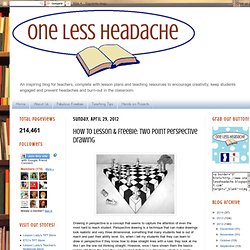 Perspective drawing is a technique that can make drawings look realistic and very three dimensional, something that many students feel is out of reach and past their ability level. So, when I tell my students that they can learn to draw in perspective if they know how to draw straight lines with a ruler, they look at me like I am the one not thinking straight. However, once I have shown them the basics and taught them the rules they are amazed at their own drawings, which is a great delight to me. Perspective drawing is not only something for art class, however. It's a technique you can incorporate into other subject areas as well, such as history and math.

Historically perspective drawing became popular during the Renaissance when many artists such as Raphael and Leonardo da Vinci used this technique in their drawings and paintings. Math is also used in perspective drawing. Videos, Common Core Resources And Lesson Plans For Teachers: Teaching Channel. Getting started with Planboard: Step One — Planboard. Today's Lesson Plans. Classroom Video Tools. Monday, July 15, 2013 Many teachers are frightened by the Common Core State Standards, which purportedly ask for much greater depth of understanding of content. 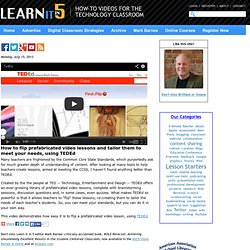 After looking at many tools to help teachers create lessons, aimed at meeting the CCSS, I haven't found anything better than TEDEd. Created by the the people at TED -- Technology, Entertainment and Design -- TEDEd offers an ever-growing library of prefabricated video lessons, complete with brainstorming sessions, discussion questions and, in some cases, even quizzes.

What makes TEDEd so powerful is that it allows teachers to "flip" these lessons, re-creating them to tailor the needs of each teacher's students. Math Card Tricks. Online Math Learning Interactive Area - Worksheets.