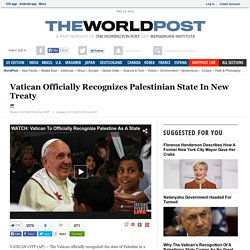 The treaty, which concerns the activities of the Catholic Church in Palestinian territory, makes clear that the Holy See has switched its diplomatic recognition from the Palestine Liberation Organization to the state of Palestine. The Vatican had welcomed the decision by the U.N. General Assembly in 2012 to recognize a Palestinian state. But the treaty is the first legal document negotiated between the Holy See and the Palestinian state and constitutes official diplomatic recognition. The Inside Story of the Saudi Snub. Did the Saudi king slight Obama by not coming to Camp David this week? 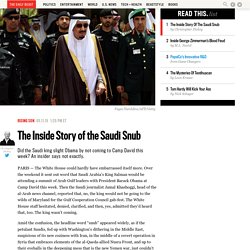 An insider says not exactly. PARIS — The White House could hardly have embarrassed itself more. Over the weekend it sent out word that Saudi Arabia’s King Salman would be attending a summit of Arab Gulf leaders with President Barack Obama at Camp David this week. Then the Saudi journalist Jamal Khashoggi, head of the al-Arab news channel, reported that, no, the king would not be going to the wilds of Maryland for the Gulf Cooperation Council gab-fest.

The White House staff hesitated, denied, clarified, and then, yes, admitted they’d heard that, too. And there may be something to that. “I don’t go with some of my fellow Saudis, who are saying the king is sending a message to Obama or this is a snub to Obama,” Khashoggi told me when I got him on the phone. A Field Guide to the Islamic State (ISIS/ISOL)  "Convert, vow absolute allegiance, beg for mercy, atone, or face certain death! 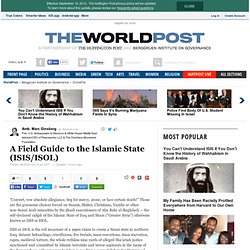 " Those are the gruesome choices forced on Sunnis, Shiites, Christians, Yazidis or other non-Sunni Arab minorities by the jihadi executioners of Abu Bakr al-Baghdadi -- the self-declared caliph of the Islamic State of Iraq and Sham ("Greater Syria") otherwise known as ISIS or ISOL. ISIS or ISOL is the evil incarnate of a 1990s vision to create a Sunni state in northern Iraq. Satanic beheadings, crucifixions, live burials, mass executions, mass starvation, rapes, medieval torture, the whole ruthless nine yards of alleged Sha'ariah justice sanctioned and committed by Islamic terrorists and terror-aspirants in the name of the Koran whose only exposure to Islam is reading a copy of "Islam for Dummies.

" As the gross inhumanity escalates, the Islamic State's terrorist death cult is doing more damage to the name of Islam than most Muslims care to admit. What, in Allah's name, is going on? Al-Baghdadi -- Caliph of ISIS. To Beat ISIS, the Arab World Must Promote Political and Religious Reforms. Cute labels saying products haven't been genetically modified are designed to profit off of fear, not protect you with science. 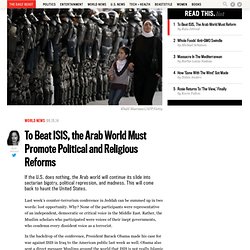 Writing about science-and-society controversies can be a bit like running laps on a track, or watching Teletubbies, or listening to a fugue. The same things keep happening again and again. Take this recent experience of déjà vu: Back in the day (i.e. the mid-aughts), creationists went through a phase of putting labels on textbooks. The labels were often accurate, technically speaking.

They explained that evolution was a theory, and that it was controversial—both true things. Anyway, as for the déjà vu: A few months back, I was spending an afternoon in the aisles of a Whole Foods Market, preparing for an article about pseudoscience in the organic grocery store, when I started to notice, on food packaging in every aisle, innocuous little labels: “Non-GMO Project Verified.”

Still, those cute butterflies aren’t all that different from the textbook labels. How Bush opened the door for ISIS. In June, tens of thousands of Iraqi Security Forces in Nineveh province north of Baghdad collapsed in the face of attacks from the militants of the Islamic State (IS or ISIS), abandoning four major cities to that extremist movement. 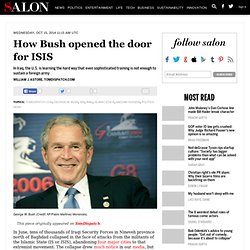 The collapse drew much notice in our media, but not much in the way of sustained analysis of the American role in it. To put it bluntly, when confronting IS and its band of lightly armed irregulars, a reputedly professional military, American-trained and -armed, discarded its weapons and equipment, cast its uniforms aside, and melted back into the populace. What this behavior couldn’t have made clearer was that U.S. efforts to create a new Iraqi army, much-touted and funded to the tune of $25 billion over the 10 years of the American occupation ($60 billion if you include other reconstruction costs), had failed miserably. Instead, Bremer and his team vowed to create a new Iraqi military from scratch. What went wrong? 1. 3. “‘Corruption! 4. What Next?