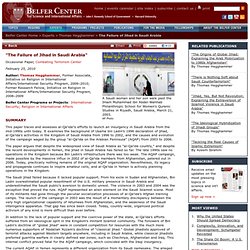 Jadaliyya. The War of Ideas in the Middle East. Front Page. Iran and al Qaeda’s Shadowy Relationship Could Firm Up This Spring. He's that guy you know from, well, everything. Chris Messina on 'Mindy' fanatics, his directorial debut, and when he dropped out of college and quit acting to work on a lobster boat. Before you ask, yes, you do know the guy pictured above from…somewhere. Chris Messina plays dreamy Dr. Danny Castellano on Fox’s Mindy Kaling-helmed comedy The Mindy Project, he's the hardass, numbers-driven network president Reese Lansing in The Newsroom, and he just made his directorial debut with Alex of Venice, a heartbreaking indie drama which premiered at the Tribeca Film Festival. He’s had roles in two Nora Ephron-penned films (You’ve Got Mail and Julie & Julia), Woody Allen’s Vicky Cristina Barcelona, Ben Affleck’s Argo and guest arcs on Six Feet Under and Damages.

“For the longest time, I was always like a guy that people would think they went to high school with,” Messina says, over a cup of scalding hot green tea at a New York coffee house. “At that point, I didn’t want to be an actor. Somalia's al-Shabab join al-Qaeda. 10 February 2012Last updated at 09:48 Al-Shabab has lost ground in recent months but stages frequent suicide attacks in Mogadishu Islamist militant group al-Shabab, which controls much of Somalia, has released a joint video with al-Qaeda, announcing the two groups have merged. 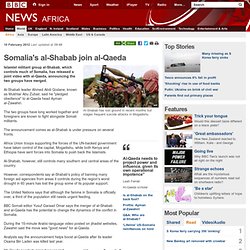 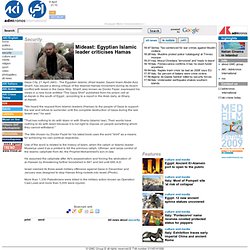 Sharif, also known as Doctor Fazel, expressed his views in a new book entitled "The Gaza Shirt" published from his prison cell at al-Aqrab in the south of Egypt , according to a report in the Arab daily, al-Sharq al-Awsat. "We heard the request from Islamic leaders (Hamas) to the people of Gaza to support the war and refuse to surrender until the complete destruction of Gaza during the last Israeli war," he said. "That has nothing to do with Islam or with Sharia (Islamic law). Their words have nothing to do with Islam because it is not right to impose on people something which they cannot withstand. " The title chosen by Doctor Fazel for his latest book uses the word "shirt" as a means for achieving his own political objectives.

The Future of the Marjayia. How will the leadership of the Shi’ite community evolve in the 21st Century? 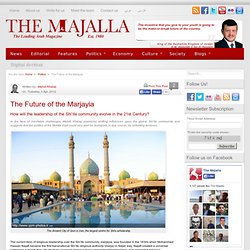 In the face of inevitable challenges, Mehdi Khalaji examines shifting influences upon the global Shi’ite community and suggests that the politics of the Middle East could very well be reshaped, in due course, by unfolding tensions. The Ancient City of Qom in Iran, the largest centre for Shi'a scholarship The current form of religious leadership over the Shi’ite community, marjayia, was founded in the 1830s when Mohammed Hassan Najafi became the first transnational Shi’ite religious authority (marja) in Najaf, Iraq. Najafi created a universal patronage network through which he received religious taxes and endowment incomes, and appointed religious representatives from Shi’ite cities in Iraq to India. Don’t Fear a Nuclear Arms Race in the Middle East - By Steven A. Cook.

On March 21, Haaretz correspondent Ari Shavit wrote a powerful op-ed in the New York Times that began with this stark and stunning claim: "An Iranian atom bomb will force Saudi Arabia, Turkey, and Egypt to acquire their own atom bombs. 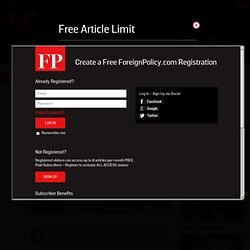 " Indeed, it has become axiomatic among Middle East watchers, nonproliferation experts, Israel's national security establishment, and a wide array of U.S. government officials that Iranian proliferation will lead to a nuclear arms race in the Middle East. President Barack Obama himself, in a speech to the American Israel Public Affairs Committee (AIPAC) last month, said that if Iran went nuclear, it was "almost certain that others in the region would feel compelled to get their own nuclear weapon. " This logic was undoubtedly at work when Pakistan embarked on a nuclear program in 1972 to match India's nuclear development program. But even if the Turks wanted their own bomb, they have almost no capacity to develop nuclear weapons technology. MEMRI - The Middle East Media Research Institute.