Defiant Iranian women post videos of themselves cycling on Facebook after ban. Iran lawmakers pass bill allowing men to marry adopted daughters. Parliamentarians in Iran have passed a bill to protect the rights of children which includes a clause that allows a man to marry his adopted daughter and while she is as young as 13 years. 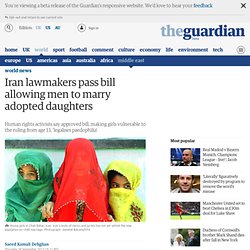 Activists have expressed alarm that the bill, approved by parliament on Sunday, opens the door for the caretaker of a family to marry his or her adopted child if a court rules it is in the interests of the individual child. Iran's Guardian Council, a body of clerics and jurists which vets all parliamentary bills before the constitution and the Islamic law, has yet to issue its verdict on the controversial legislation. To the dismay of rights campaigners, girls in the Islamic republic can marry as young as 13 provided they have the permission of their father. Boys can marry after the age of 15.

In Iran, a girl under the age of 13 can still marry, but needs the permission of a judge. As many as 42,000 children aged between 10 and 14 were married in 2010, according to the Iranian news website Tabnak. Naked female activists call for 'topless revolution' in Tunisia after preacher demands nude protester, 19, be stoned to death because she is an 'epidemic' Amina Tyler, 19, posted naked images of herself on her Facebook pageSeen with 'my body belongs to me' written in Arabic across her chestSalafist preacher wants her 'quarantined' because she is 'contagious' Naked protest group FEMEN demands 'Arab Spring for women's rights'Have declared April 4 a day of 'relentless topless jihad against Islamism'Group issued statement saying: 'Our tits are deadlier than your stones! 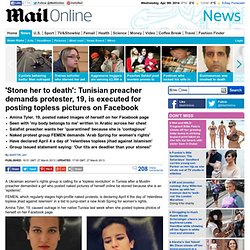 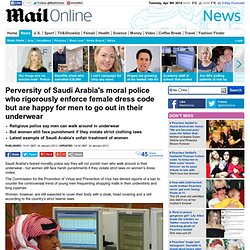 The Commission for the Promotion of Virtue and Prevention of Vice has denied reports of a ban to counter the controversial trend of young men frequenting shopping malls in their undershirts and long pyjamas. Women, however, are still expected to cover their body with a cloak, head covering and a veil according to the country's strict Islamic laws. Saudi Arabian men sent a text message when their wives leave or enter the country: equal rights campaigners criticise the airport system. Saudi women banned from travelling without consent of male 'guardian'Airport system alerts men by sending a text when women leave or enterCampaigners have described the system as 'humiliating' By Mario Ledwith Published: 13:07 GMT, 23 November 2012 | Updated: 13:56 GMT, 23 November 2012 Saudi Arabian women are being monitored by an electronic system at airports that notifies their male 'guardians' when they try to leave the country. 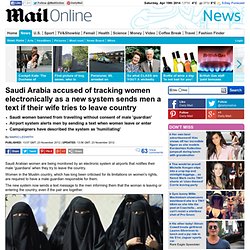 Women in the Muslim country, which has long been criticised for its limitations on women's rights, are required to have a male guardian responsible for them. The new system now sends a text message to the men informing them that the woman is leaving or entering the country, even if the pair are together. Saudi Arabia's women allowed to join country's main advisory body but must be separated from men by a screen - Middle East - World. An internal communications system will allow men and women to debate when female members attend the Shura Council, a consultative body appointed by King Abdullah bin Abdulaziz, for the first time early next year, a Saudi official told Al-Watan newspaper. 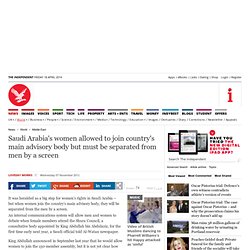 King Abdullah announced in September last year that he would allow women to join the 150-member assembly, but it is not yet clear how many women will be included when the council reconvenes. As the oil-rich kingdom takes a few tentative and grindingly slow steps towards granting women more rights, compromise must be made with powerful hardline religious clerics, many of whom oppose the even the smallest of advances. Tribal customs and adherence to the ultra-conservative Wahhabi sharia law mean that segregation of the sexes is widespread in Saudi Arabia, where women are still not allowed to drive. They must use separate entrances at banks and offices, and a plan to build a city for female workers only has been announced. Woman sentenced to death in Yemen for shooting dead a male relative 'who tried to rape her' Human Rights groups say Raja Hakimi acted in self-defenceSentence raised on appeal from two years in jail to death by hanging By Eddie Wrenn for MailOnline Published: 13:28 GMT, 22 October 2012 | Updated: 08:56 GMT, 24 October 2012. 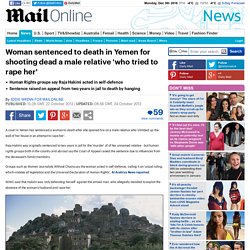 No females allowed! IKEA under fire for deleting pictures of women from its Saudi catalogue. By Emma Clark Published: 16:12 GMT, 1 October 2012 | Updated: 16:13 GMT, 2 October 2012 Ikea has apologised for airbrushing women out of the Saudi version of its furniture magazine - which was previously identical across the world. 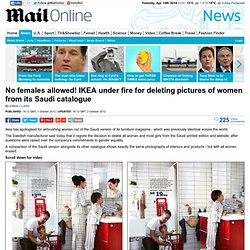 The Swedish manufacturer said today that it regrets the decision to delete all woman and most girls from the Saudi printed edition and website, after questions were raised over the company's commitments to gender equality. Sexual harassment in Egypt reaching "epidemic" proportions. Saudi Arabia: Women-only city planned to allow more and more females to pursue a career. By David Baker Published: 18:52 GMT, 11 August 2012 | Updated: 01:58 GMT, 13 August 2012 Saudi Arabia is planning to build a new city exclusively for women as it bids to combine strict Sharia law and career minded females, pursuing work. 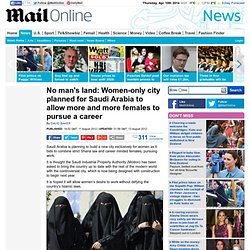 Rich Arab tourists buying under-age 'brides' in Egypt just for the summer for £3,200. Poor families paid a 'dowry for the temporary marriagesYoung victims suffer sexual slavery and forced to be servants By Daily Mail Reporter Published: 09:10 GMT, 15 July 2012 | Updated: 09:46 GMT, 15 July 2012 Wealthy tourists from the Persian Gulf are paying to marry under-age Egyptian girls just for the summer, according to a report. These temporary marriages are not legally binding and end when the men return to their homes in Saudi Arabia, the United Arab Emirates and Kuwait. Politics at the Tip of the Clitoris: Why, in Fact, Do They Hate Us? What baffles me most about Mona Eltahawy’s Foreign Policy article is that it does not accomplish the task it sets out for itself; it does not, in fact, answer its foundational question: Why do they hate us? 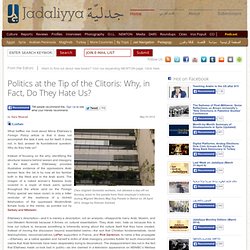 Instead of focusing on the why, identifying the structural reasons behind sexism and misogyny in the Arab world, Eltahaway provides illustrative evidence of the oppressions Arab women face; the list is by now all too familiar both in the West and in the Arab world. The images of a naked woman’s flawless body covered in a niqab of black paint, spread throughout the article (and on the Foreign Policy special sex issue cover) is only a bitter reminder of the resilience of a clichéd fetishization of the oppressed Muslim/Arab female body in the media, as pointed out by Seikaly and Mikdashi.

To be sure, the answers to such a complex question cannot be provided in one article. However, Eltahawy’s intervention could have benefited from much needed constructive deconstruction. . [4] Ibid. Iranian Women and Economic Sanctions by Mina Khanlarzadeh. Iranian and Muslim women have become the subject of great interest for Euro-American media and U.S. politicians in recent years. 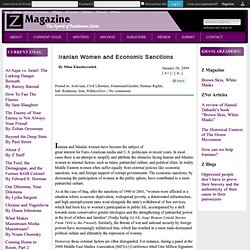 In most cases there is an attempt to simplify and attribute the obstacles facing Iranian and Muslim women to internal factors, such as Islam, patriarchal culture, and political elites. In reality Middle Eastern women often suffer equally from external policies like economic sanctions, war, and foreign support of corrupt governments. The economic sanctions, by decreasing the participation of women in the public sphere, have contributed to a more patriarchal culture. However, these external factors are often disregarded. Contrary to this claim, I believe the threat of war and the economic sanctions are prominent obstacles that Iranian women must overcome in order to change discriminatory laws in both public and private spheres.

The anti-imperialism discourse goes beyond women’s dress and includes many other symbols and concepts considered "western. "