Digital marketing and media analysis on Middle East, Africa. The following excerpt is from eMarketer's report: "The Global Media Intelligence Report: Middle East & Africa, 2013" eMarketer estimates the number of internet users in the Middle East & Africa rose by almost 20% in 2012 and will see similar advances this year. 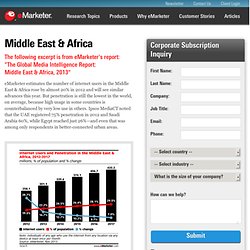 But penetration is still the lowest in the world, on average, because high usage in some countries is counterbalanced by very low use in others. Ipsos MediaCT noted that the UAE registered 75% penetration in 2012 and Saudi Arabia 60%, while Egypt reached just 26%—and even that was among only respondents in better-connected urban areas. Rising mobile penetration is boosting web access, though. When the Dubai School of Government surveyed people across the region in March 2013, more than 60% said they used a laptop or desktop to access the internet.

With digital advertising, too, Middle East & Africa is beginning to make up for low spending levels in the past. eMarketer clients have access to all the data and insights we publish. Web Users in the Middle East Emphasize Social Networking. In terms of time spent online, the broad Middle East and Africa region lags behind the worldwide average. 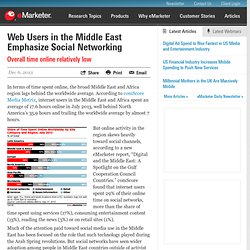 According to comScore Media Metrix, internet users in the Middle East and Africa spent an average of 17.6 hours online in July 2013, well behind North America’s 35.9 hours and trailing the worldwide average by almost 7 hours. But online activity in the region skews heavily toward social channels, according to a new eMarketer report, “Digital and the Middle East: A Spotlight on the Gulf Cooperation Council Countries.” comScore found that internet users spent 29% of their online time on social networks, more than the share of time spent using services (17%), consuming entertainment content (13%), reading the news (3%) or on retail sites (1%). Social@Ogilvy. As we step into a brave new year it is time to reflect and review on the previous year and what key learnings we can bring to our clients and colleagues moving into 2014. Over the festive season I have had a chance to take stock and examine my experience to date working in this region and what that has taught me about consumer and corporate social media usage.

I have created a presentation below to accompany this Tumblr, your thoughts, opinions and comments are welcome as I am keen to hear different opinions from other professionals working in Social Media. Google Plus comes of age As far as the big players are concerned, I think one to watch in 2014 will be Google Plus. Google+ is quickly gaining steam, and in fact, now has the second highest number of monthly users globally (343 million). With Google using the platform to collect personal information (think demographics, location, etc.), Google+ should no longer be thought of as ‘just’ another social network. 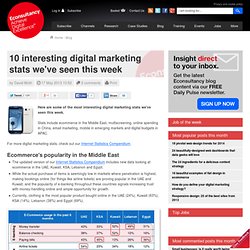 Stats include ecommerce in the Middle East, multiscreening, online spending in China, email marketing, mobile in emerging markets and digital budgets in APAC. For more digital marketing stats, check out our Internet Statistics Compendium. Ecommerce's popularity in the Middle East The updated version of our Internet Statistics Compendium includes new data looking at ecommerce in the UAE, Kuwait, KSA, Lebanon and Egypt.While the actual purchase of items is seemingly low in markets where penetration is highest, making bookings online (for things like airline tickets) are proving popular in the UAE and Kuwait, and the popularity of e-banking throughout these countries signals increasing trust with money-handling online and ample opportunity for growth.Currently, clothing is the most popular product bought online in the UAE (24%), Kuwait (63%), KSA (14%), Lebanon (38%) and Egypt (69%). Smartphone Usage to Nearly Double in the Middle East and Africa. 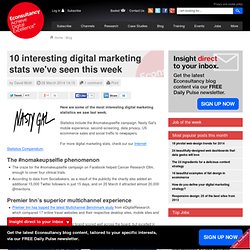 Statistics include the #nomakeupselfie campaign, Nasty Gal's mobile experience, second-screening, data privacy, US ecommerce sales and social traffic to newpapers. For more digital marketing stats, check out our Internet Statistics Compendium. The #nomakeupselfie phenomenon The craze for the #nomakeupselfie campaign on Facebook helped Cancer Research £8m, enough to cover four clinical trials.According to data from Socialbakers, as a result of the publicity the charity also added an additional 15,000 Twitter followers in just 15 days, and on 20 March it attracted almost 20,000 @mentions. Premier Inn’s superior multichannel experience Nasty Gal is top dog for mobile Apple dominates global mobile web browsing 16% of TV audience is second-screening According to the latest study from the Council for Research Excellence (CRE), 16% of a television audience is using social media at the same time. 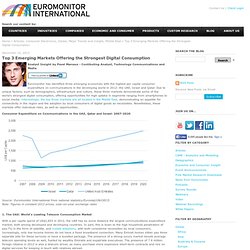 Due to unique factors, such as demographics, infrastructure and culture, these three markets demonstrate some of the world’s strongest digital consumption, offering opportunities for high uptake in segments ranging from smartphones to social media.