The Number One Mistake People I Interview Are Making These Days 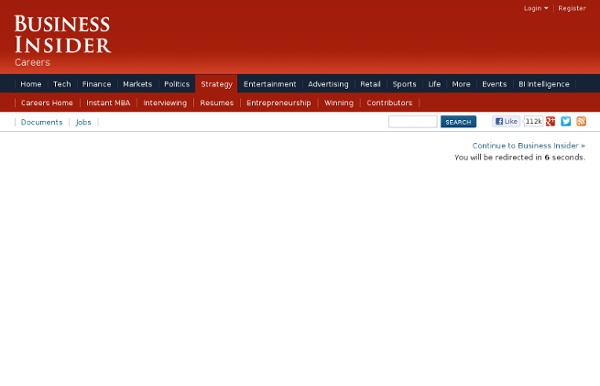 5 Things I Look for in a Great Job Interview In my career I have reviewed thousands of resumes and conducted hundreds of employment interviews for both The Trademark Company and other businesses for which I have worked. In doing so, I got to see the good, the bad, and the downright ugly in terms of resumes, interviewing skills, and the like. For other CEOs looking to hire, here's what I think makes a great candidate stand out from the good ones. 1. How many times have you heard this one, right? There’s a great story at the end of the movie Coming to America with Eddie Murphy. A man goes into a restaurant. At this point you may be asking yourself, “So what does this have to do with identifying a great candidate?” Not less than two months ago I received a wonderful e-mail from an applicant seeking to work for The Trademark Company. The applicant had failed to attach a resume. Some CEOs may have overlooked this and just asked for the resume. 2. My contracts professor in law school told this one to the class one day. 3. 4. 5.

80% Of People Aren't Using LinkedIn The Way They're Supposed To Recruiting: 8 Qualities Your Best Employees Should Have Great employees are reliable, dependable, proactive, diligent, great leaders and great followers... they possess a wide range of easily-defined—but hard to find—qualities. A few hit the next level. Some employees are remarkable, possessing qualities that may not appear on performance appraisals but nonetheless make a major impact on performance. Here are eight qualities of remarkable employees: 1. When a key customer's project is in jeopardy, remarkable employees know without being told there's a problem and jump in without being asked—even if it's not their job. 2. People who aren't afraid to be different naturally stretch boundaries and challenge the status quo, and they often come up with the best ideas. 3. Remarkable employees know when to play and when to be serious; when to be irreverent and when to conform; and when to challenge and when to back off. 4. 5. 6. An employee once asked me a question about potential layoffs. 7. 8. Great employees follow processes. Forget good to great.

Ace the odd interview questions No matter how odd the question, answer in a way that reflects best on your personality. Hiring managers veer from traditional interview questions to pick up on personality traitscompanies want people who can help the business prosper in a tough economic environmentNo matter the question, what you say should be tied to your qualifications for the position (CareerBuilder.com) -- Turns out that job seekers are not the only ones getting creative in the interview process. A new CareerBuilder survey of hiring managers revealed that they, too, are starting to veer from the traditional interview questions in order to get candidates to offer up even more unique glimpses into their personality. According to the latest Job Openings and Labor Turnover Survey (JOLTS) conducted by the Bureau of Labor Statistics, the number of applicants competing for every job opening in the U.S. is double the historic norm at seven candidates per opening. Q: Do you believe in UFOS? Let's be honest -- everyone has.

Mastering The Uncomfortable Art Of Personal Branding I was recently chatting with an up-and-coming professional speaker about some of the best presenters I've seen on stage. I immediately launched into an unplanned sales pitch for Gary Vaynerchuk, or Gary Vee, as many of us know him online. Within minutes I was citing important milestones in Vaynerchuk's life, such as his pre-school move to the United States from what is now known as Belarus, his experience operating a number of lemonade stands when he was just eight years old, and his college years working in his parents' liquor store. After I walked away from the conversation, I tried desperately to recall when I had seen the best-selling author speak, or more importantly, if I had ever met him in person. While I have chatted with Vaynerchuk a few times over Skype, I slowly realized that I have never been in the same room as him (but have watched quite a few of his keynotes on YouTube). For some, telling your story is an uncomfortable experience. 1. 2. 3.

8 Job Search Tips From the Co-Founder of LinkedIn Early on in The Start-up of You, Reid Hoffman takes on the sacred cow of career advice books, making it clear that the timeworn exhortations of What Color is Your Parachute? won't fly in this economy. "That's the wrong question," Hoffman, the co-founder and chairman of LinkedIn writes (with the help of coauthor Ben Casnocha). "What you should be asking yourself is whether your parachute can keep you aloft in changing conditions." Hence the central conceit of the book. Just as Detroit's dinosaurs fell victim to hubris and an inability to adapt, so will you, dear career seeker, if you don't mimic the nimble startups of Silicon Valley. 1. To answer this question, Hoffman uses the example of Zappos, which focuses on mainstream shoes and clothes. 2. Hoffman makes a sharp distinction between his advice and that of Parachute, which, like many self-help books, believes that uncovering your deepest desires is the key to finding your passion. 3. 4. 5. 6. 7. 8.

The most ridiculous job interview questions As if job interviews weren't stressful enough, hiring managers at some of the largest companies have taken to throwing real curve balls. Here's a sampling of the wackiest questions. By Anne Fisher, contributor FORTUNE -- With about five candidates for every job opening these days, some responsible for hiring decisions have resorted to desperate measures in their efforts to narrow the field. Glassdoor.com culled through tens of thousands of queries reported by job seekers who had done their best to come up with answers on the spot, and selected the oddest interview questions of the past 15 months. Luckily for beleaguered candidates, the interviewers seemed in most cases to be more interested in how people responded -- that is, in hearing their thought process, and seeing how well they kept their cool -- than in receiving a "correct" response. "Using a scale of 1 to 10, rate yourself on how weird you are." -- Capital One (COF) "How many balloons would fit in this room?" Also on Fortune.com:

Seven Speaking Tips That Beat "Pretend Your Audience Is Naked& Aggh. Everyone showed up clothed! Once upon a time, I suffered from glossophobia. This affliction touches billions. I conquered it by discovering what makes people smile, nod, and listen carefully, because nothing calms you down faster than an interested audience. This is what I've learned. Children plea for them at night, and adults crave them, too. They want to be respected. This principle also underlies another rule of effective speaking: Dress like your audience, but just a little bit better." {*style:<i>Don't try to impress them. </i>*} If you truly want to help your listeners--by informing or motivating them, or improving their lives--they will care and listen. This recalls a favorite tip: We mistrust people who won't look us in the eyes--even if our eyes are among over 200 sets in a room. If you look each person in the eye for a few seconds, you make each person feel important--a feeling that every person craves. For this reason, minimize visual aids. . .