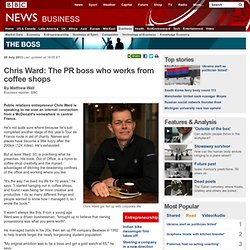 Secret Google lab 'rewards staff for failure' 24 January 2014Last updated at 17:56 ET By David Grossman Technology editor, BBC Newsnight Astro Teller explains the Google X approach to failure In a few unremarkable looking, red brick buildings off the main Google campus in Mountain View, California, is Google X, its secret laboratory - but there is no sign to tell you that you've arrived. 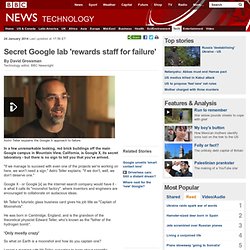 Confidence is King. Achieving Greatness. Can you change your decision after officially accepting a job offer. Tech Talent: Map of the UK's digital clusters. Image copyright Thinkstock There are more than 1.5 million "digital tech" jobs in the UK, and the sector is said to be growing faster in terms of turnover and productivity than the wider economy. 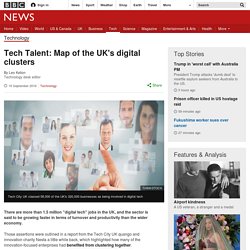 Those assertions were outlined in a report from the Tech City UK quango and innovation charity Nesta a little while back, which highlighted how many of the innovation-focused enterprises had benefited from clustering together. To mark the BBC's Tech Talent week, we've revisited the study and focused on the areas where there are at least 7,000 digital tech jobs. What's striking is that at first glance, the numbers seem to confirm that London's cluster is well ahead of any other - and indeed the capital hosts several of tech's better-known names. But once you combine the data with official population statistics, another picture emerges. Based on a calculation of how many tech jobs there are per head of the local population, Cambridge, Reading and Bracknell, and Oxford and Abingdon take the lead. Leeds. Data Crunchers Now the Cool Kids on Campus. The five things Google really wants in new hires.

“There are five hiring attributes we have across the company,” says Google’s Laszlo Bock. 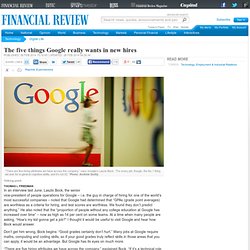 “For every job, though, the No. 1 thing we look for is general cognitive ability, and it’s not IQ.” FAQ for academic social scientists interested in tech. I’ve talked to a lot of grad students (and a few faculty) about transitioning from academia/research to a job in tech. 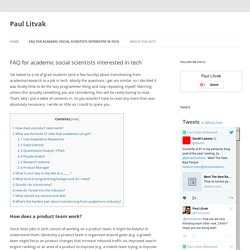 Mostly the questions I get are similar, so I decided it was finally time to do the lazy programmer thing and stop repeating myself. Warning: unless this actually something you are considering, this will be really boring to read. Not Everything That Counts Can Be Counted. This column is written for statisticians with master’s degrees and highlights areas of employment that will benefit statisticians at the master’s level. 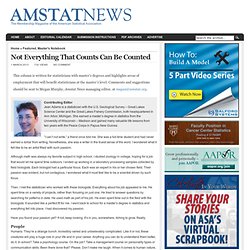 Comments and suggestions should be sent to Megan Murphy, Amstat News managing editor, at megan@amstat.org. Contributing Editor Jean Adams is a statistician with the U.S. Geological Survey – Great Lakes Science Center and the Great Lakes Fishery Commission, both headquartered in Ann Arbor, Michigan. She earned a master’s degree in statistics from the University of Wisconsin – Madison and gained many valuable life lessons from two years with the Peace Corps in Papua New Guinea. Powerful Action Verbs To Kick Your Resume Up A Notch. Did you know you should have strong action verbs strategically placed throughout your resume? 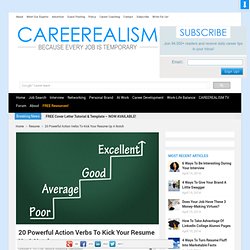 Well, now you do! Most importantly, you want them at the beginning of the majority of your bullet points and accomplishment-based statements. 10 Things Really Amazing Employees Do. As a longtime employer of dozens, I was always grateful to have good employees. 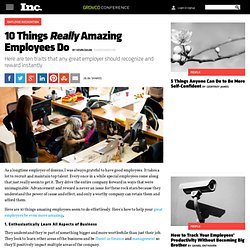 It takes a lot to recruit and maintain top talent. 10 Interview Questions You Should Never Ask (and 5 You Always Should) This article is from our friends at LearnVest, a leading site for women and their money. 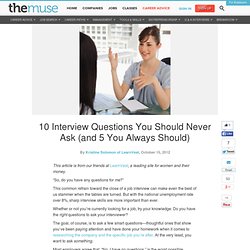 “So, do you have any questions for me?” This common refrain toward the close of a job interview can make even the best of us stammer when the tables are turned. But with the national unemployment rate over 8%, sharp interview skills are more important than ever. Whether or not you’re currently looking for a job, try your knowledge: Do you have the right questions to ask your interviewer?

The goal, of course, is to ask a few smart questions—thoughtful ones that show you’ve been paying attention and have done your homework when it comes to researching the company and the specific job you’re after. Most employers agree that, “No, I have no questions,” is the worst possible response. 5 Things You Should Be Doing If You're Unemployed.

You know the saying, “Applying to jobs is a full-time job”? 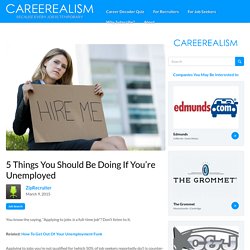 Don’t listen to it. Related: How To Get Out Of Your Unemployment Funk. An Introvert's Guide to Networking - Lisa Petrilli. By Lisa Petrilli | 9:15 AM January 25, 2012 I learned the critical importance of networking, and discovered my natural aversion to it, early in my career. I was a new college graduate working in the strategic planning division of a $10 billion company, and our business unit had been invited to a retirement party for one of the top executives. The gentleman retiring was someone I’d looked up to during my brief tenure, and I wanted him to know he’d made an impact on me. While I wanted to attend the party, as an introvert I usually avoided these types of events because they made me uncomfortable. 5 Soft Skills To Showcase In Interviews. If you are extremely qualified, have terrific application materials, a targeted resume and you're interviewing for jobs, but always coming up with a silver medal, it's possible that you're bumping up against an elusive category: likability.

Also known in the industry as "cultural fit," likability is a reason many candidates don't make the final cut—the interviewers either didn't like them or didn't believe they would mesh well with current employees. One of the reasons that most employers don't provide specific feedback to a second-place candidate is because it's difficult to explain why someone doesn't fit in. Bag your dream job with a little help from an avatar. How to Close the Interview to Ensure You Get the Job! Interview Questions for Data Scientists. Great data scientists come from such diverse backgrounds that it can be difficult to get a sense of whether someone is up to the job in just a short interview. In addition to the technical questions, I find it useful to have a few questions that draw out the more creative and less discrete elements of a candidate’s personality.

Here are a few of my favorite questions. What was the last thing that you made for fun? This is my favorite question by far — I want to work with the kind of people who don’t turn their brains off when they go home. Resume & Interview Tips For R Programmers. 5 Things I Look for in a Great Job Interview. In my career I have reviewed thousands of resumes and conducted hundreds of employment interviews for both The Trademark Company and other businesses for which I have worked. In doing so, I got to see the good, the bad, and the downright ugly in terms of resumes, interviewing skills, and the like. How To: Communicate In An Interview. The Perfect Job Interview in 8 Simple Steps. The Leadership Debate.

Two killer questions to close the deal on a job offer. 7 Steps to Prepare for an Interview. The Number One Mistake People I Interview Are Making These Days. 6 steps to a better job interview. 9 December 2013Last updated at 19:29 ET By Peter Bowes BBC News, Los Angeles. Top 10 tips for a successful Telephone Interview. By Jez Styles, AdMore Recruitment- Specialists in Retail and Hospitality Search. Think you know how to search for a job? Think again. Suzanne Ball, careers advisor at the University of Hertfordshire (Image: Jonathan Banks/Rex Features) The best place to look for jobs is the internet, right?

Well yes, but it is not as straightforward as it sounds. 5 tips to using an agency and land the perfect job. Beating the recruitment machines. 8 November 2012Last updated at 19:02 ET By Michael Millar Business reporter, BBC News. The secret life of the perfect statistical analyst for you. Perfecting your CV: 5 things to think about. Suzanne Ball, careers advisor at the University of Hertfordshire (Image: Image Source/Getty) "Summarise your education, skills and experience in two pages".

Botox your CV and online profile. 10 Overused Phrases & Keywords to Avoid Putting On Your Resume. 6 Resume Red Flags for the Modern Age. Why Relationships Matter: I-to-the-We. 8 Habits of Remarkably Successful People. Recruiting: 8 Qualities Your Best Employees Should Have. How to motivate new starters from day one. Can You Live Without a Data Scientist? - Tom Davenport.

The publication imperative. Junior scientists - you don't have to publish in open access journals to be an open scientist. Build Your Professional Network with Facebook. Why 50 is the magic number for job-hunting.