It's only October, so what's with all these bushfires? New research explains it. Analysis By Chris Lucas and Sarah Harris Posted 10 Oct 2019, 3:08amThu 10 Oct 2019, 3:08am Summer might be more than six weeks away, but out of control bushfires have already torn across parts of eastern Australia in recent days, destroying homes and threatening lives. 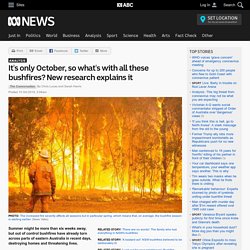 As of Wednesday afternoon, up to 30 homes were feared lost or badly damaged by bushfires burning in northern New South Wales. About 40 fires burned across the state. This did not come as a surprise to meteorologists and fire agencies. Record breaking heat and windy conditions were forecast for parts of NSW and Queensland this week, prompting severe fire danger ratings. We're often told the Australian bushfire season is starting earlier. Scott Morrison holds a lump of coal in Parliament. As Australia Burns Let's Remember When ScoMo Brought A Lump Of Coal To Parliament. The bushfire crisis has given the Government a political 'out' to its climate change problem. Opinion By Frank Jotzo. 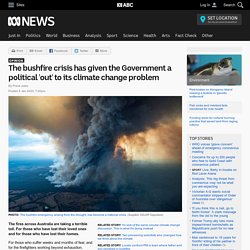 How Climate Change Has Made the Australian Bushfires Worse. What is a BAL ? (Bushfire Attack Level) - Bushfire Prone Planning - BAL Assessments. A Bushfire Attack Level (BAL) is a means of measuring the severity of a building’s potential exposure to ember attack, radiant heat and direct flame contact. 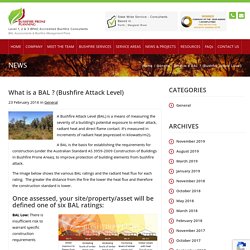 It’s measured in increments of radiant heat (expressed in kilowatts/m2). A BAL is the basis for establishing the requirements for construction (under the Australian Standard AS 3959-2009 Construction of Buildings in Bushfire Prone Areas), to improve protection of building elements from bushfire attack. The image below shows the various BAL ratings and the radiant heat flux for each rating. The greater the distance from the fire the lower the heat flux and therefore the construction standard is lower. BAL Low: There is insufficient risk to warrant specific construction requirementsBAL 12.5: Ember attack. Australians protest PM Scott Morrison's climate policies amid bushfire crisis. New South Wales police told CNN more than 30,000 people attended the climate change protest in Sydney. 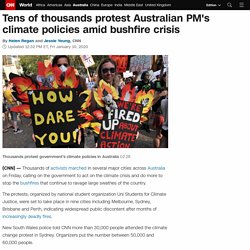 Organizers put the number between 50,000 and 60,000 people. "The bushfires are devastating communities and our government is not doing enough to stop it," Ambrose Hayes, 14, told CNN at a rally in Sydney. Tens Of Thousands Protest Australian PM’s Climate Policies Amid Bushfire Crisis. This video is no longer available Animals badly burnt by Australian wildfires euthanized Hundreds of animals in Australia have been euthanized as fires destroy habitats and cause severe injuries. 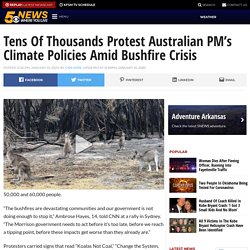 The Mallacoota golf course, a sanctuary for animals fleeing catastrophic bushfires, has been turned into a killing field. CNN's Anna Coren reports. Published at: 6:52 AM, Fri Jan 10 2020 (CNN) — Thousands of activists marched in several major cities across Australia on Friday, calling on the government to act on the climate crisis and do more to stop the bushfires that continue to ravage large swathes of the country.

The protests, organized by national student organization Uni Students for Climate Justice, were set to take place in nine cities including Melbourne, Sydney, Brisbane and Perth, indicating widespread public discontent after months of increasingly deadly fires. New South Wales police told CNN more than 30,000 people attended the climate change protest in Sydney. Volunteer firefighters in Australia warned not to crowdfund for equipment. Rural Fire Service members have been warned about crowdfunding for protective masks “without the appropriate authority” amid growing concern about resourcing levels of the state’s firefighting volunteers. 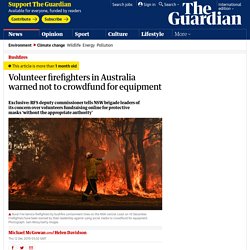 As fire crews battle more than 100 blazes across New South Wales, volunteers have been warned by the organisation’s leadership against using social media to crowdfund for equipment. In an operational memo sent to brigade leaders on Wednesday, RFS deputy commissioner Rob Rogers said the organisation’s leadership was “concerned” that crowdfunding campaigns were being set up “without the appropriate authority”. “NSW RFS firefighters are provided all necessary tools and equipment to undertake their work. This includes fire appliances and associated hoses, nozzles and all personal protection equipment including respiratory protection,” Rogers wrote in the memo. Australia fires: PM Scott Morrison sorry for Hawaii holiday during crisis.

Media playback is unsupported on your device Australian Prime Minister Scott Morrison has apologised for causing "great anxiety" by going on holiday during a mounting wildfire crisis. 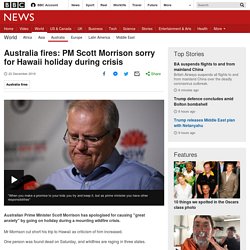 Mr Morrison cut short his trip to Hawaii as criticism of him increased. Australia heatwave: All-time temperature record broken again. Media playback is unsupported on your device A state of emergency has been declared in New South Wales, Australia, amid fears a record-breaking heatwave will exacerbate the state's bushfire crisis. 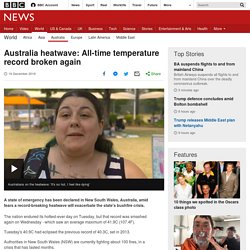 The nation endured its hottest-ever day on Tuesday, but that record was smashed again on Wednesday - which saw an average maximum of 41.9C (107.4F). Tuesday's 40.9C had eclipsed the previous record of 40.3C, set in 2013. Authorities in New South Wales (NSW) are currently fighting about 100 fires, in a crisis that has lasted months. Australian bushfires: How social media provided the world with a window to the crisis. As fires rage across three Australian states, devastating towns, businesses and the lives of the people that support them, helpless onlookers have taken to social media to express their grief and to illustrate the crisis. 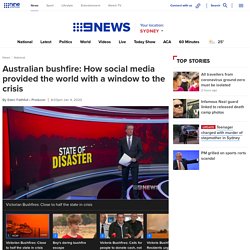 Here is a collection of Tweets spanning the affected states that highlight our nation's response to one of the worst natural disasters we have faced. Nine News reporter Natalia Cooper recorded eye-watering temperatures in Penrith, which was named the hottest place on Earth on Saturday afternoon. She deemed the record-breaking heat "Unbelievable.

" Country Fire Association Operations Manager Bill Johnstone offered a stark view of Cooma, where the entire town turned pitch black at 4.30pm. Why young climate activists have captured the world’s attention. From Jakarta to New York City, children and teenagers are walking out of class and marching in the streets to demand action on climate change. 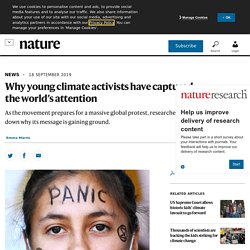 And the world is taking notice. Communications experts say these young climate activists are using their moral authority as children, and their social-media savvy, to surf a rising tide of adult concern. Jamie Margolin founded the protest group Zero Hour in Seattle, Washington, in 2017, when she was just 15. Half a world away, 15-year-old Greta Thunberg started skipping school in 2018 to strike for climate action outside the Swedish parliament in Stockholm. The movement quickly went global. Young people have been talking about climate change for decades. Going viral: what social media activists need to know. Inspiring stories of social activism, such as the Civil Rights movement and the fight against climate change, abound in history. And it is generally thought that the new social media era has helped cases of activism to succeed. But our research has revealed some major threats, which activists need to understand if they are to be successful in getting their message across to the masses.

Social activism refers to a broad range of activities which are beneficial to society or particular interest groups. Social activists operate in groups to voice, educate and agitate for change, targeting global crises. Take, for example, environmental groups such as Greenpeace which aim to curb climate change by targeting governments and major manufacturers with poor environmental records.