Is long service leave out of reach for Gen Y? Posted Long service leave is a unique quirk of Australian labour law that stretches back to the colonial past, allowing workers a few months of paid leave after a decade with one employer. 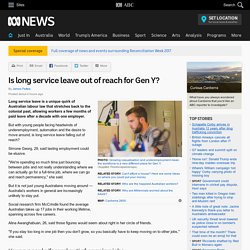 But with young people facing headwinds of underemployment, automation and the desire to move around, is long service leave falling out of reach? Simone Georg, 29, said lasting employment could be elusive. Hays.com. The digital and technological divide between jobseekers’ skills and employers’ requirements has never been greater than it is today as we approach the Fourth Industrial Revolution, according to recruiting experts Hays. 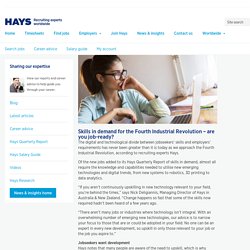 Of the new jobs added to its Hays Quarterly Report of skills in demand, almost all require the knowledge and capabilities needed to utilise new emerging technologies and digital trends, from new systems to robotics, 3D printing to data analytics. Digital Skills. Technology is now part of everyday life for all of us, whether as a student, teacher, administrator, technical specialist, or even just as an ordinary citizen. 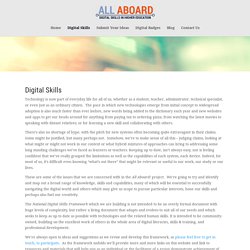 Automation – News, Research and Analysis – The Conversation – page 1. A universal basic income would enable people to embrace the gig economy and give them greater leverage in the jobs they choose. 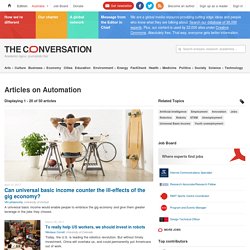 Today, the U.S. is leading the robotics revolution. But without timely investment, China will overtake us, and could permanently put Americans out of work. What do we need to learn today to work with the robots of tomorrow? Robots writing stories? Why top companies are ditching degree requirements for some jobs. 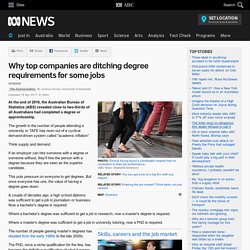 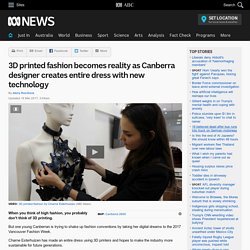 Video: 3D printed fashion by Charne Esterhuizen (ABC News) Zero day exploits: The big bug bounty emerging online. Updated The WikiLeaks data dump of thousands of alleged CIA documents did not just reveal many of the hacking tools used by the agency, it shed more light on shadowy businesses that buy and sell what are known as "zero day exploits". 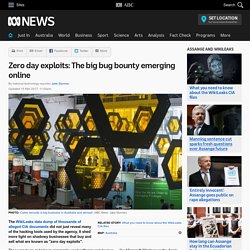 These are bugs or holes in commonly used software and devices — like Microsoft Windows or the Apple iOS which powers the iPhone — that hackers can use to take control. Changes looming for workers as robotics, AI enter new phase. Updated. 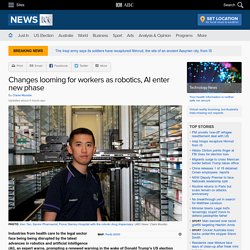 WHAT Are THE Skills Needed From Students In The Future!? That are actually questions which I get asked very often from people and where I could ask ONLY the first one! 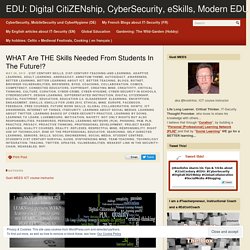 WHAT Are THE Skills Needed From Students In The Future!? Well, there is one well renown person WHO explains it BEST in my opinion, and that is Howard GARDNER. Please check the picture below to understand. Underemployment phenomenon emerges with rise of part-time workforce. Analysis Posted Jobs and growth. 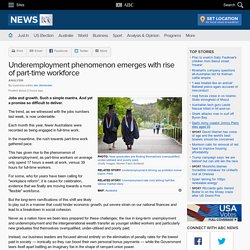 Such a simple mantra. And yet a promise so difficult to deliver. Job Hunting in the Digital Age [Infographic] Job hunting today is not like it was before the dawn of the Internet. Things have changed dramatically. That’s what small business consultant Dave Landry Jr. is here to tell us with this informative infographic. It’s called Job Hunting in the Digital Age. Don Tapscott: How the blockchain is changing money and business. Olivier Scalabre: The next manufacturing revolution is here. Guys, we have an issue. (Laughter) Growth is fading away, and it's a big deal.Our global economy stops growing.And it's not new.Growth has actually declined for the last 50 years.If we continue like this, we need to learnhow to live in a world with no growth in the next decade.This is scary because when the economy doesn't grow,our children don't get better lives.What's even scarier is that when the pie does not grow,each of us get a smaller piece.We're then ready to fight for a bigger one.This creates tensions and serious conflicts.Growth matters a lot.

If we look at the history of growth,times of big growth have always been fueledby big manufacturing revolutions.It happened three times, every 50-60 years.The steam engine in the middle of the 19th century,the mass-production model in the beginning of the 20th century --thanks, Mr. Everyone needs to understand computers in the digital future - Careers with Code - ABC Splash - The digital future has arrived. Dr Karsten Schulz, Program Manager at National ICT Australia, asks what's next for this generation. The world's industries are changing. Are schools preparing our children for the workplaces of the future? Posted Up to 40 per cent of current Australian jobs could disappear within the next 10 to 15 years as robots and computers continue their unstoppable advance.

They have already replaced humans in workplaces such as factories, supermarkets and airline check-in counters. High-tech, clean energy jobs key to future of Geelong, south-west Victoria. Updated Steve Garner understands how important his wind farm manufacturing business is for the town of Portland in south-west Victoria. As the state's traditional manufacturing base continues to decline, jobseekers and the wider economy are looking for the jobs of the future. Six months ago, Mr Garner's Keppel Prince Engineering facility lay idle under the Federal Government's freeze on new wind energy investment and former prime minister Tony Abbott's desire to reduce the growth rate of what he labelled as "visually awful" wind farms.

On 16 June 2015, CEDA released a major report focused on the future of Australia's workforce. Download the report: Australia's future workforce? Read media release: CEDA report: More than five million Aussie jobs gone in 10 to 15 years CEDA's major research report for 2015, Australia's future workforce? I Wanna B - Episodes. Construct My Career. More than half of students chasing dying careers, report warns. Updated Sixty per cent of Australian students are training for jobs that will not exist in the future or will be transformed by automation, according to a new report by the Foundation for Young Australians. Key points. Digital disruption: How science and the human touch can help employees resist the march of the machines. Updated. Labour Market Information Portal. Jobs Australia 2014: Where are the jobs in the NT? The Northern Territory is Australia’s smallest labour market with 129,100 workers or about one per cent of the national total.

Over the five years to November 2013, employment grew strongly (up by 14,200 or 12.4 per cent) and in February 2014 the NT recorded an unemployment rate of 3.7 per cent, well below the national rate of six per cent. This continues the trend of growth from last year, but at 0.9 per cent slower. Workers in the Northern Territory are slightly less likely to have studied after leaving school with two per cent less qualified residents than the national average. About 30 per cent have a certificate III or higher VET qualification and one in four holds a bachelor degree or higher. The report notes that 13 of 19 industries experienced jobs growth. For accommodation and food services, a sharp decline of 31.1 per cent in 2013 has moved to a nine per cent increase in the 2014 report. Mining’s large increase of 74.3 per cent in 2013 is just 2.5 per cent in 2014.