Fashion industry reels as coronavirus shuts shops and cancels orders. The coronavirus pandemic has plunged the $2.5tn (£2tn) global fashion industry into crisis with a “significant number” of firms expected to go bust in the next 18 months, putting millions of jobs at risk. 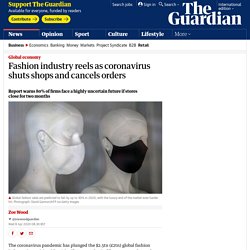 Global fashion sales are predicted to fall by up to 30% in 2020 and the luxury end of the market will be even harder hit, with sales slumping by up to 40%, according to a bleak report by the Business of Fashion (BoF) and consultants McKinsey. If stores remain shut for two months, McKinsey projects that 80% of listed fashion companies in Europe and North America will be in financial distress. The discretionary nature of spending on fashion means investors have taken a dim view of the sector with the average market value of fashion and luxury companies dropping by almost 40% in the first three months of 2020 – a steeper decline than that of the overall stock market. Fashion Industry Coronavirus: COVID-19's Impact on Canadian Designers. Everyone is taking a hit, but small independents are feeling the impact of the coronavirus pandemic the most. 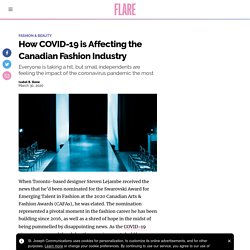 Oltremare - Ludovico Einaudi \\ Jacob's Piano. Fecal Matter Releases “Skin Gloves” That Are Made for Social Distancing—And Yes, Totally Washable. Believe it or not, Fecal Matter conceived of the idea about a year and a half ago, long before the outbreak of COVID-19. 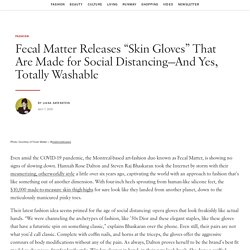 The two had initially planned to show the gloves as part of an intimate fashion presentation in New York at the end of May, but as Dalton puts it, “That changed due to the corona situation.” Giacomo Piazza on the end of fashion as we know it - 1 Granary. OLYA: Hi G!

Agree with most of it. Hyping is dead. so glad to hear that. Believing at least it will change. Real designers and real design will have their era. Good to hear. Good news for new designers. But glocal for me is kind of like educating kids at home. Actually you could send 3 kids to 3 classes according to their age and ability. You could work when they are well educated by well educated professional people. You must think that you could "haute couture" them when they are at home. But the truth is haute couture needs more process, man-hours, capital and cooperation. After 4 weeks quarantine with 3 kids, I have to couture 2 and let 1 go, at the same time I have to study for my own program or work for other case. Glocal seems ideally for local economic, but the execution and realization will be another story. As there are a few clients that from other continents are shopping on T-mall and wait for several weeks to get their goods. if local digital space do not go fast, it will be like 5G, use it, you will pay for patent fee; but if you refuse it, you will probably lose whole market and be excluded of new tech revolution. – yuanyuan2020 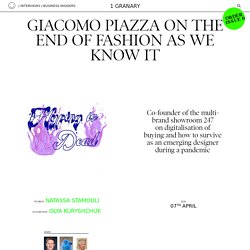 GEORGES HOBEIKA Haute Couture Spring Summer 2020 Collection. Coronavirus: The good that can come out of an upside-down world. Our world has changed immensely in the last few weeks but amid the upheaval and distress, there are reasons to believe we can emerge from the crisis with some human qualities enhanced, writes Matthew Syed. 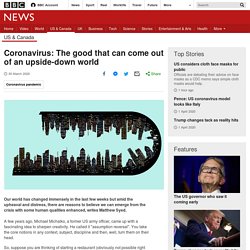 A few years ago, Michael Michalko, a former US army officer, came up with a fascinating idea to sharpen creativity. U.S. weekly jobless claims surge to record 3.28 million. The number of Americans filing claims for unemployment benefits surged to a record of more than 3 million last week as strict measures to contain the coronavirus pandemic brought the country to a sudden halt, unleashing a wave of layoffs that likely ended the longest employment boom in U.S. history.

”The number of Americans filing claims for unemployment benefits surged to a record of more than 3 million last week. the Federal Reserve take extraordinary steps and the U.S. Congress to assemble a record US$2-trillion stimulus package.“ when new technology evolution is not coming yet, 2 trillion dollar will be used where is very important. With a high unemployment rate, the poor will reduce their consuming on fashion, the rich will be worn low-key to avoid hatred. – yuanyuan2020

The weekly jobless claims report from the Labour Department on Thursday offered the clearest evidence yet of the coronavirus’s devastating impact on the economy, which has forced the Federal Reserve to take extraordinary steps and the U.S. 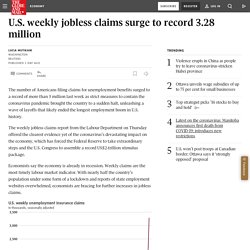 Congress to assemble a record US$2-trillion stimulus package. Economists say the economy is already in recession. Weekly claims are the most timely labour market indicator. With nearly half the country’s population under some form of a lockdown and reports of state employment websites overwhelmed, economists are bracing for further increases in jobless claims.

U.S. weekly unemployment insurance claims. Cartel. Mutually beneficial collusion among competing corporations A cartel is a group of an independent market participants who collude with each other in order to improve their profits and dominate the market.

Is there a cartel in fashion industry? – yuanyuan2020

Cartels are usually associations in the same sphere of business, and thus an alliance of rivals. 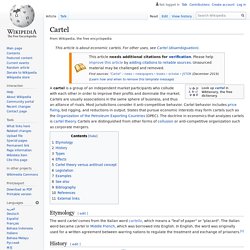 Most jurisdictions consider it anti-competitive behavior. Cartel behavior includes price fixing, bid rigging, and reductions in output. States that pursue economic interests may form cartels such as the Organization of the Petroleum Exporting Countries (OPEC). Etymology[edit] The word cartel comes from the Italian word cartello, which means a "leaf of paper" or "placard".

Sarah Burton may be one of the most discreet designers on earth, but on 14 February, 2020, what amounts to a big, thoughtful Alexander McQueen gift from her to future designers will begin to become visible on the first day of London Fashion Week. 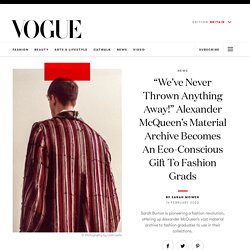 A scheme to distribute unused McQueen fabric to fashion colleges throughout the UK will be threaded through students’ collections at University of Westminster and Central Saint Martins graduation shows. HuffPost is now a part of Verizon Media. Dezeen. For his graduate collection at the London College of Fashion, menswear designer Harikrishnan has matched cropped tailored jackets with billowing latex trousers to create exaggerated silhouettes.

New designers suppose to have their design seen by people. 100-years-old brands did their contribution to fashion industry for sure. What they do for now? Are they cultivate new designers or they build up their castle and barrier theirselves? – yuanyuan2020

The super-wide inflatable trousers consist of up to 30 individual latex panels, which are either plain white or arranged in contrasting colour blocks of brick red and forest or mint green. 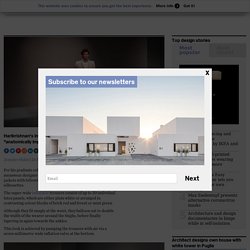 Should we ration fashion? Lessons in sustainability from the second world war. A wartime-style economy is often cited as a potential path towards meeting our international carbon emissions agreements. 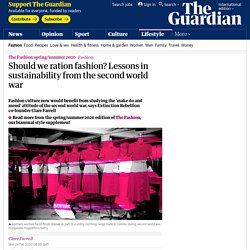 In debates about the fashion industry, the idea of a shift as radical as the one that took place in the second world war is frequently mooted in conversations about sustainability. Clearly this is a problematic comparison. It is important not to romanticise the violence of war or glamorise the reality of political states of emergency. Untitled. Indila - Feuille d&#39;automne (Clip Officiel + parole)

India music mixed with pop music has a chemical reaction. Tradition plus popular fashion could always be a way of creative. – yuanyuan2020

I am not a virus, I am a human. Full Address and Q&A. YouTube. YouTube. YouTube. What high fashion is doing about cultural appropriation. Image copyright Getty Images/ Gucci/ D&G Dolce & Gabbana trivialising Chinese culture in a campaign in 2018. Gucci pulling a jumper that resembles blackface in 2019. Commes Des Garçons using cornrow wigs on white models in 2020. Just three examples of insensitivity and perceived cultural appropriation that have been criticised in high fashion over the last few years. When Dolce & Gabbana faced backlash after posting videos of a Chinese model trying to eat pasta and pizza with chopsticks as part of its Shanghai campaign, its co-founder Domenico Dolce promised to do better.