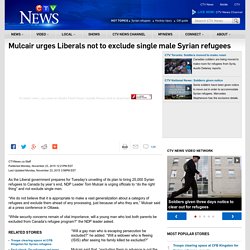 “We do not believe that it is appropriate to make a vast generalization about a category of refugees and exclude them ahead of any processing, just because of who they are,” Mulcair said at a press conference in Ottawa. “While security concerns remain of vital importance, will a young man who lost both parents be excluded from Canada’s refugee program?”

The NDP leader asked. “Will a gay man who is escaping persecution be excluded?” Mulcair said that, “excluding them in advance is not the Canadian way,” and likened it to “the previous Conservative government’s plan to prioritize certain religious groups over others.” Military bases being readied. How Canada is helping Syrian and Iraqi refugees. The Government of Canada remains deeply concerned about the escalating violence in Syria and about the increasing humanitarian needs there and in neighboring countries. 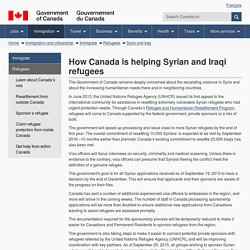 In June 2013, the United Nations Refugee Agency (UNHCR) issued its first appeal to the international community for assistance in resettling extremely vulnerable Syrian refugees who had urgent protection needs. Through Canada’s Refugee and Humanitarian Resettlement Program, refugees will come to Canada supported by the federal government, private sponsors or a mix of both. The government will speed up processing and issue visas to more Syrian refugees by the end of this year. The overall commitment of resettling 10,000 Syrians’ is expected to be met by September 2016 –15 months earlier than planned.

Canada’s existing commitment to resettle 23,000 Iraqis has also been met. Visa officers will focus interviews on security, criminality and medical screening. 60% of Canadians disagree with Liberal plan to accept Syrian refugees: Ipsos poll. One week after the devastating terror attacks in Paris, a new Ipsos poll shows a majority of Canadians disagree with the Liberal government’s plan to resettle 25,000 refugees by the end of the year. 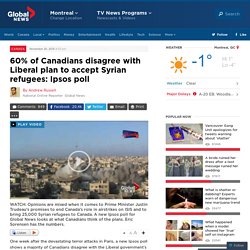 The Ipsos poll, conducted exclusively for Global News, found that 60 per cent of Canadians disagree with Justin Trudeau’s election promise to relocate 25,000 people displaced largely due to the conflict in Syria. READ MORE: Here’s how refugees are screened before arriving in Canada Opposition is highest in Alberta with 70 per cent and lowest in Ontario with 56 per cent. The major concern among those who oppose the Liberal’s refugee plan is security and the fear that appropriate security checks will be limited in order to hit Trudeau’s timeline. “There’s a sense that the speed with which this is taking place will be at the expense of the security of Canadians,” said Darrell Bricker, president of Ipsos. READ MORE: No, Canada doesn’t spend more on refugees than on pensioners. 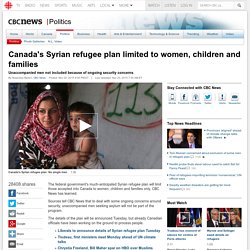 Sources tell CBC News that to deal with some ongoing concerns around security, unaccompanied men seeking asylum will not be part of the program. The details of the plan will be announced Tuesday, but already Canadian officials have been working on the ground to process people. In the last six weeks alone, Canadian authorities have managed to screen about 100 people a day in Lebanon to help the government reach its ambitious target of getting 25,000 Syrian refugees here by the end of the year. Understanding the Refugee Crisis in Europe, Syria, and around the World. Germany to Spend $6.6 Billion on 800,000 Refugees and Migrants. Germany will spend around $6.6 billion to cope with some 800,000 migrants and refugees expected to have crossed into the country by the end of 2015, the government said early Monday. 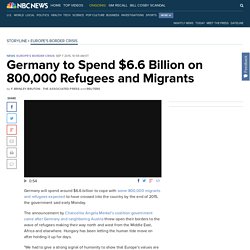 The announcement by Chancellor Angela Merkel's coalition government came after Germany and neighboring Austria threw open their borders to the wave of refugees making their way north and west from the Middle East, Africa and elsewhere. Hungary has been letting the human tide move on after holding it up for days. "We had to give a strong signal of humanity to show that Europe's values are valid also in difficult times. Hungary's handling of the crisis is unbearable," said Germany's Secretary-General Yasmin Fahimi. Emotional scenes of Germans and Austrians civilians welcomed exhausted migrants arriving in their countries have contrasted starkly with the treatment they had received in Hungary.