Washington Journal Peter Moskos Police Shootings. Police Have Officially Killed 400 People in 2015, A New Grieving Family Every... As of May 5, 2015, the police in the United States of America have killed 401 people that we know of. 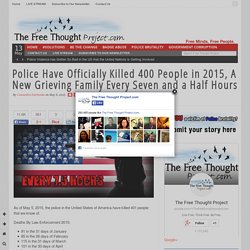 Deaths By Law Enforcement 2015: 91 in the 31 days of January85 in the 28 days of February115 in the 31 days of March101 in the 30 days of April8 people in the 5 days of May Extrapolating those numbers out to an hourly figure and the police have killed someone on average, every 7.48 hours. While there is no government-run database, Killed By Police has taken it upon themselves to keep track, and are doing a fantastic job thus far. USA Militia & When To Shoot Enemy Traitor Cops!! 2015 USA. What 16 Months Of Police Killings In The U.S. Looks Like. There’s just one problem with this ridiculously adorable stuffed Vladimir Putin doll on Kickstarter: the Kremlin just passed a law against using internet memes to make fun of celebrities. 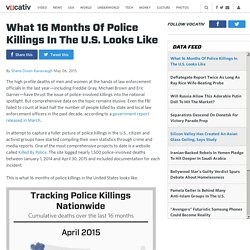 Baltimore Unrest Shows America’s Police State Has Failed To Learn From History. Ben Morris May 2, 2015 (TFC) Baltimore, MD — It is a story that has been played out too many times. 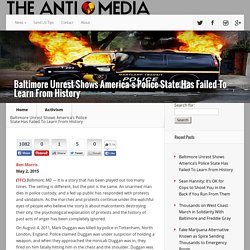 The setting is different, but the plot is the same. Rachel Maddow Breaks Down Epidemic of Police Brutality Towards Unarmed Minori... In this informative clip, Rachel Maddow breaks down the tragic episodes of extrajudicial police killings that have been occurring with an alarming frequency in the past year. 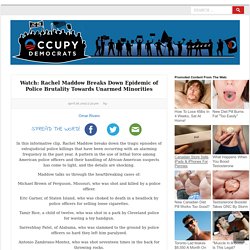 A pattern in the use of lethal force among American police officers and their handling of African-American suspects has come to light, and the details are shocking. Maddow talks us through the heartbreaking cases of: Michael Brown of Ferguson, Missouri, who was shot and killed by a police officer. Eric Garner, of Staten Island, who was choked to death in a headlock by police officers for selling loose cigarettes. Tamir Rice, a child of twelve, who was shot in a park by Cleveland police for waving a toy handgun. “Disruptive Hooliganism” Vs. American [Dumb]ocracy.

Yes, Black America Fears The Police. Here's Why. This story was co-published with Politico Magazine. 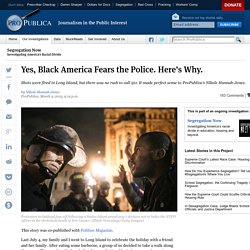 Last July 4, my family and I went to Long Island to celebrate the holiday with a friend and her family. Police Killings in America, Day By Day — Matter.

The Five Deadliest Police States of 2014. If you had to guess which states had the most per-capita police involved deaths, would you include states like California, Texas, or New York? 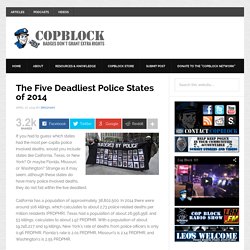 Or maybe Florida, Missouri, or Washington? Strange as it may seem, although these states do have many police involved deaths, they do not fall within the five deadliest. California has a population of approximately 38,802,500. In 2014 there were around 106 killings, which calculates to about 2.73 police related deaths per million residents (PRDPMR). Police Actually Do Show Restraint—When They’re Facing Armed White Guys. The Root , News Report, Charles D. 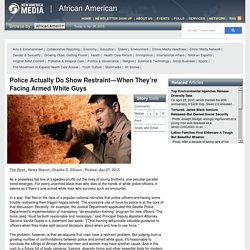 Ellison , Posted: Apr 27, 2015 As a ceaseless flat line of tragedies snuffs out the lives of young brothers, one peculiar parallel trend emerges: For every unarmed black man who dies at the hands of white police officers, it seems as if there’s one armed white man who survives such an encounter. In a way, that flies in the face of a popular national narrative that police officers are having some trouble restraining their trigger-happy selves.

The excessive use of force by police is at the core of that discussion: Recently, for example, the Justice Department applauded the Seattle Police Department’s implementation of mandatory “de-escalation training” program for new officers. The force used “must be both reasonable and necessary,” said Principal Deputy Assistant Attorney General Vanita Gupta in a statement last week. Five Simple Solutions to Fix the Police State. Message To Police - Josie the Outlaw. Glogin?mobile=1&URI= "You Might Be a Terrorist If ...": Leaked Document Reveals Secret TSA Check List. "The SPOT program is bullshit," the manager told The Intercept. 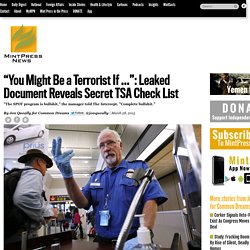 "Complete bullshit. " A TSA officer signals an airline passenger forward at a security check-point at Seattle-Tacoma International Airport, Monday, Jan. 4, 2010 (AP/Elaine Thompson) Obtained exclusively by The Intercept and described in a news story on Friday, a leaked Transportation Safety Administration document reveals the “suspicious signs”—including excessive yawning, a cold hard stare, or a rigid posture—that TSA agents have been trained to look for as airline passengers make their way through U.S. airports in the post-9/11 era.

The document details how a 92-point checklist for TSA agent is divided into numerous categories with a point score corresponding to the various kinds of personal traits or behaviors exhibited by unwitting travelers. According to The Intercept: This work is licensed under a Creative Commons Attribution-Share Alike 3.0 License Share this article! Print This Story. The 10 Most Crooked and Corrupt Things the FBI has Ever Done. Carey Wedler March 24, 2015 (TFC) Washington, D.C. — Though the FBI is often credited with solving crimes, the bureau’s assistance comes at a cost. 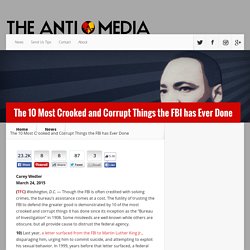 The futility of trusting the FBI to defend the greater good is demonstrated by 10 of the most crooked and corrupt things it has done since its inception as the “Bureau of Investigation” in 1908. Some misdeeds are well-known while others are obscure, but all provide cause to distrust the federal agency. 10) Last year, a letter surfaced from the FBI to Martin Luther King Jr., disparaging him, urging him to commit suicide, and attempting to exploit his sexual behavior.

In 1999, years before that letter surfaced, a federal jury decided that government agencies were involved in King’s assassination. How the FBI Created a Terrorist. IN THE VIDEO, Sami Osmakac is tall and gaunt, with jutting cheekbones and a scraggly beard. 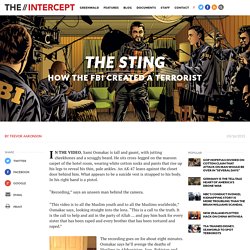 He sits cross-legged on the maroon carpet of the hotel room, wearing white cotton socks and pants that rise up his legs to reveal his thin, pale ankles. An AK-47 leans against the closet door behind him. What appears to be a suicide vest is strapped to his body. Whites More Likely To Use Drugs, Blacks More Likely To Go To Jail For It. April V. Taylor As the country continues to grapple with race in the context of the criminal justice system, it is important to not forget just how much of a role the War on Drugs and its disproportionate impact on Black families and communities plays in the perpetuation of racism and inequality. Black people now constitute nearly 1 million of the total 2.3 million people who fill America’s jails and prisons, finding themselves incarcerated at a rate nearly six times that of whites.

The Case For Disarming The Police. In a nation where approximately one third of the population owns guns, it might sound strange to argue that police officers should not “police” the community while being armed. After all, the Second Amendment does protect the rights of citizens to keep or “own” and bear or “carry” firearms. The Supreme Court, which is charged with interpreting the Constitution, has consistently ruled that the Second Amendment applies to individual self-defense, and was never intended as a provision related to hunting or the military.

But here’s the catch… there was no such thing as police officers when the Constitution was written. Seriously. Reverse Police Brutality. When Citizens Fight Back. The War on Drugs and the Prison Industrial Complex Explained in Pictures: 7 I... Created by Colorlines.com Created by Online-Paralegal-Degree.org. The policing of black bodies: Racial profiling for profit and the killing of ... March 23, 2015 Orlando de Guzman Orlando is a contributor to Fusion. Tim Pool Tim Pool is director of media innovation at Fusion, and a mobile and technology specialist covering conflict, crisis, and internet culture on the ground and online. Share the Wealth By submitting above you agree to Fusion's Privacy Policy. Former inmate says new King County youth jail is a mistake - The Seattle Glob...

A “f**kbarrel” of fines: John Oliver reveals the disturbing way police are pr... This Is What It's Like To Go To Court In Ferguson, Missouri - BuzzFeed News. Please Stop Telling Me That All Lives Matter  Should Judges Lock Kids Up For Skipping School? 9 surprising industries getting filthy rich from mass incarceration. It’s no coincidence that the United States now imprisons more of its people than any other country in the world: mass incarceration has become a giant industry in the U.S., resulting in huge profits not only for private prison companies, but also, for everything from food companies and telecoms to all the businesses that are using prison labor to cut their manufacturing costs. The prison-industrial complex even has its own lobbyists: according to a 2011 report from the Justice Policy Institute (JPI), the U.S.’ largest private prison company, the Corrections Corporation of America (CCA), and their competitor the GEO Group have both spent hundreds of thousands of dollars lobbying forlonger prison sentences.