The Fifth Column. Homan Square Protesters, Alex Freeman (TFC) With the whistle having been blown on the Chicago Police Department for their activities in Homan Square, you can expect nationwide protests in the coming weeks and months. 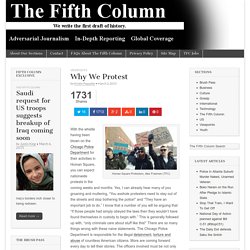 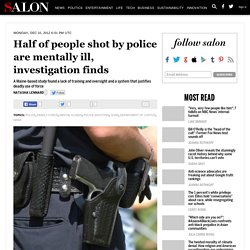 There are no federal statistics on police shootings of mentally ill people, but according to the investigation published this week, “a review of available reports indicates that at least half of the estimated 375 to 500 people shot and killed by police each year in this country have mental health problems.” The newspapers analyzed in detail the incidents of police deploying deadly force in Maine — a state with a comparatively low crime rate — since 2000. The report noted: 42 percent of people shot by police since 2000 — and 58 percent of those who died from their injuries — had mental health problems, according to reports from the Maine Attorney General’s Office. We Need to “KEEP FEAR ALIVE” FBI Official Explains How Govt Needs You in Fear... A documentary film, The Newburgh Sting, premiered at the Tribeca Film Festival in April of last year. 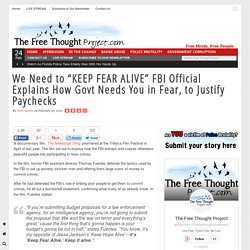 The film set out to expose how the FBI entraps and coaxes otherwise peaceful people into participating in hoax crimes. In the film, former FBI assistant director Thomas Fuentes defends the tactics used by the FBI to set up poverty-stricken men and offering them large sums of money to commit crimes. Days After LAPD Kills Unarmed Homeless Man, 3 Men in Ski Masks Open Fire on O... 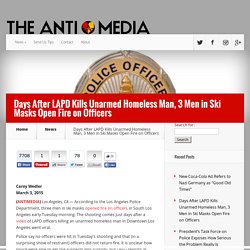 The shooting comes just days after a video of LAPD officers killing an unarmed homeless man in Downtown Los Angeles went viral. Police say no officers were hit in Tuesday’s shooting and that (in a surprising show of restraint) officers did not return fire. It is unclear how police were able to get the suspects into custody, but LAPD reports at least one of them was armed. There are currently conflicting stories as CBS Los Angeles reported at 6:40 AM that the men were searched and no weapon was found. Impersonating an officer. Cop Pleads Not Guilty After Shocking Video Shows Him Kill an Unarmed Veteran ... Monroe, LA– West Monroe Police Officer Jody LeDoux plead not guilty at his arraignment on Thursday, for negligent homicide after shooting and killing homeless veteran, Raymond Keith Martinez, 51, in December. 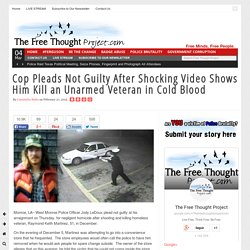 “Transparency Meets Privacy” Seattle Police Launch YouTube Channel to Release... Police in Seattle have launched a YouTube channel to share officer body camera footage with the public, while using software written by local developers to blur and redact the videos in a bid to protect privacy. 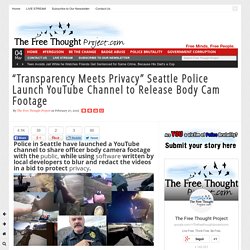 RT.com Facing a flood of requests for public disclosure, the Seattle Police Department (SPD) was at a loss on how to efficiently redact the videos in order to protect the privacy of both officers and suspects. According to a Seattle Times report, the SPD has collected more than 1.5 million videos – 364 terabytes – over the past five years. The software currently being tested was conceived during the December 2014 ‘hackathon,’ following the SPD’s call for help to local tech talent. Separate. I’m a cop. If you don’t want to get hurt, don’t challenge me.

Police in Ferguson, Mo., over the weekend. 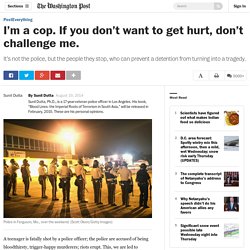 (Scott Olson/Getty Images) A teenager is fatally shot by a police officer; the police are accused of being bloodthirsty, trigger-happy murderers; riots erupt. 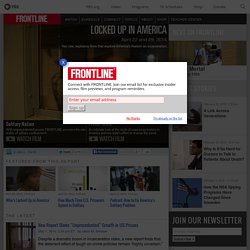 Breslow Despite a dramatic boom in incarceration rates, a new report finds that the deterrent effect of tough-on-crime policies remain “highly uncertain.” CANCELLED: Live Chat: Can America Kick Its Addiction to Incarceration? April 29, 2014, 9:41 pm ET · by Patrice Taddonio Filmmaker Dan Edge and Huffington Post justice reporter Ryan Reilly will answer this question — and take yours. For Some Felons, a Better Chance to Break the Re-entry Cycle April 29, 2014, 9:40 pm ET · by Sarah Childress. Civil forfeiture. Women in prison. Seattle Police Officers Guild: Curbstomping Accountability. "stop resisting" "get off my gun" The tale of the police dashcam video has now helped clear a Bloomfield, New Jersey man who faced a multitude of criminal charges, including eluding police and assault. 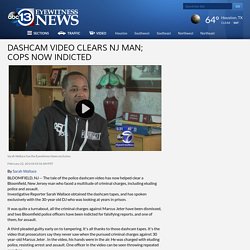 Investigative Reporter Sarah Wallace obtained the dashcam tapes, and has spoken exclusively with the 30-year old DJ who was looking at years in prison. It was quite a turnabout, all the criminal charges against Marcus Jeter have been dismissed, and two Bloomfield police officers have been indicted for falsifying reports, and one of them, for assault. A third pleaded guilty early on to tampering. It's all thanks to those dashcam tapes. MLK. 3 stooges. Landscapers. Tyranny. Simpsons. Fascism. Criminals. Pizza guy. Or we'll fucking kill you. Next. Lone wolf. He fell. Not a pussy. Underground Railroad. Fuck racist cops. 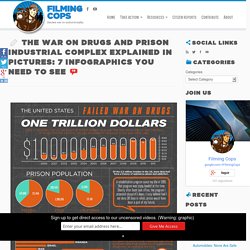 Unarmed People of Color Killed by Police, 1999-2014. Clinton Allen, 25, Dallas, TX - March 10, 2013 Clinton Allen was shot 7 times by Dallas police officer Clark Staller, who was responding to a domestic disturbance call at Allen's girlfriend's house. Blood On Their Hands: The Racist History of Modern Police Unions. Wednesday, Jan 14, 2015, 6:00 am BY Flint Taylor Police unions have always played a powerful role in defending cops—no matter how brutal and racist their actions. (Ben Musseig / Flickr) Outraged by New York City Mayor Bill de Blasio’s statements concerning the killing of Eric Garner, Patrick Lynch, the longtime leader of the New York City Patrolmen’s Benevolent Association (PBA), the NYPD’s officers union, recently made the outrageous assertion that the Mayor had “blood on his hands” for the murder of the two NYPD officers. In Milwaukee this past fall, the Police Association called for, and obtained, a vote of no confidence in MPD Chief Ed Flynn after he fired the officer who shot and killed Dontre Hamilton, an unarmed African American; subsequently, the union’s leader, Mike Crivello, praised the District Attorney when he announced that he would not bring charges against the officer.

New York. Origins of the police. The Five Points district of lower Manhattan, painted by George Catlin in 1827. New York’s first free Black settlement, Five Points was also a destination for Irish immigrants and a focal point for the stormy collective life of the new working class. 6 Ideas for a Cop-Free World. After months of escalating protests and grassroots organizing in response to the police killings of Michael Brown and Eric Garner, police reformers have issued many demands.

The moderates in this debate typically qualify their rhetoric with "We all know we need police, but... " It's a familiar refrain to those of us who've spent years in the streets and the barrios organizing around police violence, only to be confronted by officers who snarl, "But who'll help you if you get robbed? " We can put a man on the moon, but we're still lacking creativity down here on Earth.

But police are not a permanent fixture in society. While law enforcers have existed in one form or another for centuries, the modern police have their roots in the relatively recent rise of modern property relations 200 years ago, and the "disorderly conduct" of the urban poor. Five Myths About Crime in Black America—and the Statistical Truths. From Colorlines In the wake of Trayvon Martin’s death, we’ve seen a lot of discussion of the larger societal issues that play into how and when people are perceived as criminals. There were hoodies, there were marches, and there were frank talks from parent to child about how to minimize the danger of being a young person of color.

On the other side, there were justifications of George Zimmerman’s actions: a smear campaign against Martin’s character, and plenty of writers explaining that statistically, blacks are simply more dangerous to be around. If You Are Doing Nothing Wrong You Have PLENTY to Fear – 30 Examples. Accountability. Delegitimization. But... Ur ruining my life.