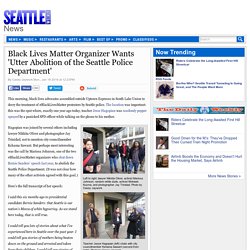 The location was important: this was the spot where, exactly one year ago today, teacher Jesse Hagopian was randomly pepper sprayed by a panicked SPD officer while talking on the phone to his mother. Hagopian was joined by several others including lawyer Nikkita Oliver and photographer Jay Trinidad, not to mention city councilmember Kshama Sawant. But perhaps most interesting was the call by Marissa Johnson, one of the two #BlackLivesMatter organizers who shut down Bernie Sanders’ speech last year, to abolish the Seattle Police Department.

(It was not clear how many of the other activists agreed with this goal.) Here’s the full transcript of her speech: I said this six months ago to presidential candidate Bernie Sanders: that Seattle is our nation’s Mecca of white hypocrisy. Seattle hates black people. Giphy. _nzzy9bHLvw1tsf68ao1_400. Pug picks fight with police dog outside Phoenix barricade. Heartwarming! This Cop Cares So Much For The Peop... Wow. 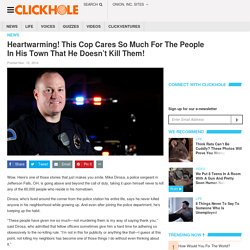 Here’s one of those stories that just makes you smile. Mike Dirosa, a police sergeant in Jefferson Falls, OH, is going above and beyond the call of duty, taking it upon himself never to kill any of the 60,000 people who reside in his hometown. Dirosa, who’s lived around the corner from the police station his entire life, says he never killed anyone in his neighborhood while growing up. And even after joining the police department, he’s keeping up the habit. “These people have given me so much—not murdering them is my way of saying thank you,” said Dirosa, who admitted that fellow officers sometimes give him a hard time for adhering so obsessively to the no-killing rule.

Sound implausible? Mike Dirosa is just more proof that, every now and then, it’s good to hear about people doing nice things for no reason at all. What about you? Child pornography, War Crimes, Fraud AND torture: Internal CIA Probes AnonHQ. December 1st, 2015 | by CoNN Intelligence Child pornography, war crimes AND torture.

You’d expect this to describe an organisation like ISIS… but the CIA ?! (it’s probably less shocking to some, particularly after the Senate investigation into torture) Although the CIA has an Office of Inspector General (OIG), as with all federal government agencies it is designed to investigate employees for criminal activity, it has been able to keep the details of the investigations under wraps and away from the eyes of the public. Documents released by the spy agency itself has revealed that despite dozens of serious allegations of misconduct related to its employees, the Justice Department has chosen not to prosecute most of the cases.

These redacted records can be seen below: Get Your Anonymous T-Shirt / Sweatshirt / Hoodie / Tanktop, Smartphone / Tablet Cover or Mug In Our Spreadshirt Shop! When Law Enforcement is the Perpetrator. When Law Enforcement is the Perpetrator Last Thanksgiving I posted Police Trading in Child Rape & Torture profiling nearly 70 local and state police officers arrested on child pornography charges. 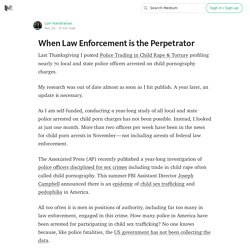 My research was out of date almost as soon as I hit publish. A year later, an update is necessary. Animated GIF. Fuck The Police GIF. _mnd8uvJkgf1ql4skqo1_400. _nwi4l3ii3o1s02vreo7_400. The County: the story of America's deadliest police. By Jon Swaine and Oliver Laughland in Bakersfield, California. 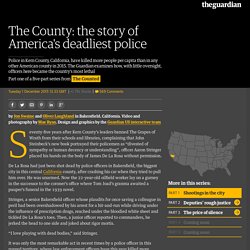 Video and photography by Mae Ryan. Design and graphics by the Guardian US interactive team Seventy-five years after Kern County’s leaders banned The Grapes of Wrath from their schools and libraries, complaining that John Steinbeck’s new book portrayed their policemen as “divested of sympathy or human decency or understanding”, officer Aaron Stringer placed his hands on the body of James De La Rosa without permission. De La Rosa had just been shot dead by police officers in Bakersfield, the biggest city in this central California county, after crashing his car when they tried to pull him over. He was unarmed. Stringer, a senior Bakersfield officer whose plaudits for once saving a colleague in peril had been overshadowed by his arrest for a hit-and-run while driving under the influence of prescription drugs, reached under the bloodied white sheet and tickled De La Rosa’s toes. “I love playing with dead bodies,” said Stringer.