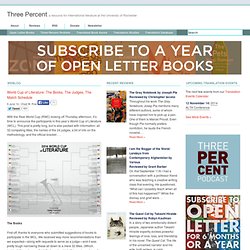 This post is pretty long, but is also packed with information: all 32 competing titles, the names of the 24 judges, a bit of info on the methodology, and the official bracket . . . The Books First off, thanks to everyone who submitted suggestions of books to participate in the WCL. We received way more recommendations than we expected—along with requests to serve as a judge—and it was pretty tough narrowing these all down to a mere 32 titles.

(Which, incidentally, makes me think that we should do this again next year for the Women’s World Cup, but include only books written by women.) Skype Resources - Skype Adventures! The Art of Reading Aloud. In countless studies to discover the critical elements that lead to successful reading, countless successful readers have replied that they were surrounded by books in the home and the bedtime read-aloud was a nightly ritual. 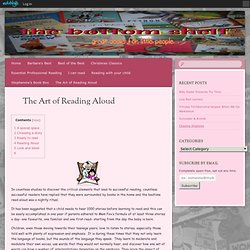 It has been suggested that a child needs to hear 1000 stories before learning to read and this can be easily accomplished in one year if parents adhered to Mem Fox’s formula of at least three stories a day- one favourite, one familiar and one first-read- starting from the day the baby is born. Children, even those moving towards their teenage years, love to listen to stories, especially those told well with plenty of expression and emphasis.

It is during these times that they not only learn the language of books, but the sounds of the language they speak. To Be or Not To Be: Hamlet as a Choose-Your-Own-Adventure Novel. By Maria Popova Ophelia as an emancipated science-lover and Hamlet as an emo thirty-something. Parodies of Shakespeare — such as the recent Shakespearean rendition of Star Wars — may enrage purists as a perversion of the literary canon’s greatest works , but given the Bard’s very existence, or at the very least “his” authorship, is now being pulled into question , it pays to take such parodic homages in good humor rather than outrage. That’s precisely the disarming effect of To Be or Not To Be ( public library ) by Ryan North , author of the popular webcomic Dinosaur Comics — a choose-your-own-adventure version of Hamlet , in which you can experience the Shakespeare classic through the perspective of various characters and alter the course of their fates.

It offers a total of 110 alternative death scenes, illustrated by some of today’s most exciting graphic artists, including Brain Pickings favorite Kate Beaton . Files.eric.ed.gov/fulltext/ED496343. 52 Lies Children's Books Told You Growing Up. 11 Essential Stephen King Books. All 339 Books Referenced In "Gilmore Girls" Library Bingo. It is second semester, and as those of you in school libraries know, time tends to slow down considerably during the month of March. 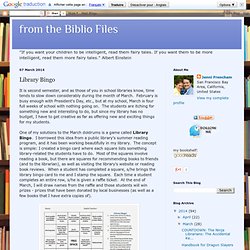 February is busy enough with President's Day, etc., but at my school, March is four full weeks of school with nothing going on. The students are itching for something new and interesting to do, but since my library has no budget, I have to get creative as far as offering new and exciting things for my students. One of my solutions to the March doldrums is a game called Library Bingo. I borrowed this idea from a public library's summer reading program, and it has been working beautifully in my library.

The concept is simple: I created a bingo card where each square lists something library-related the students have to do. Students who complete the entire bingo card earn a free book from our upcoming Scholastic Book Fair (I will use our Scholastic Dollars to pay for these books). I am more than willing to share my bingo cards. Camp NaNoWriMo. The Greatest Books of All Time, As Voted by 125 Famous Authors. “Reading is the nourishment that lets you do interesting work,” Jennifer Egan once said. 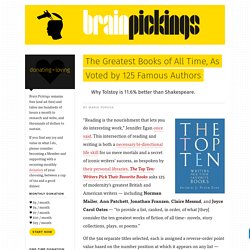 This intersection of reading and writing is both a necessary bi-directional life skill for us mere mortals and a secret of iconic writers’ success, as bespoken by their personal libraries. The Top Ten: Writers Pick Their Favorite Books asks 125 of modernity’s greatest British and American writers — including Norman Mailer, Ann Patchett, Jonathan Franzen, Claire Messud, and Joyce Carol Oates — “to provide a list, ranked, in order, of what [they] consider the ten greatest works of fiction of all time– novels, story collections, plays, or poems.”

Of the 544 separate titles selected, each is assigned a reverse-order point value based on the number position at which it appears on any list — so, a book that tops a list at number one receives 10 points, and a book that graces the bottom, at number ten, receives 1 point. In introducing the lists, David Orr offers a litmus test for greatness: Anti-URL Shortener Promotes Books Through Web Links [Video. Respublica, a Russian bookstore geared toward a younger audience, has created a URL lengthener that offers a sneak peek at a selection of novels on sale. 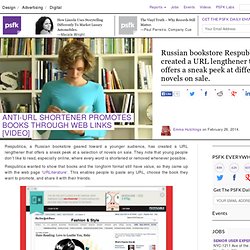 They note that young people don’t like to read, especially online, where every word is shortened or removed whenever possible. Respublica wanted to show that books and the longform format still have value, so they came up with the web page ‘URLiterature‘. This enables people to paste any URL, choose the book they want to promote, and share it with their friends. Middle Grade Readers - Children - Young Readers. NOW AND THEN: Paper Crafts « Decor Arts Now. Amazing art project Wiry Limbs, Paper Backs anthropomorphizes literary classics  · Great Job, Internet! The 1999 live action/animated combination film The Pagemaster featured a trio of comically anthropomorphized books voiced by Patrick Stewart, Whoopi Goldberg, and Frank Welker. 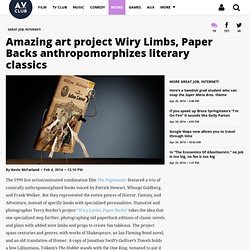 But they represented the entire genres of Horror, Fantasy, and Adventure, instead of specific books with specialized personalities. Humorist and photographer Terry Border’s project “Wiry Limbs, Paper Backs” takes the idea that one specialized step further, photographing old paperback editions of classic novels and plays with added wire limbs and props to create fun tableaus. BOOK RIOTHouses Made of Books. Livio De Marchi is a bonkers-talented Venetian woodworker and sculptor who has created- wait for it- ENTIRE HOUSES made of hand-carved book sculptures. 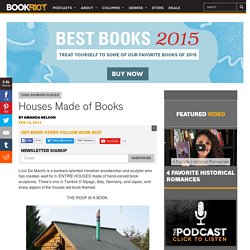 There’s one in Tambre D’Alpago, Italy, Germany, and Japan, and every aspect of the houses are book-themed. The chair looks like book leather and binding, and the dining “furniture” is…BOOKS. Another view of the dining room table and the “book” shelves. 9 Life Lessons Everyone Can Learn From These Beloved Classic Children's Books. Our very favorite children's books left an irreversible impression on our childhoods and on our lives. 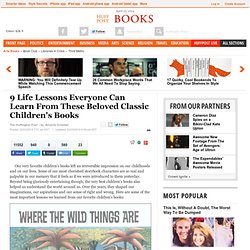 Some of our most cherished storybook characters are so real and palpable in our memory that it feels as if we were introduced to them yesterday. Beyond being gloriously entertaining though, the very best children's books also helped us understand the world around us. Over the years, they shaped our imaginations, our aspirations and our sense of right and wrong. Here are some of the most important lessons we learned from our favorite children's books: 1.

Maurice Sendak's Where the Wild Things Are is the perfect story for every child who's ever dreamed of running away. 2. In Dr. Gene_K17: #narratives #A2Comms... I’ll Never Ever Look At Books The Same Again After Seeing These Hidden Messages. Wow. It’s very possible that one of your battered old books contains an amazing secret called a “fore-edge painting,” which is an illustration that is hidden on the edge of the pages of the book. 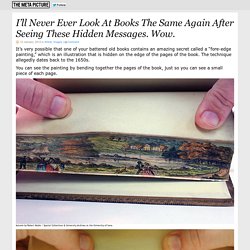 Teen Issues. 22 Things That Belong In Every Bookworm's Dream Home. Maria Keller, 13-Year-Old Minnesota Girl, Donates 1 Million Books. At age 8, Maria Keller, of Orono, Minn., learned that not all children own a book. 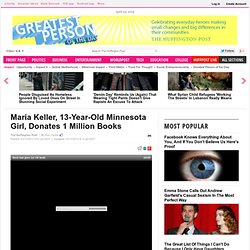 Determined to do something about it, she declared she would donate 1 million books to kids in need by the time she turned 18. Keller not only reached her goal this week, she did it five years early. Most Famous Book Set In Every State [MAP] Quiz: Can You Guess Which Books Inspired These Fictitious Food Scenes. The Most Bookish Teens in Fiction: Jo March, Holden Caulfield and More. The Dream Thieves Release Day. The Raven Boys - Animated Book Trailer by Maggie Stiefvater. Vampire Academy Trailers & Clips. Laurie Halse Anderson tackles alcoholism, PTSD in book. Laurie Halse Anderson is known for writing realistic books about controversial subjects for teens. Her book Speak, about the victim of rape, made waves when it was published 15 years ago and is considered one of the most important — and controversial — books for young readers.

The Desolation of Statistics: Book Length vs. Movie Length, Part 2. Welcome to Overthinking It, the site that subjects the popular culture to a level of scrutiny it probably doesn't deserve. There's much more where this came from, so if you like this article: “A wizard’s data is never accurate nor inaccurate. He graphs it precisely how he means to.” [Update: I've uploaded the raw data to Google Docs for your number crunching pleasure.] 5 Easy Ways to Spot a B.S. News Story on the Internet. The Internet, while awesome, is also a mind-boggling marvel of bullshit production and dissemination. A misleading or outright fake news story can get forwarded on Facebook a million times before Snopes.com can even write up their rebuttal (no, oral sex does not prevent breast cancer). Since the rise of social media, we get more and more of our news from each other, and far, far too many of us aren't asking ourselves the important question: "Is the amazing news I'm about to share even fucking true?

" Because most of the time, we don't need somebody else to debunk these stories for us -- not if we know what to look for. 5 Book Worlds Worth Living In. 10 Books You Should Read Before College. 23 Books You Didn't Read In High School But Actually Should. Junot Diaz Annotates ‘The Brief Wondrous Life of Oscar Wao’ on Poetry Genius. 50 Places Every Literary Fan Should Visit.

If you’re like us, and you hear that you’re in an area that is home to a place that has any little bit of literary historical significance, you have to go and visit it. The proper way to read a book. Storyville: 3 Essential Books You Should Read in Every Major Genre. The Joy of Books. Organizing the Bookcase. The Fantastic Flying Books of Mr Morris Lessmore [OSCAR'S 2012 WINNER™] How To Read a Book. See what your friends are reading. 5 year old reads 875 books.