"There is no 'War on Cops'"; There is a Long-Overdue Conversation About Police Brutality. John Oliver: If you’re poor and need a public defender, you’re probably screwed. “War on Cops” Debunked: Police Killings Lower Since Last Year, in Steady Decl... As a manhunt continues for the killers of an Illinois police officer, certain media outlets are using it to contrive disinformation in the faux political debate of MSM. 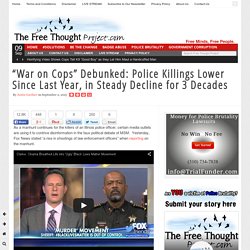 Yesterday, Fox News stated “a rise in shootings of law enforcement officers” when reporting on the manhunt. “War on police” is the new slogan, and no rhetoric is more theatrical than that of Sheriff David Clarke, who is making regular appearances on the infotainment channel. Fox News’ token friend is suggesting there is an epidemic of police killings spurred by Obama’s war on police. NYPD Officer Brian Moore - Just Another Dead Gun Grabber. Apparently, it’s a crime to adjust your belt in Queens now, because that’s why NYPD Officer Brian Moore approached Demetrius Blackwell on Saturday. 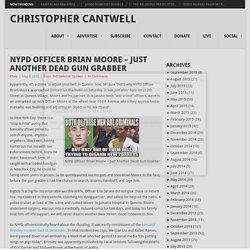 It was just after 6pm on 212th Street in Queens Village. Moore and his partner, Erik Jansen, both “anti-crime” officers, were in an unmarked car with Officer Moore at the wheel near 104th Avenue when they approached a man who was “walking and adjusting an object in his waistband”. NYPD Officer Brian Moore – Just Another Dead Gun Grabber In New York City, there is a “stop & frisk” policy that basically allows police to search anyone, anytime, anywhere.

Local Police Dept. Produces Video: How To Get Pulled Over Like A Good, Obedie... By Casey Harper – Traffic stops have become a source of tension and violence between police and citizens, with multiple deaths in recent weeks. 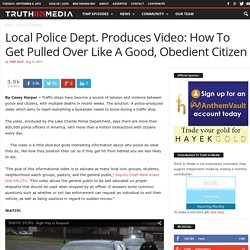 The solution: A police-produced video which aims to teach everything a bystander needs to know during a traffic stop. The video, produced by the Lake Charles Police Department, says there are more than 800,000 police officers in America, with more than a million interactions with citizens every day. M.dailykos. Police Brutality Compilation ~ Rage Against The Machine. The Truth about Police Violence Against Minorities, What #BlackLivesMatter is... On a daily basis, we hear about how if the #BlackLivesMatter movement really cared about black lives then they would say something about the black on black crime in poverty-stricken neighborhoods across the United States. 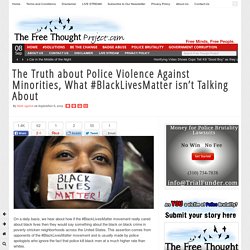 This assertion comes from opponents of the #BlackLivesMatter movement and is usually made by police apologists who ignore the fact that police kill black men at a much higher rate than whites. African-Americans make up only 13 percent of the population, yet they are the victims in 26 percent of all police shootings. That is nearly 3 times the rate of whites. The outrage by the #Black Lives Matter movement is founded in statistical evidence which shows that the system inherently and with extreme bias disproportionately targets blacks.

However, these two things, police killing black men and black men killing black men, are not mutually exclusive. Satirical Illustrations Portray How Police Officers From All Over The World “... Police in Azerbaijan Melissa Faithful for Art-Sheep Gunduz Agayev, the cool illustrator and creator of the “Holy Selfie” series, has done it again with a new, provocative set of illustrations depicting police officers from various countries around the world. 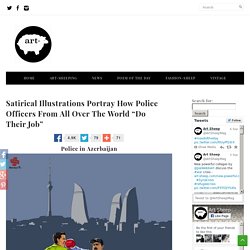 From Russia to Saudi Arabia, Agayev creates a satirical profile of policemen in countries where law is often bended. Charging his characters with features of cruelty and corruption, as common people find in them, Agayev creates an original stereotypical portraiture that satirizes police behavior around the world. Often portrayed as good and decent officers, his subjects show how absurd, funny and sometimes very dangerous, police activity can be.

Police in North Korea. Activists come up with a plan to end police killings. Here it is. Have a plan, she said. 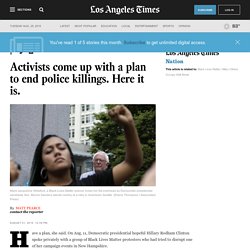 On Aug. 11, Democratic presidential hopeful Hillary Rodham Clinton spoke privately with a group of Black Lives Matter protesters who had tried to disrupt one of her campaign events in New Hampshire. Clinton said raising awareness about inequality would not be enough -- there should be a specific vision to improve the lives of black Americans. If these words and images make you uncomfortable, good #BlackLivesMatter. A Great Injustice — The Message. Police_back.pdf. 30 Reasons Why Saying “Don’t Want to Get Hurt By Cops? Don’t Break the Law” i... ‘Don’t want to get hurt by police? 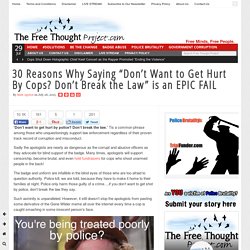 Don’t break the law.’ Tis a common phrase among those who unquestioningly support law enforcement regardless of their proven track record of corruption and misconduct. Sadly the apologists are nearly as dangerous as the corrupt and abusive officers as they advocate for blind support of the badge. Many times, apologists will support censorship, become brutal, and even hold fundraisers for cops who shoot unarmed people in the back!

The badge and uniform are infallible in the blind eyes of those who are too afraid to question authority. Such asininity is unparalleled. Priceonomics. On the evening of January 22, 2002, somewhere in the suburbs of Chico, California, 15-year-old Kristie Priano loaded into the back of the family minivan with her brother and parents. 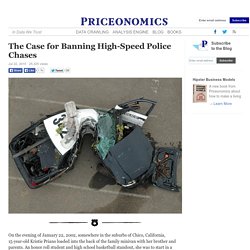 An honor roll student and high school basketball standout, she was to start in a game that night. Around the same time, across town, another teenage girl had just stolen her mother’s Toyota Rav4 to go for a joy ride. Informed of the theft, the local police dispatched several officers to follow the vehicle through residential streets. Initially, the car in pursuit was driving relatively slow — 30 to 35 MPH, according to a police report. Po-Po: Drug Bust. How US Private Prisons Profit from Immigrant Detention. By: Melanie Diaz and Timothy Keen, Research Associates at the Council on Hemispheric Affairs In February 2015, a large-scale prison uprising broke out at the Willacy County Correctional Center in Raymondville, Texas. 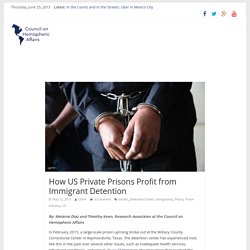 The detention center has experienced riots like this in the past over several other issues, such as inadequate health services, inhumane conditions, and sexual abuse. For-Profit Prisons: Eight Statistics That Show the Problems. As private prisons become the norm in the United States, it's time society takes a look at the institution and asks, "Are prisons really being used as rehabilitation/deterrence for crime, or have private interests started attaching price tags to lawbreakers’ heads and exploited their incarceration for profit? 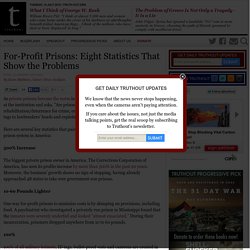 " Here are several key statistics that paint an ugly, troubling picture of the for-profit prison system in America: 500% Increase The biggest private prison owner in America, The Corrections Corporation of America, has seen its profits increase by more than 500% in the past 20 years. Moreover, the business’ growth shows no sign of stopping, having already approached 48 states to take over government-run prisons. 10-60 Pounds Lighter. Understanding America’s Prison System AnonHQ. Rights When the topic of America’s prison system comes up, it can often be overwhelming. There are numerous flaws, and each one seems more crucial than the next so that most often, we don’t even know where to begin. From the effects the American prison system has on society, to the prisoners themselves, it is obvious we have failed. During the 1960’s, the nation’s prison population declined, but by the 70’s, urban crime rates began to rise, and as a result, politicians decided to get “tough on crime.”

They began to focus on locking criminals up for long periods of time rather than rehabilitating them, and drug use was now considered a violation of the law rather than a sickness. As the prison-industrial-complex emerged, struggling communities that were falling apart from deindustrialization began to rely on prisons as a source of jobs and income. In a report by Smart Asset, American taxpayers are paying an estimated $74 billion dollars a year to keep prisons going. Sources: 'Survivor's Guide to America' Pro-Tip: Aggressive Officers - RYOT News. Welcome to Part Two of an ongoing series we are calling the “Survivor’s Guide to America.” I’m a documentary filmmaker who interviewed a large number of formerly incarcerated men over the course of 3 years as well as prison reform advocates, restorative justice mediators and lawyers at the ACLU and Innocence Project. What I found out was that the rate of returning to prison within 5 years is 80%.

This Is What A “Good Cop” Looks Like, Here’s The Video All Cops Should Be Making. In the video, Fields claims that people often tell him that “it’s a bad time to be a cop,” to which he tells them that now is a “perfect time to be a cop.” He then expresses his gratitude towards a movement that has begun to expose the illicit actions of rogue officers across the nation. A courageous Georgia police officer, identified as Billy Ray Fields, has taken a strong stance against the rampant police abuse of authority. In a viral video, originally posted on Mediatakeout, Fields states that he supports the police accountability movement as a means of ridding departments of the bad cops. The clearly frustrated Fields “keeps it professional, but real at the same time,” as he declares his support for the police accountability movement. He says the movement works to expose bad cops, and to hold them accountable for engaging in wrongdoing under the color of authority.

Insecure, Frustrated Bully With Something To Prove Considering Career In Law ... Pepper Spray. This Peaceful Human Innovation has the Days of Brutal Law Enforcement Numbered. Most people in the United States have similar values. We want to care for our family. A Great Injustice — The Message. The Counted: people killed by police in the United States in 2015 – interacti... Think, Don’t Shoot!: Detroit Man Bridges The Security Gap Left By A Failing P... “Commander” Dale Brown is bringing nonviolent conflict resolution training to Detroit, a city where the police department struggles to maintain a basic level of security for what’s left of the city’s dwindling population. Dale Brown of Threat Management Center checks in on an elderly woman in the Boston Edison neighborhood on May 11, 2011.

Bad Cops: Get Ready for your Close Up! Launching the Police Data Initiative. Posted by Megan Smith and Roy L. Here Are 13 Killings by Police Captured on Video in the Past Year. The Police Are Killing One Group at a Staggering Rate, and Nobody Is Talking ... 12 School To Prison Pipeline Facts That Every Person Should Know. P.C. Hipsta.