Federal Assault Weapons Ban. The ten-year ban was passed by the U.S. 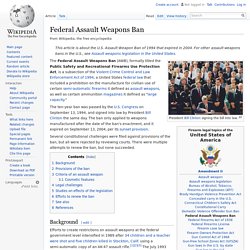 Congress on September 13, 1994, and signed into law by President Bill Clinton the same day. The ban only applied to weapons manufactured after the date of the ban's enactment, and it expired on September 13, 2004, per its sunset provision. Several constitutional challenges were filed against provisions of the ban, but all were rejected by reviewing courts. There were multiple attempts to renew the ban, but none succeeded. United States Department of Homeland Security. The United States Department of Homeland Security (DHS) is a cabinet department of the United States federal government, created in response to the September 11 attacks, and with the primary responsibilities of protecting the territory of the United States and protectorates from and responding to terrorist attacks, man-made accidents, and natural disasters. 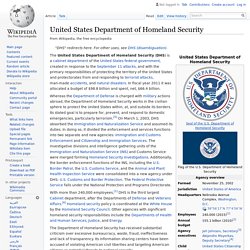 In fiscal year 2011 it was allocated a budget of $98.8 billion and spent, net, $66.4 billion. Home Office. It continues to be known, especially in official papers and when referred to in Parliament, as the Home Department.[2] Organisation[edit] 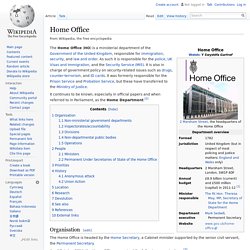 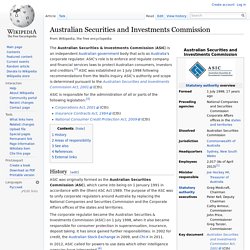 ASIC's role is to enforce and regulate company and financial services laws to protect Australian consumers, investors and creditors.[2] ASIC was established on 1 July 1998 following recommendations from the Wallis Inquiry. Glock. Despite initial resistance from the market to accept a "plastic gun" due to durability and reliability concerns, and fears that the pistol would be "invisible" to metal detectors in airports, Glock pistols have become the company's most profitable line of products, commanding 65% of the market share of handguns for United States law enforcement agencies as well as supplying numerous national armed forces and security agencies worldwide.[6] Glocks are also popular firearms amongst civilians for recreational/competition shooting, home/self defense and concealed/open carry.[7] History[edit] The company's founder, engineer Gaston Glock, had no experience with firearm design or manufacture at the time their first pistol, the Glock 17, was being prototyped. 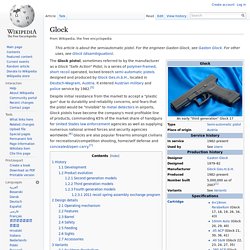 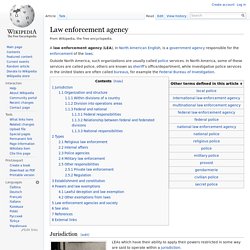 Outside North America, such organizations are usually called police services. In North America, some of these services are called police, others are known as sheriff's office/department, while investigative police services in the United States are often called bureaus, for example the Federal Bureau of Investigation. Jurisdiction[edit] LEAs which have their ability to apply their powers restricted in some way are said to operate within a jurisdiction. Non executive powers jurisdictional coverage of Europol LEAs will have some form of geographic restriction on their ability to apply their powers. Sometimes a LEA’s jurisdiction is determined by the complexity or seriousness of the non compliance with a law. GSG 9. Origins[edit] History and name[edit] Operations[edit] GSG 9 is deployed in cases of hostage-taking, kidnapping, terrorism and extortion. 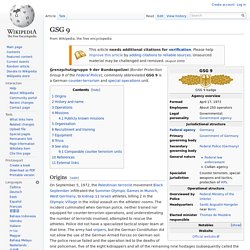 The group may also be used to secure locations, neutralize targets, track down fugitives and sometimes conduct sniper operations. The unit is very active in developing and testing methods and tactics for these missions. From 1972 to 2003 they reportedly completed over 1,500 missions,[1] discharging their weapons on only five occasions. Heckler & Koch UMP. The UMP (Universale Maschinenpistole, German for "Universal Machine Pistol") is a submachine gun developed and manufactured by Heckler & Koch. 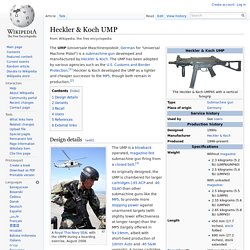 The UMP has been adopted by various agencies such as the U.S. Customs and Border Protection.[1] Heckler & Koch developed the UMP as a lighter and cheaper successor to the MP5, though both remain in production.[2] Design details[edit] The UMP9 (the 9×19mm version of the UMP) is almost 0.2 kilograms (0.44 lb) lighter than its MP5 counterpart.

Its predominantly polymer construction reduces both its weight and the number of parts susceptible to corrosion.[3][4] Variants[edit] The USC or Universal Self-loading Carbine is a semi-automatic version of the UMP that is available to private citizens. Recall[edit] In 2000, H&K recalled certain UMP and USC serial numbers due to faulty operating handles. Royal commision wikipedia australia. National domestic violence order scheme to come within 12 months – Abbott. A national domestic violence order scheme could be up and running within 12 months, after the heads of states and territories made an in-principle commitment to the scheme at Friday’s Council of Australian Governments (Coag) meeting. 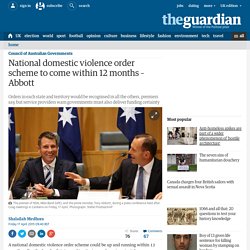 The national scheme would ensure that domestic violence orders in one jurisdiction would be recognised in every state and territory. A legal framework shared between states and territories would be completed before the end of the year, and the prime minister, Tony Abbott, said he would be very disappointed if the scheme was not up and running within 12 months. “In a complex federation, I don’t want anyone to underestimate the logistical difficulties of making [these] kinds of changes,” Abbott told reporters on Friday, adding that getting systems in place across the country was time-consuming.

“There’s quite a degree of logistics in all of this, but we’ll get on with it as quickly as we can.” “This is a community issue,” she said. Domestic violence australia 2014. Law effected by the internet. National University of Criminal And Security Sciences. Criminology. Criminology (from Latin crīmen, "accusation"; and Greek -λογία, -logia) is the scientific study of the nature, extent, management, causes, control, consequences, and prevention of criminal behavior, both on the individual and social levels. 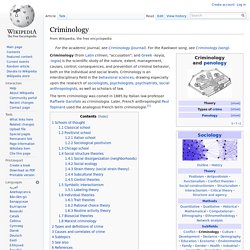 Criminology is an interdisciplinary field in the behavioral sciences, drawing especially upon the research of sociologists, psychologists, psychiatrists, social anthropologists, as well as scholars of law. The term criminology was coined in 1885 by Italian law professor Raffaele Garofalo as criminologia. Later, French anthropologist Paul Topinard used the analogous French term criminologie.[1] Dozens arrested in cybercrime 'strike week' 6 March 2015Last updated at 07:23 ET One raid led to the arrest of a man thought to be involved with an attack on Yahoo in 2012 The UK's National Crime Agency has arrested 56 suspected hackers as part of a "strike week" against cybercrime. In total, 25 separate operations were carried out across England, Scotland and Wales. Those arrested are suspected of being involved in a wide variety of cybercrimes including data theft, fraud and virus writing.

The Hawke cabinet approved guidelines for the Australian Security Intelligence Organisation to spy on Australians to gather foreign intelligence, newly released cabinet documents have revealed. New Zealand Police. The New Zealand Police (Māori: Ngā Pirihimana o Aotearoa, lit. The Policemen of New Zealand) is the national police force of New Zealand, responsible for enforcing criminal law, enhancing public safety, maintaining order and keeping the peace throughout New Zealand. With over 11,000 staff it is the largest law enforcement agency in New Zealand and, with few exceptions, has primary jurisdiction over the majority of New Zealand criminal law. The New Zealand police also has responsibility for traffic and commercial vehicle enforcement as well as other key responsibilities including protection of dignitaries, firearms licensing and matters of national security.

The current Minister of Police is Michael Woodhouse. Secret Intelligence Service. It is frequently referred to by the name MI6 (Military Intelligence, Section 6), a name used as a flag of convenience during the First World War when it was known by many names.[2] The existence of MI6 was not officially acknowledged until 1994.[3] In late 2010, the head of SIS delivered what he said was the first public address by a serving chief of the agency in its 101-year history. The remarks of Sir John Sawers primarily focused on the relationship between the need for secrecy and the goal of maintaining security within Britain.

His remarks acknowledged the tensions caused by secrecy in an era of leaks and pressure for ever-greater disclosure.[4] Asic. John Howard questions Coalition's two royal commissions. John Howard has questioned the Coalition’s decision to launch two royal commissions in its first year in government, saying that the process shouldn’t be used for “narrow targeted political purposes”. A royal commission into the home insulation scheme has already concluded, while another royal commission, into unions, is underway. Howard told the Australian: “I’m uneasy about the idea of having royal commissions or inquiries into essentially a political decision on which the public has already delivered a verdict. “I don’t think you should ever begin to go down the American path of using the law for narrow targeted political purposes.

I think the special prosecutions in the US are appalling.” Four young men died during work provided by the home insulation scheme in 2009 and 2010. Garda Emergency Response Unit. Hostage Rescue Team. The Doughnut. Government Communications Headquarters. GCHQ was originally established after the First World War as the Government Code and Cypher School (GC&CS) and was known under that name until 1946.