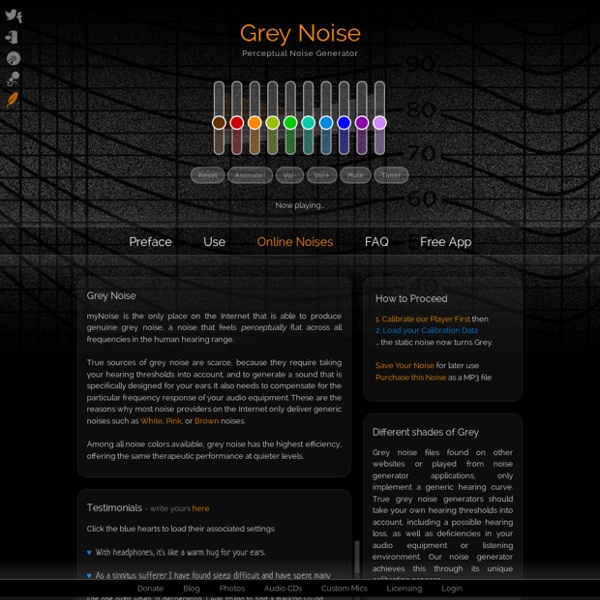 ♥ With headphones, it's like a warm hug for your ears. ♥ As a tinnitus sufferer I have found sleep difficult and have spent many long tedious nights lying awake without relief. Then I happened upon your site one night when, in desperation, I was trying to find a masking sound that would help me get some rest. To be able to customise a sound that actually works for me has been bliss. I now call my personal sound my 'Velvet Lullaby' and it is wonderful. ♥ I love putting this on underneath my mp3's - makes the nuances of certain songs sound crystal clear. ♥ I've been having trouble focusing on math work, but playing this noise is the background has helped me a lot! ♥ This noise helps me in all my activities, whether I'm trying to sleep or have a case of writers block, I can always find the noise I need! ♥ This is great! ♥ It's a windy day outside... ♥ It sounds just like Yellowstone falls, in the national park. ♥ Beautiful ♥ Makes studying geography a lot easier! ♥ Tranquil... ♥ Awesome!

Related:  Fabulous Odds and Ends, Bits of Rope • mind and music • love this

A Rope Ladder There are several types of rope ladders that can be made. I remember using one as a kid, that someone set up to climb a tree overhanging a lake, with another rope tied further out on a branch to be swung from out and over the water. I've seen some use flat wood planks or round pole sections, others may just be knots spaced along a length of rope. Not everyone can manage climbing a knotted length of rope, but having rungs makes a rope ladder easier to 'navigate' for most. This type of ladder also makes it easier to get back into a boat from the water and has also been called a 'knotted bathing ladder'. I chose to make this simple one that can be found in various knot books, including 'The Morrow Guide to Knots'.

Speed Up Your Hearing We surf the net with our eyes, ears and fingers. Eyes offer the largest conduit and while podcasting and audio books just use ears, the ears are best suited for hands-free operation. In addition -- a big plus -- we think better when active because more blood gets to our heads. Also, listening at faster speeds causes a listener to focus more intently on what's being said. Listening at normal speed is then like watching football played at a walking pace.

CelebrAsian 2016 Schedule — Viking Theatre, Grand View University 2411 East 14th, Des Moines, IA Shakuntala, tells the story of a young woman, Shakuntala, who is raised in a secluded sanctuary and falls in love with a monarch, King Dushyanta, whom she meets in the forest. Kalidasa is regarded as the greatest Sanskrit poet and dramatist and Shakuntala is considered his masterpiece. In 1789, it became the first Indian play to be translated into a western language. Shakuntala’s love story has endured through the ages, spreading through Europe and other continents, with adaptations in various languages as dance/dramas and operas – traditional and contemporary. Communicating About Sex: 10 Commandments, Twice « Sexual Intelligence People are always asking me about sexual communication–how to do it, when to do it, where to do it. If I only have 60 seconds (radio talk show, stranger on a bicycle), I mostly respond with some version of “just do it in whatever way feels comfortable—as long as it works.” If you have a few minutes right now, we can look at sexual communication in some detail. It starts BEFORE you’re in bed, so here are some Tips for Communicating about Sex In the Kitchen (or Wherever): * Sit close enough to touch when you talk.

100 Greatest Beatles Songs By Elvis Costello I first heard of the Beatles when I was nine years old. I spent most of my holidays on Merseyside then, and a local girl gave me a bad publicity shot of them with their names scrawled on the back. This was 1962 or '63, before they came to America. Schools Need Introverted Teachers, But Avoiding Burnout a Challenge It’s generally believed that the teaching profession is better suited to extroverts. While hugely rewarding, it is exceptionally demanding, noisy, chaotic and educators are always under the microscope. But there are many introverted teachers across the country, who, as a recent article in The Atlantic concluded, are more vulnerable to burnout than their extroverted colleagues. Jessica Honard agrees. A self-described introvert, Honard left the classroom after five years after she reluctantly concluded that the relentless daily pressure eclipsed what she loved about teaching high school English.

Breath control: Safety - Wipipedia Breath control is the process of limiting or restricting air and/or the supply of oxygen to the brain. Cautionary essay THE MEDICAL REALITIES OF BREATH CONTROL PLAY by Jay Wiseman, author of "SM 101: A Realistic Introduction" For some time now, I have felt that the practices of suffocation and/or strangulation done in an erotic context (generically known as breath control play; more properly known as asphyxiophilia) were in fact far more dangerous than they are generally perceived to be. As a person with years of medical education and experience, I know of no way whatsoever that either suffocation or strangulation can be done in a way that does not intrinsically put the recipient at risk of cardiac arrest.

Science Explains How Staying Near Water Can Change Our Brains By Jenny Marchal | Lifehack Have you ever felt at peace when you’re walking by the ocean? A sense of rejuvenation when you stand by a waterfall? How about taking in the view of a breathtaking lake from your window? We can often report feeling a sense of calm when we’re around water and scientists say, this is having a positive effect on our brains. So what exactly is happening to our brains when we surround ourselves with water?