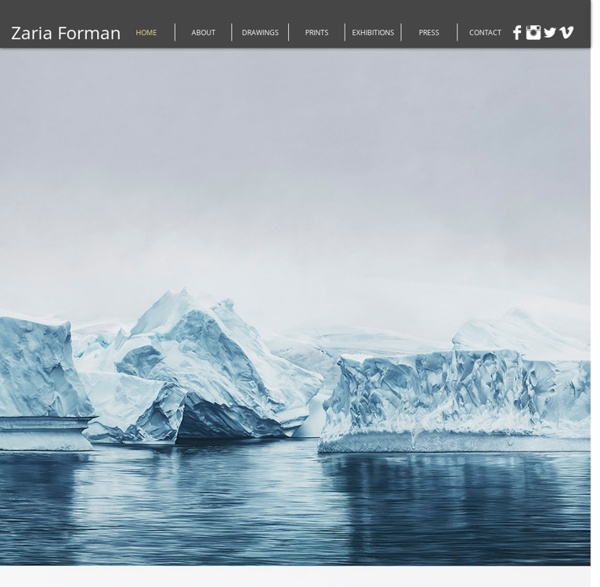 You Will Never Guess What These Sculptures Are Made Of – The Awesome Daily - Your daily dose of awesome Home / Art / You Will Never Guess What These Sculptures Are Made Of This is Haroshi. He is a self made artist who loves to create amazing sculptures and skate One day he had the genius idea of combining the two things he love the most in the world So he started to create these awesome sculptures out of…you guessed it.. Skateboards ! The Mesmerizing Gifs of Graphonaute Science student Hugo Germain (aka. Graphonaute) is just 18 years old, but crates animations and visual effects that seem well beyond his years. Though animation is not his primary focus, Germain spends his spare time mixing live action footage with various 3D tools to create quirky visual effects and experiments.

New 3D Calligraphy Experiments by Tolga Girgin Turkish graphic designer and electrical engineer Tolga Girgin continues to experiment with calligraphy that seems to jump off the page. Girgin uses shading, shadows, and different forms of perspective to create three-dimensional letters that float, stand, drip, and slant. You can see more on Instagram and over on Behance. (via Lustik) Hassan Hajjaj - Artists - Taymour Grahne Born in Larache, Morocco, in 1961, Hassan Hajjaj left Morocco for London at an early age. Heavily influence by the club, hip-hop, and reggae scenes of London as well as by his North African heritage, Hajjaj is a self-taught and thoroughly versatile artist whose work includes portraiture, installation, performance, fashion, and interior design, including furniture made from recycled utilitarian objects from North Africa, such as upturned Coca-Cola crates as stools and aluminum cans turned into lamps. Turning to photography in the late 80s, Hajjaj is a master portraitist, taking studio portraits of friends, musicians, and artists, as well as strangers from the streets of Marrakech, often wearing clothes designed by the artist. past exhibition 28 January - 8 March 2014 Press

Sci Fi Concepts - Bearfootfilms Sci Fi Concepts Concept Designs for Future Things All the 3D Elements are created in Lightwave 3d and then painted over and tweaked in Photoshop. Rebuild Hangar Body Painting by Craig Tracy Article by James Pond I am the owner of Pondly.com / art lover / electrical engineer / software developer / MBA in e-business student. I blog for pleasure and love to share my Internet findings. Web site: Body painting is form of art in which Craig Tracy excels. Shapes of models’ bodies are an inspiration for this artist who was born and raised in New Orleans, Louisiana.

carnovsky RGB Color est e pluribus unus RGB is a work about the exploration of the “surface’s deepness”. RGB designs create surfaces that mutate and interact with different chromatic stimulus. Carnovsky's RGB is an ongoing project that experiments with the interaction between printed and light colours. PichiAvo New Pieces - Werchter, Belgium PichiAvo are now in Belgium where they were invited to paint for the North West Walls Street Art Festival in Werchter. The Valencia-based street art duo quickly worked their magic through this series of large pieces showing some of their trademark greek statues against a graffiti background that really pops. Reconvene after the jump for more images on these pieces and then drop your two cents down in our comments section.

25 Of The Most Creative Sculptures And Statues From Around The World Our cities are full of majestic monuments, unexpected sculptures and artistic statues, each having a story to tell. Thousands of them have been made but only a few of them are really extraordinary and picture-worthy. That’s why our readers set out to find the world’s most creative statues and sculptures, which add color and emotion to the most boring areas of the cities. For the last two weeks, bored pandas from around the globe have been submitting their pictures of the best sculptures here. We have received more than 160 pictures and hundreds of votes which resulted in this awesome list.