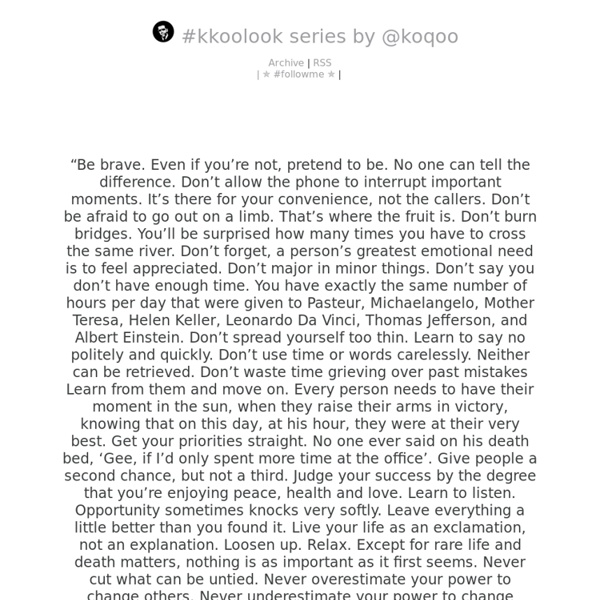 25 Beautifully Illustrated Thought-Provoking Questions 405 Flares Facebook 137 Twitter 5 Google+ 194 StumbleUpon 1 Pin It Share 68 68 405 Flares × A question that makes you think is worth asking… At the cusp of a new day, week, month, or year, most of us take a little time to reflect on our lives by looking back over the past and ahead into the future. We ponder the successes, failures and standout events that are slowly scripting our life’s story. This process of self reflection helps us maintain a conscious awareness of where we’ve been and where we intend to go.

20 more awesomely untranslatable words from around the world If only you could use these words in Scrabble. Photo: Jeremy Mates When linguists refer to “untranslatable” words, the idea is not that a word cannot somehow be explained in another language, but that part of the essence of the word is lost as it crosses from one language to another. This often is due to different social and cultural contexts that have shaped how the word is used. 40 Ways to Feel More Alive “I don’t believe people are looking for the meaning of life as much as they are looking for the experience of being alive.” ~Joseph Campbell As I write this, I am two hours away from my first weekly acting class in Los Angeles. I’ve been here for almost two years now, and though I loved Community Theater as a kid, I never so much as researched acting classes until a couple weeks back.

25 Handy Words That Simply Don’t Exist In English Approximately 375 million people speak English as their first language, in fact it's the 3rd most commonly spoken language in the world (after Mandarin Chinese and Spanish). Interestingly enough it's the number 1 second language used worldwide - which is why the total number of people who speak English, outnumber those of any other. But whilst it's the most widely spoken language, there's still a few areas it falls down on (strange and bizarre punctuation rules aside). We look at 25 words that simply don't exist in the English language (and yet after reading this list, you'll wish they did!) 1 Age-otori (Japanese): To look worse after a haircut 2 Arigata-meiwaku (Japanese): An act someone does for you that you didn’t want to have them do and tried to avoid having them do, but they went ahead anyway, determined to do you a favor, and then things went wrong and caused you a lot of trouble, yet in the end social conventions required you to express gratitude

7 Basic Things You Won't Believe You're All Doing Wrong If you're like us, you might sometimes have a problem with complex tasks, like trying to drive an ambulance and send a text message at the same time. But hey, at least most of us have figured out the simplest things that get us through the day, right? Except, you know, some of the simple things we've done every day of our lives, like ... 15 timeless observations from history's greatest dystopian novels The dystopian novel has a long, dark and intriguing history. Kicking off in 1726 with Jonathan Swift’s rip-roaring satire Gulliver’s Travels, it’s gone through numerous transformations in the last three centuries. One thing all these books share, though, is that they make us think long and hard about the societies we live in. Evolving not simply as a response to fictional utopian concerns, but also as a response to the prevalent or ominous ideals and politics of the writer’s time, the dystopian novel tends to use its make-believe guise as a front to critique the ideologies under which they’ve been forged.

More Sex Transmutation Q&A GENIUS HOME - Reader's Creative Thinking Questions : Sex Transmutation Q&A 2 ... Answering more of your questions on practical sex transmutation Brian wrote to me recently asking me for greater clarity on the practice of Sex Transmutation. Famous Quotes are Paired with Clever Illustrations Kuala Lumpur, Malaysia-based illustrator Tang Yau Hoong has just released a brand new series where he pairs one of his older illustrations with a famous quote. A few years ago, we discovered Hoong and we quickly became fans after we saw his ability to cleverly incorporate negative space into many of his works. As he told us then, "I enjoy making illusion art because it has the ability to mislead us. We rely on sight in our lives and yet it is so fragile that we could easily be deceived by what we see."

Wabi-Sabi: Translating the Beauty in Imperfection Wabi-sabi. It’s a concept, an aesthetic, and a worldview. It’s also a phrase that doesn’t translate directly from Japanese into English, and the ideas behind it may not immediately translate in the minds of those who haven’t encountered it before. Put simply, it’s an intuitive way of living that emphasizes finding beauty in imperfection, and accepting the natural cycle of growth and decay. The best way to learn about wabi-sabi is just to accept that it’s there – and to begin noticing examples of it in one’s daily life. The words wabi and sabi were not always linked, and they can still be used separately in the Japanese language.

How I Changed My Life, In Four Lines ‘What saves a man is to take a step. Then another step.’ ~C. S. Lewis By Leo Babauta Famous ENFPs Hunter S. Thompson Journalist, author of 'Fear and Loathing in Las Vegas'