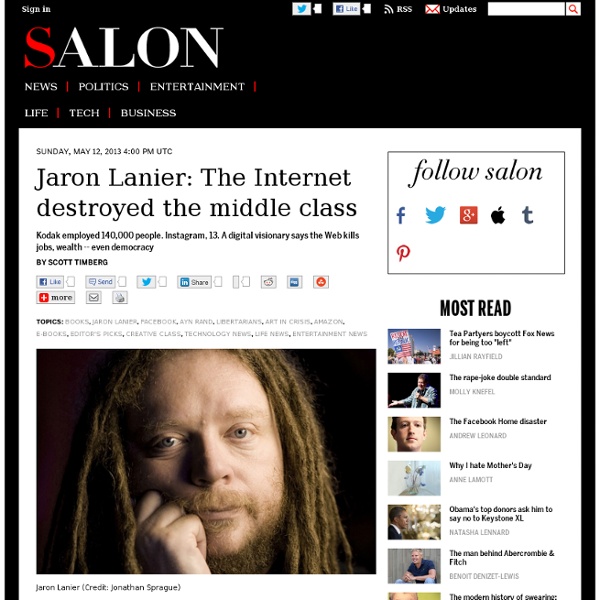 Jaron Lanier is a computer science pioneer who has grown gradually disenchanted with the online world since his early days popularizing the idea of virtual reality. “Lanier is often described as ‘visionary,’ ” Jennifer Kahn wrote in a 2011 New Yorker profile, “a word that manages to convey both a capacity for mercurial insight and a lack of practical job skills.” Raised mostly in Texas and New Mexico by bohemian parents who’d escaped anti-Semitic violence in Europe, he’s been a young disciple of Richard Feynman, an employee at Atari, a scholar at Columbia, a visiting artist at New York University, and a columnist for Discover magazine. He’s also a longtime composer and musician, and a collector of antique and archaic instruments, many of them Asian. His book continues his war on digital utopianism and his assertion of humanist and individualistic values in a hive-mind world. This week sees the publication of “Who Owns the Future? You talk early in “Who Owns the Future?” Right. Right. Related:  Economic Theory and Bits

The Enlightenment of Charles Manson I was listening to the clip Matt Staggs posted on here the other day of Alan Watts expounding on the Buddhist concept of “No Self” so I clicked on it in YouTube to see what else came up, and there I found this little clip of Charles Manson answering the question of “Who are you?” After listening to Watts, Manson’s answer struck me as profound. “I am nobody”, was his answer, basically. I had seen other Manson interviews. I particularly like the one with Geraldo Rivera. I clicked on some more links and discovered an interview of Manson being interviewed by Charlie Rose, one I hadn’t seen before. I am struck by how confidently Manson, who appears to be just over 5 feet tall, walks into the room in comparison to the three enormous correctional officers who accompany him, all ow home appear to be slightly nervous to be on TV. Rose: Do you have friends you can talk to? Rose seems to establish early on a pattern of steering the conversation continually from the interesting to the banal:

The State, the Deep State, and the Wall Street Overworld In the last decade it has become more and more obvious that we have in America today what the journalists Dana Priest and William Arkin have called two governments: the one its citizens were familiar with, operated more or less in the open: the other a parallel top secret government whose parts had mushroomed in less than a decade into a gigantic, sprawling universe of its own, visible to only a carefully vetted cadre – and its entirety…visible only to God.1 And in 2013, particularly after the military return to power in Egypt, more and more authors referred to this second level as America’s “deep state.”2 Here for example is the Republican analyst Mike Lofgren: There is the visible government situated around the Mall in Washington, and then there is another, more shadowy, more indefinable government that is not explained in Civics 101 or observable to tourists at the White House or the Capitol. DEEP STATE n. The Deep State, The Shadow Government and the Wall Street Overworld Thereafter

Freedom to Tinker — Research and expert commentary on digital technologies in public life Job security is a thing of the past - so millions need a better welfare system | Guy Standing | Comment is free So, millions of British workers are anxious and frustrated. Is anybody surprised at the precariousness revealed by the latest Skills and Employment Survey, published on Monday? The national survey, carried out every six years, shows that more employees feel insecure than at any time in 20 years; that work is being intensified, with people being asked to do more and work longer; and that for the first time people working in the public sector feel more insecure than those in the private sector. The reasons for this are clear. All governments since Margaret Thatcher's have promoted flexible labour markets as the right response to globalisation, without radically altering the social protection system in order to cushion workers against the inevitable insecurities that arise. As long as this consensus prevails, more and more people will join the ranks of the "precariat", and the insecurities confronting people will continue to multiply and intensify. Britain is not alone, of course.

Jeremy Scahill and Noam Chomsky: The Truth About America's Secret, Dirty Wars May 16, 2013 | Like this article? Join our email list: Stay up to date with the latest headlines via email. The following is taken from a transcript of a special event featuring Jeremy Scahill and Noam Chomsky with Amy Goodman hosted by the Carr Center for Human Rights Policy at the Harvard Kennedy School, the ACLU of Massachusetts, the American Friends Service Committee of Massachusetts, the Cambridge Peace Commission and the Community Church of Boston that was broadcast by Democracy Now!. The event covered the subjects explored in Scahill's new book, Dirty Wars. Jeremy Scahill: I’m really honored to be here with both Amy Goodman and Noam Chomsky. And I like to think of the footnotes in my book as a tribute to Professor Chomsky, because one of the first things I do when I look at a book is to check out the notes in the index to see how serious the book is, how serious the author was about citing every fact that he states in the book.

The Rise of Anti-Capitalism Photo WE are beginning to witness a paradox at the heart of capitalism, one that has propelled it to greatness but is now threatening its future: The inherent dynamism of competitive markets is bringing costs so far down that many goods and services are becoming nearly free, abundant, and no longer subject to market forces. While economists have always welcomed a reduction in marginal cost, they never anticipated the possibility of a technological revolution that might bring those costs to near zero. The first inkling of the paradox came in 1999 when Napster, the music service, developed a network enabling millions of people to share music without paying the producers and artists, wreaking havoc on the music industry. The huge reduction in marginal cost shook those industries and is now beginning to reshape energy, manufacturing and education. Now the phenomenon is about to affect the whole economy.

Young, qualified and jobless: plight of Europe's best-educated generation | World news "All your life," says Argyro Paraskeva, "you've been told you're a golden prince. The future awaits: it's bright, it's yours. You have a degree! You'll have a good job, a fine life. Or not so suddenly. Over cold tea in a sunlit cafe in Greece's second city, Paraskeva says she has written "literally hundreds of letters". So would countless other young Europeans. European leaders are rarely without a new initiative. Some commentators say the figures overstate the problem: young people in full-time education or training (a large proportion, obviously) are not considered "economically active" and so in some countries are counted as unemployed. But others point out Europe's "economically inactive" now include millions of young people (14 million, according to the French president, François Hollande) not in work, education or training but who, while technically not unemployed, are nonetheless jobless – and have all but given up looking, at least in their own country. He's not making money.

Cornel West: “You can get killed out here trying to tell the truth!” This article originally appeared on AlterNet . As big banks and corporations grab more power and government heightens control and surveillance, confronting those at the top is getting to be a dangerous proposition. As Cornel West put it bluntly, “You can get killed out here trying to tell the truth.” For the last year, a partnership between the Institute for New Economic Thinking (INET), a New York–based think tank, and Union Theological Seminary (UTS) has produced a series of rich conversations about economics, society and the human spirit. Johnson, who had recently led a meeting of major financial executives in London, noted that the Big Boys are aware that they are no longer gods in the public view, but demons. West cited the need for a “democratic counterweight” against what he described as three dominant tendencies on the globe: “financializing, privatizing and militarizing.” West sent a powerful message about governments harassing and exerting control over citizens.