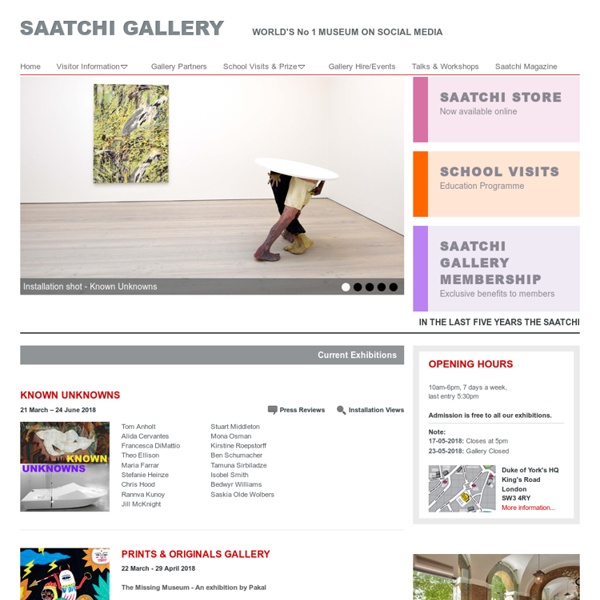 The Little Black Jacket 12 October - 4 November 2012 CHANEL's photographic exhibition dedicated to Karl Lagerfeld's latest book, 'The Little Black Jacket: CHANEL's classic revisited by Karl Lagerfeld and Carine Roitfeld', will open at the Saatchi Gallery in London in October. The public will discover the versatility and timelessness of the iconic CHANEL jacket through Karl Lagerfeld's 113 photographs, modelled on a range of friends of the House, with each personality adapting the garment to reflect their own inimitable style - worn as a cape on singer Lily Allen, draped around model Stella Tennant, or even transformed into a vest on model Edie Campbell.

The Clash The Clash's politicised lyrics, musical experimentation, promotion of DIY ethics and rebellious attitude had a far-reaching influence on rock, alternative rock in particular.[2] They became widely referred to as "The Only Band That Matters", originally a promotional slogan introduced by the group's record label, CBS. In January 2003, the band—including original drummer Terry Chimes—were inducted into the Rock and Roll Hall of Fame. In 2004, Rolling Stone ranked the Clash number 28 on their list of the 100 greatest artists of all time.[3] History[edit] 50 Really Cool Online Tools for Science Teachers Science Tools to Use with Students These tools offer opportunities for learning about climate, cells, the human body, nature, and more. ChemiCool. Share this periodic table with your class for an easy to use tool with information on each of the specific elements.GPS Activities and Lesson Plans.

Art - Sweet Station Paul Kaptein ” My work is broadly concerned with the agency of the present moment. By sampling various cultural and temporal trajectories, I’m exploring the notion of the now as a remix of past and future potentialities. This facilitates a renegotiation of perceptual truths resulting in an expression of things not quite truth, yet not quite fiction. The Ten Golden Rules – Lomography Every second is special for you and your LOMO LC-A; every moment is monumental! When you are Lomographing, you're not only living your life at the present with more intensity and excitement, but you're also conserving the present for your future. All with the help of your bright, dark, moody, blurred, sharp, colourful, grey, indefinable, straightforward, romantic and fully packed Lomographs! Your feelings, your memory and your Lomographs; they all mix up to a new, complete, more authentic view and perception of yourself and your life.

DUBSTEP !!!! : WE LOVE DUBSTEP Dubstep is a genre of electronic dance music which has its roots in London 's early 2000s UK garage scene. The genre's name was coined by Ammunition Promotions. Musically, dubstep is distinguished by its dark mood, sparse rhythms, and emphasis on bass . Dubstep started to spread beyond small local scenes in late 2005 and early 2006, with many websites devoted to the genre appearing on the internet and thus aiding the growth of the scene, such as dubstepforum, the download site Barefiles and blogs such as gutterbreakz. [1] Simultaneously, the genre was receiving extensive coverage in music magazines such as The Wire and online publications such as Pitchfork Media .

Nine Points Magazine Fine Distinctions - Fours - Tom Condon Subtypes Self-Preservation Fours • Self-Preservation Fours are often risk takers • They take chances to stir up emotional intensity, collect new experiences, play out inner dramas or learn about themselves • Open advocates of the passionate life • Social and artistic courage; the high side of this subtype brings daring Consciousness and Practice: The Holy Ideas - Ron Esposito The Enneagram is a powerful tool for self-observation and a way for me to observe how I think, feel and behave as well as my underlying motivations. Via Chicago Pt. 2 Let's talk about Post-Rock; Coined by music critic Simon Reynolds in 1994, the term post-rock was initially used as a means to describe music which used typical rock instruments to make very non-rock music. It's a meaningfully ambiguous term that can be used to describe everything from Mogwai, to Slint, to Godspeed You Black Emperor. At it's best post-rock is used to describe those groups who had a penchant for deconstructing typical rock forms, while still keeping one foot in the genre (see The For Carnation, Him, or Do Make Say Think). At it's worst, post-rock was just a cooler way for saying Prog (see that band I tend to criticize too much, even though I really like Tyondai and "Atlas").

The 4 Ways You Can Use Body Language To Influence Success If you see someone frowning, head bowed, shoulders slumped, it’s a fair bet they’re feeling low in confidence. But which came first: the slumped shoulders or the bad mood? Your body language doesn’t merely reflect your emotions, it’s often the cause. February 2005 Well, Im back after a 2 day vacation that resembled a tumbling fall down the mortal coil. Day's off from work tend to fuck me up a litte. I let my self oversleep and do nothing productive, wake up at wierd times then I don't sleep when i should. What happends is I get to that point where I should sleep, and I don't do anything, because "I'm about to go to sleep, I need go to sleep". Then when I manage to get to sleep, I only get like 3 hours or less, I got 45 mins yesterday. So Im fucking tired all day.

18 Ways to Improve Your Body Language There is no specific advice on how to use your body language. What you do might be interpreted in several ways, depending on the setting and who you are talking to. You’ll probably want to use your body language differently when talking to your boss compared to when you talk to a girl/guy you’re interested in. THRILL JOCKEY CELEBRATES 15 YEARS WITH BOX SET Fifteen years ago, Thrill Jockey Records was founded on the Lower East Side of New York City. In other words, it was 1992, so Thrill Jockey did as many new labels of those days did and released a number of 7" singles, with now-familiar names like Tortoise and Freakwater, and some now-less-familiar early Thrillers like Sugarshock and Gorilla. In the fifteen years since 1992, the 7" singles have been fewer and farther between, but with some definite gems from time to time.

Body Language of the Hands “Among all species, our human hands are unique -- not only in what they can accomplish, but also in how they communicate. Human hands can paint the Sistine Chapel, pluck a guitar, maneuver surgical instruments, chisel a David, forge steel, and write poetry. They can grasp, scratch, poke, punch, feel, sense, evaluate, hold and mold the world around us.