7 Movies That Put Insane Detail into Stuff You Never Noticed 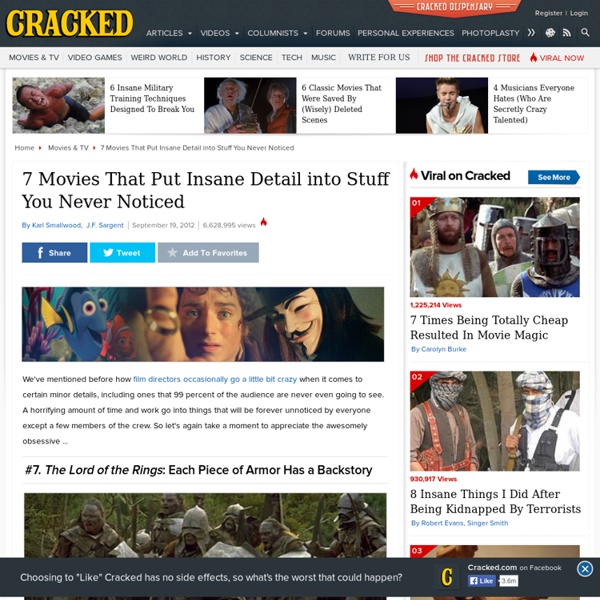 We've mentioned before how film directors occasionally go a little bit crazy when it comes to certain minor details, including ones that 99 percent of the audience are never even going to see. A horrifying amount of time and work go into things that will be forever unnoticed by everyone except a few members of the crew. So let's again take a moment to appreciate the awesomely obsessive ... #7. The Lord of the Rings: Each Piece of Armor Has a Backstory For any sci-fi or fantasy film, it's one thing to make the clothing and equipment look authentic onscreen, and another to add layers of detail that are physically impossible to notice, even if each frame of the movie is examined with a magnifying glass. If Michael Bay had directed this film, all those Uruk-hai would be explosions, and Helm's Deep would be a pair of tits. What's that? KropserkelEven that codpiece is Orc-accurate. ... pinched finger by pinched finger ... ... working for two straight years, without stopping. CollectTolkien #6.

SAF to retire!! “My greatest challenge is not what’s happening at the moment, my greatest challenge was knocking Liverpool right off their perch.” Ferguson on his biggest achievement “At the end of this game, the European Cup will be only six feet away from you and you’ll not even able to touch it if we lose. And for many of you that will be the closest you will ever get. Don’t you dare come back in here without giving your all.”

The 32 Greatest Unscripted Movie Scenes Much to the dismay of screenwriters, movies scripts aren’t always set in stone. They are often like living objects constantly evolving during the filming process. Some films, like Jaws and Annie Hall, don’t even have a finished script when the cameras start to roll. Actors and actresses are regularly ad libbing, improvising or going off-script while reciting their lines. Sometimes the directors hate it – other times they love it. Occasionally the improved lines become immortalized as some of the most memorable in cinema history.

23 Best Movies On Netflix You Haven’t Yet Seen (Updated) Having only made its way to the U.S. 6 long years after its initial release, this is the long-awaited film from the Oscar-winning director of A Separation– and it is in every way extraordinary. It’s a movie stripped down of almost everything to keep only its humans in focus, it is honest and realistic beyond belief and quite simply a must-watch. A group of old friends and relatives reunite for vacation in northern Iran with one of them bringing a new person to the group, Elly, in hopes of her marrying one of the friends, Ahmad. When Elly vanishes without notice, the questions that follow expose the group to unexpected levels, and eventually pose subtle yet sincere questions about gender, politics, and the delicate balance modern-day Iranians live in.

Forums - View Single Post - Ankit's Creations[Cricket 13 with Lineup Editor & Graphics Selector] Next Gen Gameplay Patch v 6.0 Features:- i)AI pacing has been made from scratch. ii)Human batting is even more challenging. iii)Introduction Of BluffMarker. iv)All difficulty modes are active(Only ideal zone sizes differ). v)Edges and its occurrence are much more natural. vi)Few fields updated. vii)Stroke Variation has been redone. Note:BluffMarker is a technique by which the CPU sets the bowling marker at a point and then changes it at the last moment making it difficult for the Human to play strokes. Makes the game more challenging. Instructions i)The Cricket07.exe in the root folder SHOULD be of 0 kb.

New Indie Music - Five Albums You Should Be Listening to Right Now, with Royal Bangs, Generationals, Surf City, Mazarin, Aztec Camera This week's curator: Mara Schwartz of Bug Music. By Mara Schwartz Every two weeks, titans of the mediasphere give Nerve their music recommendations. The 30 Best Films of the Decade We’re all in that humanistic mode of evaluating our lives – coming up on the end of the year and the last time a zero will be the third digit on our calendars. We’re all (from Variety to Cat Fancy) also waxing expert on what films were the best of the best of the best of the past ten years. Which is why there is an unnavigable sea of opinion polluting the internet right now.

Requests Off MattW's Overlays [Ten Sports Red Overlay Released! No Requests!] - PlanetCricket Forums Welcome Welcome to my download thread, I focus on making overlays that are as good as possible within the constraints of Cricket 07. PlanetCricket is the only place where I post downloads, if you see them elsewhere, they aren't mine. Tournament/League Overlays and Menus Host Broadcaster/National Team Overlays and Menus Superseded Overlays/MenusNo previews:Blank Overlay - A totally blank overlay that allows you to play the game without any on screen graphics - good for taking preview screenshots of downloads.

25 Spectacular Movies You (Probably) Haven't Seen Midnight in Paris Woody Allen’s latest places starving writer Owen Wilson in Paris with his fiancée, Rachel McAdams. Searching for inspiration for his incomplete novel, Owen begins taking strolls around the city at night where he discovers an unexpected group of people. I wish I could be more specific, but it would ruin the surprise. 25 Spectacular Movies You (Probably) Haven’t Seen Pt. 3 Mr. Nobody Who would you have been when, at crucial moments in your life, you chose to walk a different path?

42nd match: Pune Warriors v Chennai Susu Kings at Pune, Apr 30, 2013 It is not going to be cricket tonight, so let's not talk about cricket. Ladies, gentlemen and CSK fans/trolls, We welcome you today on this deeply sombre occasion where a bunch of wounded warriors will plunder a bunch of hapless chickens ruthlessly. The anticipation of the ruthlessness of this very act has already sent shivers across the society and various animal activist groups have already started protesting against this all over the world.

25 Indie Gems You Can Watch On Netflix Right Now 11. Chop Shop (2007) (Watch on Netflix) The impressive debut of Ramin Bahrani, shows the life of street orphan “Ale” looking for work on the street of Queens, NY. 30 Books I’m Glad I Read Before 30 In various ways, these 30 books convey some of the philosophy of how Angel and I live our lives. I honestly credit a fraction of who I am today to each title. Thus, they have indirectly influenced much of what I write about on this site. A medley of both fiction and nonfiction, these great reads challenged my internal status quo, opening my mind to new ideas and opportunities, and together they gave me a basic framework for living, loving, learning and working successfully. If you haven’t read these books yet, I highly recommend doing so.