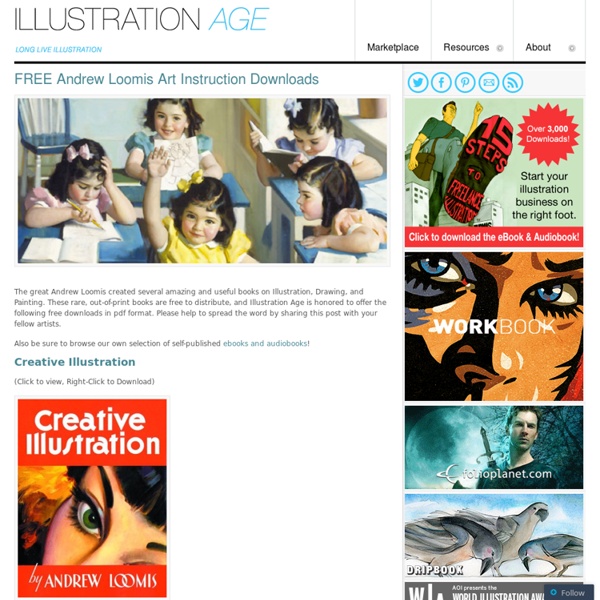 The great Andrew Loomis created several amazing and useful books on Illustration, Drawing, and Painting. These rare, out-of-print books are free to distribute, and Illustration Age is honored to offer the following free downloads in pdf format. Please help to spread the word by sharing this post with your fellow artists. Also be sure to browse our own selection of self-published ebooks and audiobooks! Creative Illustration (Click to view, Right-Click to Download) Drawing The Head & Hands Eye Of The Painter Figure Drawing For All It’s Worth Fun With A Pencil Successful Drawing Also be sure to check out 15 Steps to Freelance Illustration for a step-by-step guide on starting your own freelance Illustration business! Related Introducing the Illustrator's Survival Kit! Ready to supercharge your Illustration business for the new year? In "Stuff" New Book for Illustrators by Bobby Chiu "The Perfect Bait" is a brilliant companion for "15 Steps to Freelance Illustration." In "Editorial"

How to Draw Balanced Poses Premium lesson showing how to exaggerate a pose: How to Draw Exaggerated Poses – Figure Drawing Transcript: Let’s talk about balance! Dazzling Images of the Brain Created by Neuroscientist-Artist The brain has been called the most complex structure in the universe, but it may also be the most beautiful. One artist's work captures both the aesthetics and sophistication of this most enigmatic organ. Greg Dunn earned a PhD in neuroscience before deciding to become a professional artist. "I had been a scientist in my previous life," Dunn said.

Digital Painting In Photoshop: The Magic Box Learn HUNDREDS Of Digital Painting Pro Workflows, Techniques & Time-Savers Step-By-Step! Detail image from my ‘Animal Farm’digital painting for ImagineFX Magazine.[ click to enlarge ] Digital painting is powerful. The various effects and moods you can achieve with Photoshop and a digital tablet now seem infinite. Tutorials – Enliighten Figure Painting – Reclining Female Figure This is a short preview of the Figure Painting – Reclining Female Figure demo. In this section of the demo, Daarken shows his process for painting the face. If you would like to see the full video, please visit his Gumroad. Figure Painting – Female Portrait from Daarken on Vimeo. Creating a Romance Cover – Without Painting

Disturbing (But Amazing) Pictures Expose The Absurdities Of Modern Culture *Warning: Graphic Images* One of my first thoughts after coming across these illustrations was, “How have I never seen this artist’s work before?”, because they are freaking amazing. Too few artists today have the courage to tackle important social commentaries with their art. But Spanish artist Luis Quiles has undoubtedly broken this mold with his series of illustrations that depict some relevant and unfortunate realities of our world today. Through his art, Quiles challenges a wide range of controversial issues ranging from over-the-counter drug addiction, censorship, and corruption, to sexism, violence, child abuse, and most pertinent of all, our cultural social-media-crazed obsession. There is something raw and hauntingly telling about the commentaries being expressed through each illustration, perhaps in part due to the apparent truth that exists in the messages.

Takach Press- Positive Litho Plates Emerald positive working litho plate's finish is more corse than other plates on the market. They hold more ink and water, and can be imaged over a wide range of exposure times. Emerald plate is more responsive to the entire range of values on the gray scale than other lithographic photo printmaking plates. The Motions of Kayaking and Canoeing Recorded through Light Painting on Canadian Waterways Kayaking Canoeing Swimming Ontario-based photographer Stephen Orlando is fascinated with human movement and uses programmable LED light sticks attached to kayak paddles, people, racquets, and other objects to translate that movement into photographic light paintings. The act of recording motion on the surface of water surrounded by reflections creates a surprisingly unique effect, almost sculptural in nature.

Making Art from the War on Terror’s Deadly Paper Trail Rajkamal Kahlon, from ‘Did You Kiss the Dead Body?’ series (2012) (all images courtesy the artist) The response from the art world to the partial release on December 9, 2014 of the Senate Intelligence Committee Report on Torture has so far been scant. Washington Post art and architecture critic Philip Kennicott’s provocative editorial is a rare exception: “Our belief in the national image is astonishingly resilient…” he writes, but “we must learn that the national image is a hollow conceit. What we desperately need is a national conscience.” For the past several years, artists including Rajkamal Kahlon, Jenny Holzer, and Fernando Botero have created major projects centered on US torture, detention, and violence related to the War on Terror.

rajkamalkahon Blowback Blowback is a CIA term, a metaphor for the unintended consequences of covert operations against foreign nations and governments. The project borrows the term to explore the relationship between early anthropological portraiture and modern terrorism. Through these works a relation of causality appears between Western representations of formerly colonized subjects and acts of political retaliation labeled as terrorism today. Turning Eickstadt's Wonder Sense and Sensuality: Art Nouveau 1890-1914 / Exhibitions Sense and Sensuality presents some 65 works drawn from the Arwas Collection, the Anderson Collection of Art Nouveau (already in the Sainsbury Centre holdings), and from various other private collections. Following on from the 2012 exhibition, The First Moderns: Art Nouveau, from Nature to Abstraction, which focused on Art Nouveau as the forerunner of international Modern design, this exhibition looks at those Art Nouveau designers who were interested in the darker, more complex side of life. The show embraces the sensuality of Art Nouveau, which at times is risqué, and features a wide range of works from sculpture, graphics, and books to ceramics, glass and furniture.