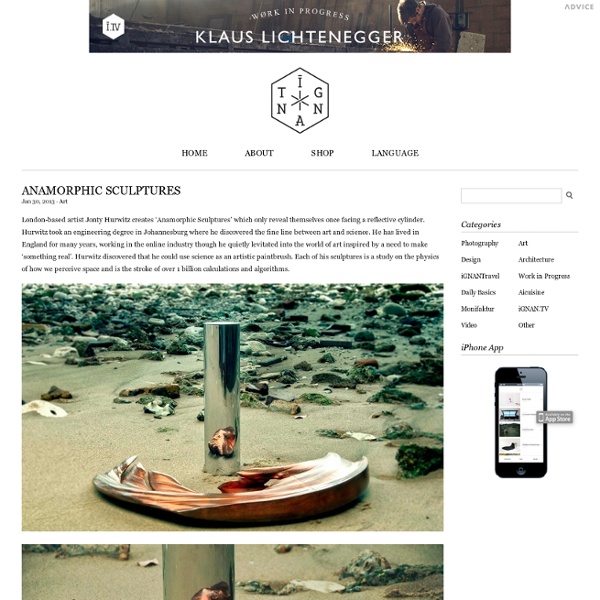 London-based artist Jonty Hurwitz creates ‘Anamorphic Sculptures’ which only reveal themselves once facing a reflective cylinder. Hurwitz took an engineering degree in Johannesburg where he discovered the fine line between art and science. He has lived in England for many years, working in the online industry though he quietly levitated into the world of art inspired by a need to make ‘something real’. Hurwitz discovered that he could use science as an artistic paintbrush. Each of his sculptures is a study on the physics of how we perceive space and is the stroke of over 1 billion calculations and algorithms. All images © Niina Keks, Otto Pierotto, Richard Ivey

Claire Morgan Beautiful hanging installations by Claire Morgan. A crow falling through a plane of strawberries? Yes, please. Rising Table by Robert Van Embricqs Fascinatingly Simple – Part Deux From one of my favorite designers, Robert van Embricqs, the Rising Table is the latest in a series of sculptural furniture elements that are not only functionally genius but also aesthetically fascinating. Like the rest of the Rising Series, the table utilizes a unique slat-folding technique to transform from a flat piece of seemingly solid wood to a fully functional table with an intricate web of wonderful angles and angular shapes that are a signature of this remarkable designer. The 33 Most Beautiful Abandoned Places In The World Many people doesn’t know, and didn’t even heard about these famous abandoned places. Many of these places are really something amazing, but they are also really sad when you take a closer look at them. On the folowing list, you can see abandoned planes, abandoned ships, as well as the abandoned houses, and so many other things, that are really amazing and magnificent. So, check out these amazing abandoned places photos.

Incredible Living Painting With Realistic Body Paint Usually, we admire that the artists can create characters vividly, while this time, we will introduce a different artist who turns living, breathing people into characters in oil painting. That is Alexa Meade. Alexa Meade is a 23-year-old artist based in Washington, DC area. She spent four summers interning on Capitol Hill and in 2008 was a press staffer on the Obama Campaign. She graduated in 2009 from Vassar College in Poughkeepsie, NY with a bachelor’s degree in political science.

Morgan Herrin Madeline von Foerster by okmarzo April 21, 2014 Ceramic Objects Encrusted with Marine Life As if lifted from the wreckage of the Titanic, ceramic artist Mary O’Malley creates sculptural porcelain teapots, cups, and vases adorned with barnacles, tentacles, and other living sea creatures (she refers to them as “porcelain crustaceans”). Many original works from this series titled ‘Bottom Feeders’ are available over on Etsy. (via laughing squid)

Park your car Dirty...Bring Home a Work of Art. This Parking Attendant does something Unbelievable. Most of the time parking attendants laugh at dirty cars. But that’s not the case in Azerbaijani, where a talented artist works as a parking attendant. Rafael Veyisov has made a habit of turning dirty cars into an elaborate work of art. He has been doing this for the last 10 years. Using only his fingers to create impressive cityscapes and other imaginary scenes, during his work hours in Baku, the capital of Azerbaijan. Drivers are surprised, impressed, and loves his work, so most of the time car owners even intentionally park their cars dirty to give him a good canvas. 15 People That Look EXACTLY The Same In Every Photo 15 People That Look EXACTLY The Same In Every Photo Now the hairstyles, locations, outfits and fake tans might change - but there's one thing that doesn't and that's the expression of these 15 people. It doesn't matter where they are, birthday, party, club, prom night or a red carpet event - it's all one and the same.

The Chill-Inducing Ceramic Sculptures of Ronit Baranga The sculptures of Israeli ceramicist Ronit Baranga flirt with the boundary between desire and repulsion. Baranga sculpts delicate lips and sensual fingertips, planting these tools of seduction in places where we least expect to find them. Plates and bowls grow mouths ready to lick and kiss.