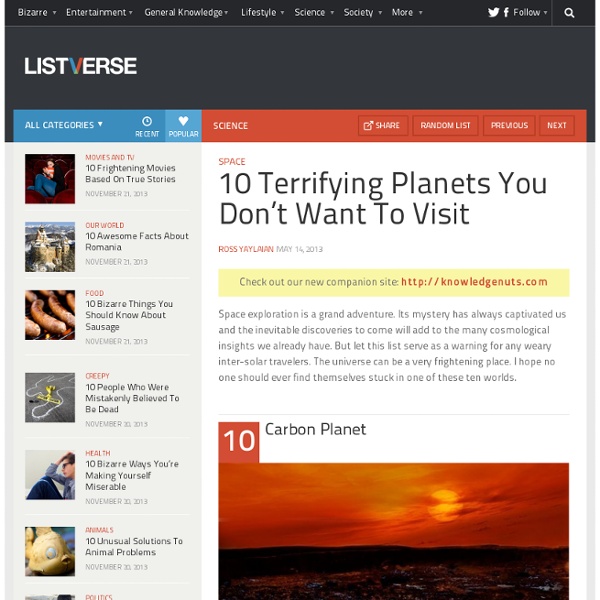 Space Space exploration is a grand adventure. Its mystery has always captivated us and the inevitable discoveries to come will add to the many cosmological insights we already have. But let this list serve as a warning for any weary inter-solar travelers. The universe can be a very frightening place. Our planet maintains a high ratio of oxygen to carbon. On Neptune, one can find constant jet stream winds that whip around the planet at terrifying speeds. Nick-named Bellerophon, in honor of the Greek hero who tamed the winged horse Pegasus, this gas giant is over 150 times as massive as earth and made mostly of hydrogen and helium. The densest and most massive exoplanet to date is a world known as COROT-exo-3b. On Mars a dust storm can develop in a matter of hours and envelope the entire planet within a few days. Simply put, this planet is the hottest planet ever discovered. Jupiter’s atmosphere brews storms twice as wide as the Earth itself. [Entry redacted.

100,000 Stars Astronomers Find First Evidence Of Other Universes There’s something exciting afoot in the world of cosmology. Last month, Roger Penrose at the University of Oxford and Vahe Gurzadyan at Yerevan State University in Armenia announced that they had found patterns of concentric circles in the cosmic microwave background, the echo of the Big Bang. This, they say, is exactly what you’d expect if the universe were eternally cyclical. By that, they mean that each cycle ends with a big bang that starts the next cycle. That’s an extraordinary discovery: evidence of something that occurred before the (conventional) Big Bang. Today, another group says they’ve found something else in the echo of the Big Bang. These bubbles probably had a violent past, jostling together and leaving “cosmic bruises” where they touched. Now Stephen Feeney at University College London and a few pals say they’ve found tentative evidence of this bruising in the form of circular patterns in cosmic microwave background. So, what to make of these discoveries. Ref:

2012 March 14 - Angry Sun Erupting Discover the cosmos! Each day a different image or photograph of our fascinating universe is featured, along with a brief explanation written by a professional astronomer. 2012 March 14 Explanation: It's one of the baddest sunspot regions in years. Active Region 1429 may not only look, to some, like an angry bird -- it has thrown off some of the most powerful flares and coronal mass ejections of the current solar cycle. The extended plumes from these explosions have even rained particles on the Earth's magnetosphere that have resulted in colorful auroras.

100,000 Stars Magnifying the Universe Embed this infographic on your site! <iframe width="500" height="323" scrolling="no" src=" frameborder="0" allowfullscreen></iframe><br />Copyright 2012. <a href=" the Universe</a> by <a href=" Sleuth</a>. The above is an interactive infographic. Introduction: This interactive infographic from Number Sleuth accurately illustrates the scale of over 100 items within the observable universe ranging from galaxies to insects, nebulae and stars to molecules and atoms. While other sites have tried to magnify the universe, no one else has done so with real photographs and 3D renderings. We hope you have a blast magnifying the universe, know that each time you zoom in a depth, you're magnifying the universe 10x ... and every time you zoom out, the bigger objects are 1/10th of their prior size. How To Use: Credits:

What am I looking at? Last updated: 5th July 2012 Nick Risinger, skysurvey.org Took 1026ms to load. Gamma rayX-rayVisibleHydrogen αNear-InfraredFar-InfraredMicrowaveRadio The Milky Way is shown across the middle. The north pole of the Galaxy is towards the top. Help | 0.00°, -0.00° Gal Chromoscope shows you the view of the Universe that we get from Earth. If you don't like reading, you could listen to us talk about Chromoscope on the 365 Days of Astronomy podcast. Index The Milky Way is made up of around 100 thousand million stars but our eyes only let us see a few thousand of the brightest/closest. Barnard's Loop in Orion As we mentioned above, the initial view is that as seen with visible light but taken with photographic equipment with long exposures to allow you to see more detail and fainter objects. By pressing 'L' on your keyboard you can turn on the constellation labels to help you orientate yourself. Some common questions: H-alpha light allows us to trace out the location of hydrogen gas in our galaxy.

Scientist Claims Our Solar System Evicted A Planet So Earth Could Survive Colorado scientist David Nesvorny was running solar system evolutionary simulations recently when he realized that during 6,000 different simulations the Earth couldn’t survive during the system’s early years based on the current planetary count. Once Nesvorny added another planet to the system however Earth survived as expected. According to his work our solar system at one point had a ninth planet, a gas giant that was nudged out of the system billions of years ago to make room for Earth’s survival. According to the Mother Nature Network “gas giant number five” started off bound together with Saturn and Jupiter and pushed out lighter planets including Neptune and Uranus eventually to be pushed out of the system on its own after a collision with Jupiter. According to his work David said the planet was likely orbiting about 15 times further from the sun than our own planet.

Moon water came from young wet Earth - space - 09 May 2013 The notion that all Earth's water was delivered by comets or asteroids has just taken a hit. Chemical analysis of lunar rocks suggests that Earth was born wet, and it held on to its water long enough to donate some to the moon. The moon is thought to have formed after a massive collision between the infant Earth and another proto-planet around 4.5 billion years ago. Until a few years ago, most astronomers thought that the moon must be bone dry – any water would have been vaporised in the impact. That changed when Alberto Saal of Brown University in Providence, Rhode Island, and colleagues studied rocks brought back from the Apollo 17 mission in the 1970s. "The question became, where did the water come from?" Water level Several research teams had already tackled the question by measuring the ratios of hydrogen and its heavier isotope, deuterium, in primitive rocks from Earth and the moon. "It becomes a fingerprint for where the water condensed," says Saal. Impact rate Migrating Earth

Meteoroid impact triggers bright flash on the moon CAPE CANAVERAL, Florida (Reuters) - An automated telescope monitoring the moon has captured images of an 88-pound (40 kg) rock slamming into the lunar surface, creating a bright flash of light, NASA scientists said on Friday. The explosion on March 17 was the biggest seen since NASA began watching the moon for meteoroid impacts about eight years ago. So far, more than 300 strikes have been recorded. "It exploded in a flash nearly 10 times as bright as anything we've ever seen before," Bill Cooke, with NASA's Meteoroid Environment Office at the Marshall Space Flight Center in Huntsville, Alabama, said in a statement. A NASA satellite orbiting the moon is now on a hunt for the newly formed crater, which scientists estimate could be as wide as 66 feet. The flash was so bright that anyone looking at the moon at the moment of impact could have seen it without a telescope, NASA said. But not always. (Editing by Kevin Gray and Doina Chiacu)

Extensive water in Mars' interior -- Science & Technology © NASAMars, as seen by the Hubble Space Telescope. Until now, Earth was the only planet known to have vast reservoirs of water in its interior. Scientists analyzed the water content of two Martian meteorites originating from inside the Red Planet. They found that the amount of water in places of the Martian mantle is vastly larger than previous estimates and is similar to that of Earth's. The research was led by former Carnegie postdoctoral scientist Francis McCubbin, now at the University of New Mexico. The scientists analyzed what are called shergottite meteorites. "We analyzed two meteorites that had very different processing histories," explained Hauri. Based on the mineral's water content, the scientists estimated that the Martian mantle source from which the rocks were derived contained between 70 and 300 parts per million (ppm) water. "There has been substantial evidence for the presence of liquid water at the Martian surface for some time," Hauri said.