Famous Advice on Writing: The Collected Wisdom of Great Writers 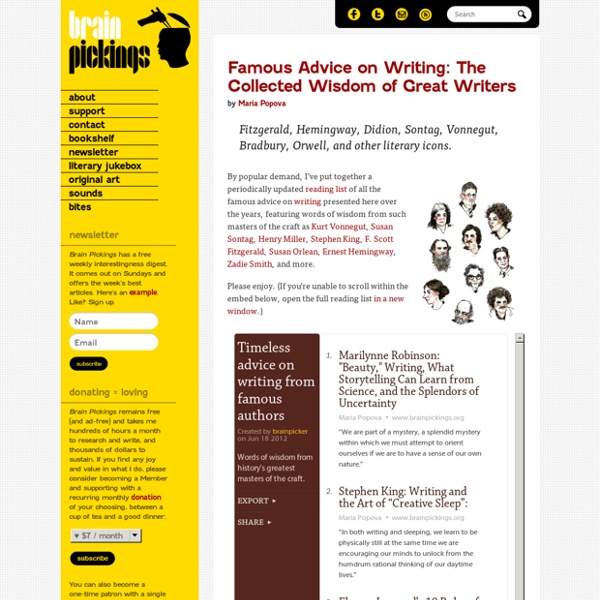 by Maria Popova Fitzgerald, Hemingway, Didion, Sontag, Vonnegut, Bradbury, Orwell, and other literary icons. By popular demand, I’ve put together a periodically updated reading list of all the famous advice on writing presented here over the years, featuring words of wisdom from such masters of the craft as Kurt Vonnegut, Susan Sontag, Henry Miller, Stephen King, F. Scott Fitzgerald, Susan Orlean, Ernest Hemingway, Zadie Smith, and more. Please enjoy. (If you’re unable to scroll within the embed below, open the full reading list in a new window.) Donating = Loving Bringing you (ad-free) Brain Pickings takes hundreds of hours each month. You can also become a one-time patron with a single donation in any amount: Brain Pickings has a free weekly newsletter. Share on Tumblr

How to Write with Style: Kurt Vonnegut’s 8 Keys to the Power of the Written Word Find a Subject You Care About Find a subject you care about and which you in your heart feel others should care about. It is this genuine caring, and not your games with language, which will be the most compelling and seductive element in your style. I am not urging you to write a novel, by the way — although I would not be sorry if you wrote one, provided you genuinely cared about something. Neil Gaiman’s 8 Rules of Writing By Maria Popova In the winter of 2010, inspired by Elmore Leonard’s 10 rules of writing published in The New York Times nearly a decade earlier, The Guardian reached out to some of today’s most celebrated authors and asked them to each offer his or her commandments. After Zadie Smith’s 10 rules of writing, here come 8 from the one and only Neil Gaiman: WritePut one word after another. Find the right word, put it down.Finish what you’re writing.

Kurt Vonnegut’s 8 Tips on How to Write a Great Story By Maria Popova The year of reading more and writing better is well underway with writing advice the likes of David Ogilvy’s 10 no-bullshit tips, Henry Miller’s 11 commandments, Jack Kerouac’s 30 beliefs and techniques, John Steinbeck’s 6 pointers, and various invaluable insight from other great writers. Now comes Kurt Vonnegut (November 11, 1922–April 11, 2007) — anarchist, Second Life dweller, imaginary interviewer of the dead, sad soul — with eight tips on how to write a good short story, narrated by the author himself.

Data Mining Novels Reveals the Six Basic Emotional Arcs of Storytelling Back in 1995, Kurt Vonnegut gave a lecture in which he described his theory about the shapes of stories. In the process, he plotted several examples on a blackboard. “There is no reason why the simple shapes of stories can’t be fed into computers,” he said. What I’ve Learned as a Writer By Leo Babauta I’ve been a professional writer since I was 17: so nearly 24 years now. I’ve made my living with words, and have written a lot of them — more than 10 million (though many of them were duplicates). That means I’ve made a ton of errors. Lots of typos. 10 Everyday Words With Unexpected Origins Books Etymology, or the study of the origin of words, is dry, dusty stuff that will give you allergies if you play with it too long. It also happens to be one of our favorite topics—because sometimes a word travels through such a twisted path to get to its modern meaning that all you can do is scratch your head and wonder how civilization manages to keep itself going. Read on to find out what word got its start with people biting the heads off chickens, how a peaceful word became an international symbol of hate, and how wooden shoes changed the world. What it means now: “Completely lacking in subtlety; very obvious.”

Kids explain how banned and challenged books helped them and even saved their lives / Boing Boing By Joan Bertin and Millie Davis Banned Books Week has come and gone but we can be sure of one thing: the coming year will be marked by challenges to the same kinds of books that were controversial this year, and in years past. report this ad Controversies over what books are taught in class or shelved in the school library typically start when an adult—usually a parent or community member—feels that a book selected by teachers and librarians is inappropriate, offensive or objectionable. Anne Lamott’s Timeless Advice on Writing and Why Perfectionism Kills Creativity by Maria Popova “Perfectionism is the voice of the oppressor, the enemy of the people. It will keep you cramped and insane your whole life.” Anne Lamott’s Bird by Bird: Some Instructions on Writing and Life (public library) is among my 10 favorite books on writing — a treasure trove of insight both practical and profound, timelessly revisitable and yielding deeper resonance each time.