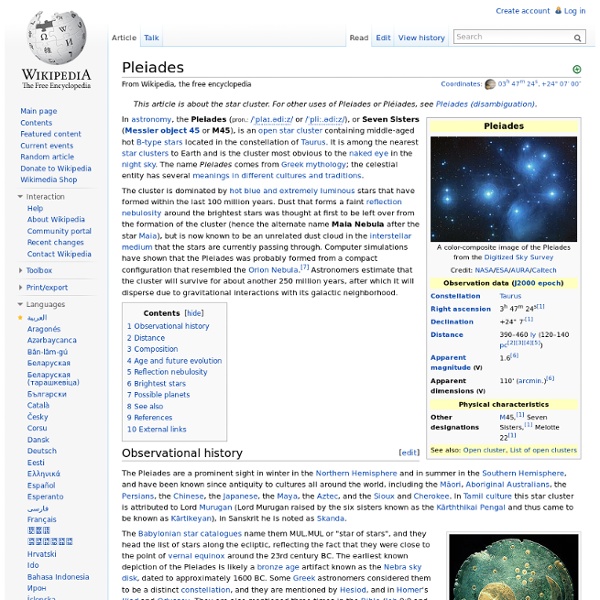 Observational history[edit] The Pleiades are a prominent sight in winter in both the Northern Hemisphere and Southern Hemisphere, and have been known since antiquity to cultures all around the world, including the Māori, Aboriginal Australians, the Persians, the Arabs (known as Thurayya), the Chinese, the Japanese, the Maya, the Aztec, and the Sioux and Cherokee. In Tamil culture this star cluster is attributed to Lord Murugan (Lord Murugan raised by the six sisters known as the Kārththikai Pengal and thus came to be known as Kārtikeyan). In Sanskrit he is known as Skanda. The Nebra sky disk, dated c. 1600 BC. The Babylonian star catalogues name the Pleiades MUL.MUL or "star of stars", and they head the list of stars along the ecliptic, reflecting the fact that they were close to the point of vernal equinox around the 23rd century BC. In Japan, the constellation is mentioned under the name Mutsuraboshi ("six stars") in the 8th century Kojiki and Manyosyu documents. ). Distance[edit]

Chimera (genetics) A chimera (also spelled chimaera) is a single organism composed of genetically distinct cells. This can result in male and female organs, two different blood types, or subtle variations in form.[1] Animal chimeras are produced by the merger of multiple fertilized eggs. In plant chimeras, however, the distinct types of tissue may originate from the same zygote, and the difference is often due to mutation during ordinary cell division. Normally, chimerism is not visible on casual inspection; however, it has been detected in the course of proving parentage. Another way that chimerism can occur in animals is by organ transplantation, giving one individual tissues that developed from two different genomes. For example, a bone marrow transplant can change someone's blood type. This condition is either inherited or it is acquired through the infusion of allogeneic hematopoietic cells during transplantation or transfusion. Tetragametic chimerism is a form of congenital chimerism.

Arcturus Arcturus is a type K1.5 IIIpe orange giant star, with an absolute magnitude of −0.30. It has likely exhausted its hydrogen from the core and is currently in its active hydrogen shell burning phase. It will continue to expand before entering horizontal branch stage of its life cycle. Observational history[edit] As one of the brightest stars in the sky, Arcturus has been significant to observers since antiquity. According to the Hipparcos satellite, Arcturus is 36.7 light years (11.3 parsecs) from Earth, relatively close in astronomical terms. Visibility[edit] Arcturus has a visual magnitude of −0.04, making it the brightest star north of the celestial equator, and the fourth brightest star in the night sky.[9] However, Alpha Centauri is a bright binary star, whose unresolved components to the naked eye are both fainter than Arcturus. Arcturus is visible from both Earth's hemispheres as it is located 19° north of the celestial equator. Physical properties[edit] Oscillations[edit] China[edit]

Hermes ancient Greek god of boundaries, roads, merchants, and thieves Hermes (; Greek: Ἑρμῆς) is a deity in ancient Greek religion and mythology. Hermes is considered the herald of the gods, as well as the protector of human heralds, travellers, thieves,[1] merchants, and orators.[2][3] He is able to move quickly and freely between the worlds of the mortal and the divine, aided by his winged sandals. Hermes plays the role of the psychopomp or "soul guide" — a conductor of souls into the afterlife.[4][5] His attributes and symbols include the herma, the rooster, the tortoise, satchel or pouch, talaria (winged sandals), and winged helmet or simple petasos, as well as the palm tree, goat, the number four, several kinds of fish, and incense.[9] However, his main symbol is the caduceus, a winged staff intertwined with two snakes copulating and carvings of the other gods.[10] His attributes had previously influenced the earlier Etruscan god Turms, a name borrowed from the Greek "herma".[11]

Brotherhood of the Snake When the Earth descended into the third dimension and the 'Planetary Logos' (the soul of the Earth) entered a new cycle of experience, humans reached their zenith in polar consciousness. To this day, the cycle of opposites and '- the feeling of separation has prevailed. ~One could say that when Atlantis and its continent sank, the ,Earth left the fourth and fifth dimensions to enter the realm of -the three dimensional material structure. With the descent into the third dimension, the remaining human race .lost consciousnes's of the Oneness of all things. Polarity ,awareness took over and instead of harmony, more and more opposites entered the consciousness and the actions of .human beings. Shambhala was the seat of the Evocation of the Masters of Wisdom,, Agartha was the seat of the Invocation of the Masters of Wisdom. In the outer world, each Brotherhood thought of the other one as the dark Brotherhood, the Black Magicians. World politics and religions have the same objective.

C/2010 X1 Comet C/2010 X1 (Elenin) is a long-period comet discovered by Russian amateur astronomer Leonid Elenin on December 10, 2010, through remote control of the International Scientific Optical Network's robotic observatory near Mayhill in the U.S. state of New Mexico. The discovery was made using the automated asteroids discovery program CoLiTec. At the time of discovery, the comet had an apparent magnitude of 19.5,[2] making it about 150,000 times fainter than can be seen with the naked eye.[5] The discoverer, Leonid Elenin, originally estimated that the comet nucleus was 3–4 km in diameter,[6] but more recent estimates place the pre-breakup size of the comet at 2 km.[7] Comet Elenin started disintegrating in August 2011,[8] and as of mid-October 2011 was not visible even using large ground-based telescopes.[9] Brightness[edit] Original and future orbit[edit] References[edit] External links[edit]

Apollo Apollo (Attic, Ionic, and Homeric Greek: Ἀπόλλων, Apollōn (GEN Ἀπόλλωνος); Doric: Ἀπέλλων, Apellōn; Arcadocypriot: Ἀπείλων, Apeilōn; Aeolic: Ἄπλουν, Aploun; Latin: Apollō) is one of the most important and complex of the Olympian deities in classical Greek and Roman religion and Greek and Roman mythology. The ideal of the kouros (a beardless, athletic youth), Apollo has been variously recognized as a god of light and the sun, truth and prophecy, healing, plague, music, poetry, and more. Apollo is the son of Zeus and Leto, and has a twin sister, the chaste huntress Artemis. Apollo is known in Greek-influenced Etruscan mythology as Apulu. Etymology Tetradrachm from the Illyro-Paeonian region, representing Apollo The etymology of Apollo is uncertain. Several instances of popular etymology are attested from ancient authors. A Luwian etymology suggested for Apaliunas makes Apollo "The One of Entrapment", perhaps in the sense of "Hunter".[11] Greco-Roman epithets

Hollow Earth Cities Recently, America watched Stephen Spielberg's TV pilot, a remake of Verne' s "Journey to the Center of the Earth." A maverick team of scientists aboard their melt-proof ship enter the inner Earth through a bubbling volcano. When things cool off, they find themselves exploring a vast and sunny inner landscape . . . a magical and inviting world with ample room to fly. The Agartha Network Think of Shamballa the Lesser as the United Nations of over 100 subterranean cities that form the Agartha Network. Capitol Cities POSID: Primary Atlantean outpost, located beneath the Mato Grosso plains region of Brazil. SHONSHE: Refuge of the Uighur culture, a branch of the Lemurians who chose to form their own colonies 50,000 years ago. RAMA: Remnant of the surface city of Rama, India located near Jaipur. SHINGWA: Remnant of the northern migration of the Uighurs. Spotlight on Telos How can over a million people make their home inside Mt. LEVEL 3: Hydroponic gardens. LEVEL 5: The nature level.

99942 Apophis 99942 Apophis (/əˈpɒfɪs/, previously known by its provisional designation 2004 MN4) is a near-Earth asteroid that caused a brief period of concern in December 2004 because initial observations indicated a probability of up to 2.7% that it would hit Earth in 2029. Additional observations provided improved predictions that eliminated the possibility of an impact on Earth or the Moon in 2029. However, a possibility remained that during the 2029 close encounter with Earth, Apophis would pass through a gravitational keyhole, a small region no more than about 800 m (half a mile) wide,[7] that would set up a future impact on April 13, 2036. This possibility kept the asteroid at Level 1 on the Torino impact hazard scale until August 2006, when the probability that Apophis would pass through the keyhole was determined to be very small. During the short time when it had been most concerning, Apophis set the record for highest rating on the Torino Scale, reaching level 4.[8] Close approaches[edit]

Eros In Greek mythology, Eros (, ;[2] Ancient Greek: Ἔρως, "Desire") is the Greek god of love and sex. His Roman counterpart was Cupid ("desire").[3] Normally, he is described as one of the children of Aphrodite and Ares and, with some of his siblings, was one of the Erotes, a group of winged love gods. In some traditions, he is described as one of the primordial gods. Etymology[edit] The Greek ἔρως, meaning "desire," comes from ἔραμαι "to desire, love", of uncertain etymology. Cult and depiction[edit] Eros appears in ancient Greek sources under several different guises. A cult of Eros existed in pre-classical Greece, but it was much less important than that of Aphrodite. Primordial god[edit] Homer does not mention Eros. At the beginning there was only Chaos, Night (Nyx), Darkness (Erebus), and the Abyss (Tartarus). Son of Aphrodite and Ares[edit] [Hera addresses Athena:] “We must have a word with Aphrodite. Eros and Psyche[edit] In Greek mythology, Psyche was the deification of the human soul.

The Freeman Perspective Sirius Sirius appears bright because of both its intrinsic luminosity and its proximity to Earth. At a distance of 2.6 parsecs (8.6 ly), as determined by the Hipparcos astrometry satellite,[5][19][20] the Sirius system is one of Earth's near neighbors. Sirius is gradually moving closer to the Solar System, so it will slightly increase in brightness over the next 60,000 years. After that time its distance will begin to recede, but it will continue to be the brightest star in the Earth's sky for the next 210,000 years.[21] Sirius A is about twice as massive as the Sun (M☉) and has an absolute visual magnitude of 1.42. Observational history[edit] Sirius, known in ancient Egypt as Sopdet (Greek: Σῶθις Sothis), is recorded in the earliest astronomical records. Ptolemy of Alexandria mapped the stars in Books VII and VIII of his Almagest, in which he used Sirius as the location for the globe's central meridian. The indigenous Boorong people of northwestern Victoria named Sirius as Warepil.[42]

Artemis Goddess of the hunt and the wild in ancient Greek religion and myth Artemis was one of the most widely venerated of the Ancient Greek deities, her worship spread throughout ancient Greece, with her multiple temples, altars, shrines, and local veneration found everywhere in the ancient world. Her great temple at Ephesus was one of the Seven Wonders of the Ancient World, before it was burnt to the ground. Artemis' symbols included a bow and arrow, a quiver, and hunting knives, and the deer and the cypress were sacred to her. Diana, her Roman equivalent, was especially worshipped on the Aventine Hill in Rome, near Lake Nemi in the Alban Hills, and in Campania.[5] Etymology[edit] According to J. Description[edit] Artemis as Mistress of Animals, Parian pottery, 675–600 BCE Artemis is presented as a goddess who delights in hunting and punishes harshly those who cross her. Mythology[edit] Birth[edit] The myths also differ as to whether Artemis was born first, or Apollo. Childhood[edit] Actaeon[edit]