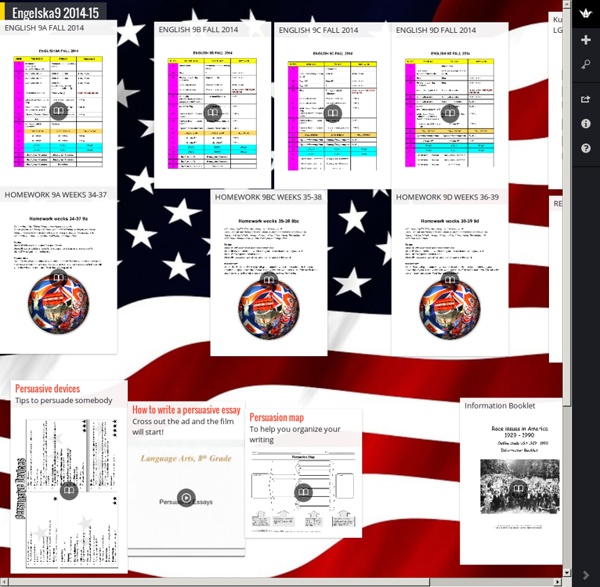 From NY to Texas, KKK recruits with candies and fliers Your video will begin momentarily. Ku Klux Klan recruitment fliers are turning up on driveways across the countryFliers, usually left with candies, appear to be part of a wider recruitment effortThe Klan may be seizing on a time when race and immigration are dominant issues, some say (CNN) -- Carlos Enrique Londoño laughs at the Ku Klux Klan recruitment flier recently left on the driveway of his suburban New York home. It's unlikely the group would accept him. Common Writing Mistakes - English Writing - Learn English Free This article features "dictionary look up". Just double click on any word to get an instant definition (uses a pop-up). Common Writing Mistakes by Michael LaRocca Most books aren't rejected because the stories are "bad." They're rejected because they're not "ready to read."

Desegregation The Civil Rights Movement is sometimes defined as a struggle against racial segregation that began in 1955 when Rosa Parks, the "seamstress with tired feet," refused to give up her seat to a white man on a bus in Alabama. Brown v. Board of Education, the 1954 Supreme Court case that attacked the notion of "separate but equal," has also been identified as the catalyst for this extraordinary period of organized boycotts, student protests, and mass marches.

Educational Technology and Mobile Learning: Excellent Story Writing Apps for ... July 31, 2015 Below is a short collection of some interesting iPad apps students can use to help them with their writing and more specifically, outlining, drafting and writing stories. Some of these apps are featured here for the first time but for more options on digital storytelling apps check out this page. 1- The Brainstormer ‘The Brainstormer is kindling for creative minds. A tactile tool to randomly combine a plot, a subject and a setting or style, the Brainstormer provides a moment of inspiration for writers, painters, or any creative mind. Combat creative block, spark new ideas and summon up quick subjects for doodling, sketching or journaling.’

"Black Power" Era The impressive March on Washington in the summer of 1963 has been remembered as one of the great successes of the Civil Rights Movement, a glorious high point in which a quarter of a million people—black and white—gathered at the nation's capital to demonstrate for "freedom now." But for many African Americans, especially those living in inner-city ghettos who discovered that nonviolent boycotts and sit-ins did little to alter their daily lives, the great march of 1963 marked only the first stage of a new, more radical phase of the Civil Rights Movement. You probably just finished reading the first chapter of the Civil Rights Movement. (Hint, hint.) Isn't it incredible how much had been accomplished by civil rights activists from World War II to the 1963 March on Washington? Isn't it staggering just how much had been sacrificed, how high the stakes had been raised, and how widespread the movement had become?

Need more writing ideas for this year? Bookmark this blog series. Check out the six blog posts filled with teaching ideas and resources—written by teachers—in our Teaching Young Writers blog series. We partnered with WeAreTeachers to bring this quick-to-read, inspiring series to life. As you lesson plan and gather ideas for the year, you'll find • 5 peer conferencing strategies for revising and editing. • 10 grammar lessons to fix some mistakes that drive us crazy. • 25 anchor charts for teaching writing and more!

Veterans of the Civil Rights Movement Literacy Tests & Voter Applications Alabama Georgia Louisiana: Mississippi South Carolina More Free Graphic Organizers for Teaching Writing More Free Graphic Organizers for Teaching Writing Introduction The free graphic organizers that I offer on this page come from the collection of 50 More WRITERizers, the successor of 50 WRITERizers, which has generated loads of interest over the last couple of years—thanks to you and our colleagues. I truly believe that this newer collection breaks completely new ground.

African-American Civil Rights Movement (1954–68) The African-American Civil Rights Movement or 1960s Civil Rights Movement encompasses social movements in the United States whose goals were to end racial segregation and discrimination against black Americans and to secure legal recognition and federal protection of the citizenship rights enumerated in the Constitution and federal law. This article covers the phase of the movement between 1954 and 1968, particularly in the South. A wave of inner city riots in black communities from 1964 through 1970 undercut support from the white community. The emergence of the Black Power movement, which lasted from about 1966 to 1975, challenged the established black leadership for its cooperative attitude and its nonviolence, and instead demanded political and economic self-sufficiency. During the same time as African Americans were being disenfranchised, white Democrats imposed racial segregation by law. Violence against blacks increased, with numerous lynchings through the turn of the century.

Anna's wet day out Find a picture of the hero of your story in a magazine or on the internet, big enough for your teaching situation. Procedure Stage 1: Brainstorming Write the title 'Anna's wet day out' at the top of the board. Check students understand the meaning.Divide your board into four quarters and title these: 'Anna', 'Day out', 'What happened' and 'The end'.Show students the picture and ask the following questions: How old is she? What can Teachers Learn from Nelson Mandela to Make a Difference? We teach language to help people communicate. Why do people want to communicate? ​ ​To express the human story through myth, inspiration and powerful transformation. ​ ​Let’s dig deeper into the story of Nelson Mandela and help our students think, communicate and become active narrators in the search for peace and what makes us human. What can we teach students about Nelson Mandela through the power of video and multi-media?