Watch These Two Young Rockers Absolutely Crush This Badass Cover Of Heart's 'Barracuda' (1) The Cars - You Might Think. (1) The Who - Jaguar. (1) Lulu To Sir With Love 1967 Stereo. (1) Lulu - I'll Come Running Over - 1966. (1) 60's Garage, Surf, Freakbeat & Psychedelic Music - Vol. 4. (1) My Generation - The Who (Live at the Isle of Wight) The Beach Boys’ “Pet Sounds” – History of Record Production and Recording Industries. Introduction 1966 was a year of firsts; the first Acid Tests were held at The Fillmore in San Francisco, Robert C. 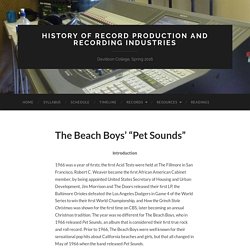 Weaver became the first African American Cabinet member, by being appointed United States Secretary of Housing and Urban Development, Jim Morrison and The Doors released their first LP, the Baltimore Orioles defeated the Los Angeles Dodgers in Game 4 of the World Series to win their first World Championship, and How the Grinch Stole Christmas was shown for the first time on CBS, later becoming an annual Christmas tradition. The year was no different for The Beach Boys, who in 1966 released Pet Sounds, an album that is considered their first true rock and roll record. 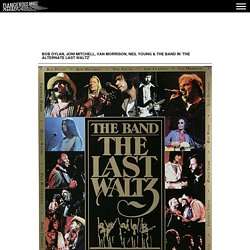 The audio and video sound quality is amazing and best of all, this is not only how it went down, in the order that it went down, and it’s actually how it sounded before Robbie Robertson went in and overdubbed everything. (It’s also not had that blob of cocaine hanging from Neil Young’s nose edited out through frame by frame rotoscoping…) (63) Small Faces - Itchycoo Park (1967) 0815007. □ □ Brenda Lee - Rockin' Around the Christmas Tree □ □ Live! Brenda Lee - Rockin' Around The Christmas Tree. Fat Matress-Naturally-Live-1968-[Beat-Club] Jimi Hendrix Experience Beat Beat Beat Germany 1967,

Fat Mattress. We ask you, humbly, to help. 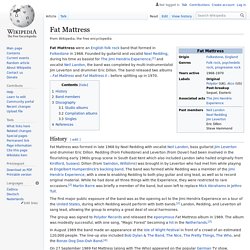 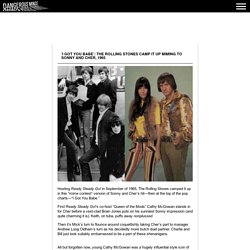 In September of 1965, The Rolling Stones camped it up in this “mime contest” version of Sonny and Cher’s hit—then at the top of the pop charts—“I Got You Babe.” First Ready Steady Go! Jimi Hendrix: 10 Great Pre-Fame Tracks. Towards the end of 1963, Hendrix was based in Nashville playing with a group called the King Kasuals when a talent scout fed him a line about becoming a big star in the Big Apple. 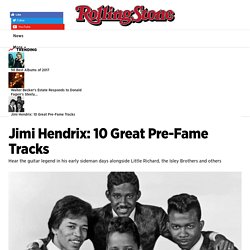 The rest of the band opted to stay put, but the ambitious ax man decided to seek his fortune in New York City. Prospects were initially bleak, and with little more than a borrowed winter coat to his name, he was often forced to pawn his guitar to survive. Even after he won a talent competition – and a badly needed $25 – at Harlem's legendary Apollo Theater, he spent most of his days hanging around local clubs, angling for a chance to jam with the house bands.

It was at one such venue, the Palm Café, that he met Lithofayne "Faye" Pridgon, a stylish and streetwise woman who had once dated Sam Cooke. Hendrix became her latest conquest, and she provided him with both a place to sleep and an entrée into the Harlem music scene. Wayne Cochran, Influential Soul Singer, Dead at 78. Wayne Cochran, the influential singer dubbed "The White Knight of Soul" and writer of songs like "Last Kiss" and "Goin' Back to Miami," died November 21st in Miramar, Florida. 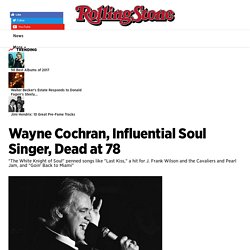 He was 78. Cochran's son Christopher confirmed to the Miami Herald that the soul singer died following a battle with cancer. Cochran had resided in Florida since the mid-Eighties, when he left the music industry to become an evangelical minister in Miami. Salon. Mitch Mitchell: Drum Solo with Jimi Hendrix. Theconversation. The Beatles’ Sgt Pepper’s Lonely Hearts Club Band turns 50 on June 1 and the anniversary of this legendary album will be celebrated in style. 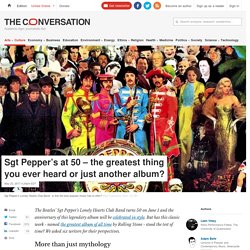 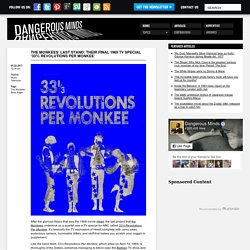 It’s basically the TV equivalent of Head, complete with corny jokes, audacious cameos, hummable ditties, and stuff that makes you scratch your noggin in puzzlement. Like the band itself, 33⅓ Revolutions Per Monkee, which aired on April 14, 1969, is thoroughly of the Sixties, somehow managing to blend (say) the Batman TV show and Barbarella with musical performance shows of the day like Shindig! Katy Perry Addresses Taylor Swift Beef on 'Carpool Karaoke' - Rolling Stone. Katy Perry and James Corden sang "Firework," "Dark Horse," "Bon Appetit," "Swish Swish," and "Roar" during the latest segment of Corden's immensely popular "Carpool Karaoke" segment on The Late Late Show. 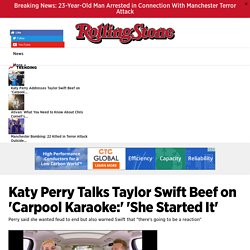 Just as entertaining: the pop star also used the platform to, once and for all, plainly address her antagonism with Taylor Swift, saying that it was Swift's responsibility to end their feud. Perry was an energetic karaoke companion: she shouted instructions to Corden like a drill sergeant – "body roll! " "stank face! " "let's go to Ibiza! " "come out raging! " Katy Perry’s New Cooking-Themed Video Is Extremely Upsetting - Eater. Chuck Berry's Finest Deep Cuts: 10 Overlooked Gems. Theconversation. The death of Chuck Berry over the weekend at the age of 90 has led to an outpouring of respect for a man widely recognised as one of the most important founding figures of rock and roll. 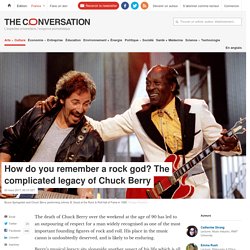 His place in the music canon is undoubtedly deserved, and is likely to be enduring. Berry’s musical legacy sits alongside another aspect of his life which is all too familiar in the music industry – a history of mistreatment of women. Theconversation. When time travel adventure Back to the Future included the conceit of the white 1980s teenager, Marty McFly, inventing rock ‘n’ roll, there was really only one song to hang it on – Chuck Berry’s “Johnny B.

Goode”. Legendary is an overused adjective in popular culture, but Berry’s passing is a salutary reminder of what a giant in the field actually looked like. Log In - New York Times. Anne Hathaway's Wrecking Ball vs. Emily Blunt's Piece of My Heart. Peter Guralnick on Why Chuck Berry Is Greater Than You Think - Rolling Stone. The first time I met Chuck Berry he was playing a club called Where It's At, which, in contradiction of its name, occupied the second floor of a drab business building in Kenmore Square and was operated by longtime Boston DJ Dave Maynard and his manager, Ruth Clenott. It was 1967, and I was in my senior year of college, working at the Paperback Booksmith, as I had for the last four years, both in and out of school. I was making $65 a week. The reason I know this is because Chuck Berry signed my paycheck. Well, it wasn't my paycheck exactly, it was my paycheck stub, and the reason he signed it was because I didn't have anything else to present to him for an autograph.

Jimi Hendrix - She's So Fine (Drums Only) The Walker Brothers - Make It Easy On Yourself. Readers' Poll: The 10 Best Beach Boys Deep Cuts. On December 17th, 1966, a CBS camera crew arrived at Brian Wilson's house to interview him for a Leonard Bernstein-hosted special about pop music. At the time, he felt that Smile was coming along wonderfully and he was eager to share his new song "Surf's Up.

" With three cameras rolling, he delivered one of the most stirring performances of his entire career. There's not even a tiny hint of the growing madness inside his head. Rollingstone. If you wish to launch a humdinger of an argument – and one you might win – sidle up to just about any 1960s rock fan and offer the opinion that it was not the Beatles, the Stones, Pink Floyd, Hendrix, the Velvet Underground or the Byrds who were the key sonic inventors of the decade. Nope: wasn't any of those collectives of aural innovation who did quite what the Yardbirds did in terms of overhauling sound, never mind that they couldn't keep a steady lineup and were pretty much unclassifiable, save as the dudes who influenced everybody else and basically birthed blues rock, garage rock and heavy metal.

Said birthing was in large part due to what they did for that brief moment in time, spanning 1965 to 1966, when Jeff Beck replaced Eric Clapton on guitar, before he became sick of riding around on tour buses and was in turn replaced by Jimmy Page. These are the five songs for that sonic innovators par excellence argument. Pass That Bottle - The Devil's Daughters AZ Rockabilly. JUNIOR BROWN-surf medley.avi. Dave Myers & The Surftones - Moment Of Truth. Electric Flag " KILLING FLOOR " Live. "BLIND FAITH" - FULL ALBUM REMASTERED (HD) 7-7-1969. Baby Please Don't Go, Van Morrison and Them 1964. Jefferson Airplane - Wooden Ships. Stranger To Himself - Sandy Denny & Fairport Convention. Traffic - Stranger To Himself 1970 Remastered.

Something Stupid - Frank & Nancy Sinatra. The Supremes - Back In My Arms Again (Hullabaloo May 11, 1965) Love is Here and Now You're Gone The Supremes. Kidneythieves - "Zerospace" Extasy Records. S Late Night Music Club With Sex Pistols. Yeah Yeah Yeahs, Live In Concert: SXSW 2013. The Rolling Stones in Concert 1964. The Beach Boys - Don't Worry Baby (HQ Audio) Two Hours Of Jimi Hendrix On World Cafe. Devil Doll (band) Devil Doll is an Italian-Slovenian experimental rock band formed in 1987 by the mysterious "Mr. Doctor". The band has gained a cult following, taking influences from gothic rock, classical and Slavonic folk music, and fronted by the sprechgesang of Mr. Doctor himself. The band is notable for very lengthy epics, none under 20 minutes.[2][3] Mr.

"A man is the less likely to become great the more he is dominated by reason: few can achieve greatness - and none in art - if they are not dominated by illusion. " Originally, two lineups were formed, one in Venice, Italy, and one in Ljubljana, Yugoslavia. Later the same year, work on a second composition began. In 1989, Mr. In 1991, the two lineups of Devil Doll were combined into one, and in December, the combined lineup, with the new pianist Francesco Carta, entered Tivoli Studios to record Sacrilegium. Sacrilegium was released in May 1992. In January the next year, a soundtrack to a movie by Mr. Someday We'll Be Together - Diana Ross & The Supremes. The Innocence Mission - I Remember Me - US TV debut. LANA DEL REY - '"NATIONAL ANTHEM" (OFFICIAL VIDEO) MORNING DEW (1968) by the Jeff Beck Group (extensive slideshow video)

For JACKIE DE SHANNON (born 1942), the identity switch was a necessity of commercial survival. Yet her masks once formed a coherent identity. It was predicated on the pure quality of her warm, scratched, passionate, longing voice; it lay in a continuity of sound and soul. You felt the fine sweet gravel of the voice and, whatever style it was singing, you said Hey — I know you. Working the pop templates of 1963–69 with a succession of producers and co-writers, she did a folk album; a teendream album; a soul album; a glitzy ballad album; a hippie album; a singer-songwriter album. Her costumes came and went, her sounds changed like shifting light, her masks and moods multiplied. Be that as it may, in her great years — see Breaking it Up on the Beatles Tour! On his or her birthday, HiLobrow irregularly pays tribute to one of our high-, low-, no-, or hilobrow heroes.

Remember (Walking in the Sand) Madonna - Ray Of Light. Emmylou Harris - One Of These Days. Madonna - Bedtime Story. BLACK METAL SONGS REIMAGINED AS SURF ROCK. I don’t think they get to enjoy a lot of surfing in Norway, but now, thanks to some enterprising YouTube users, we can imagine what black metal might be like if it came from someplace sunny and warm. George Harrison And Bob Dylan If Not For You Rehearsal.