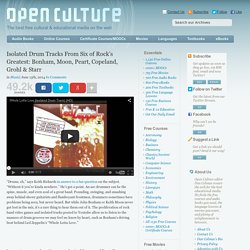 “Without it you’re kinda nowhere.” He’s got a point. An ace drummer can be the spine, muscle, and even soul of a great band. Pounding, swinging, and smashing away behind showy guitarists and flamboyant frontmen, drummers sometimes have problems being seen, but never heard. But while John Bonham or Keith Moon never got lost in the mix, it’s a rare thing to hear them out of it. Whole Lotta Love (Isolated Drum Track) Dean Torrence of Jan and Dean (A Conversation) Jan and Dean, circa 1954 With high school friend Jan Berry, Dean Torrence formed the vocal group Jan and Dean in Los Angeles in 1959. 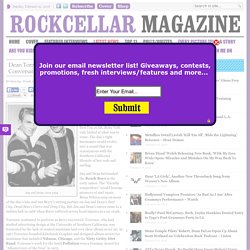 Their first Top 10 hit, Baby Talk, only hinted at what was to come. The duo’s tight harmonies would evolve into a sound that was synonymous with the Southern California lifestyle of hot rods and surfing. Crown of Creation - Jefferson Airplane. The germs What we do is secret Ep Full album. The Germs - Sugar Sugar. Rock Legend Animal Dies Aged 66. TRIBUTES have been flooding in from all across the world following the death of Animal, the legendary drummer with rock outfit Dr. 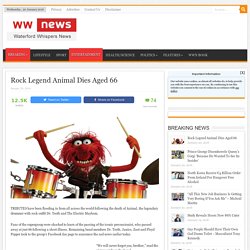 Teeth and The Electric Mayhem. Fans of the supergroup were shocked to learn of the passing of the iconic percussionist, who passed away at just 66 following a short illness. Remaining band members Dr. Teeth, Janice, Zoot and Floyd Pepper took to the group’s Facebook fan page to announce the sad news earlier today.

“We will never forget you, brother,” read the statement from the band.

DEAD. ‘Towers of London’: Must-see doc for all serious XTC fans. In late August 1980, XTC spent an extended weekend at Richard Branson’s Manor Studio in order to lay down another version of “Towers of London,” a track that would eventually become the second single off of Black Sea, following “Generals and Majors.” 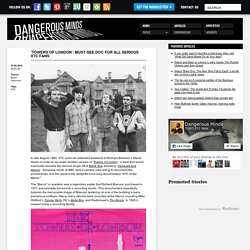 Someone clever at BBC sent a camera crew along to document the proceedings, and the result is the delightful hour-long documentary “XTC at the Manor.” The “Manor” in question was a legendary estate that Richard Branson purchased in 1971 and promptly turned into a recording studio. (The documentary repeatedly features the memorable image of Branson teetering on one of the building’s many precarious rooftops.) Many, many albums were recorded at the Manor, including Mike Oldfield’s Tubular Bells, PiL’s Metal Box, and Radiohead’s The Bends. In 1995 it ceased being a recording facility. XTC also recorded White Music and English Settlement at the Manor. The genius of “Tusk”: Fleetwood Mac could have followed “Rumours” with more of the same — but they made this visionary masterpiece instead. Gregg Allman - Midnight Rider. 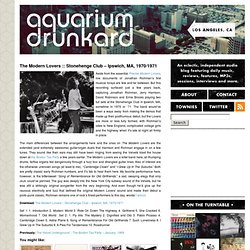 But this recording surfaced just a few years back, capturing Jonathan Richman, Jerry Harrison, David Robinson and Ernie Brooks playing two full sets at the Stonehenge Club in Ipswich, MA, sometime in 1970 or ‘71. The band would’ve been a ways away from making the demos that made up their posthumous debut, but the Lovers are more or less fully formed, with Richman’s odes to New England, complicated college girls and the highway when it’s late at night all firmly in place. The main differences between the arrangements here and the ones on The Modern Lovers are the extended (and extremely awesome) guitar/organ duels that Harrison and Richman engage in on a few tunes.

They sound like their ears may still have been ringing from seeing the Velvets blast the house down at the Boston Tea Party a few years earlier. Set 1: 1.

The Boston Tea Party – January, 1969. More often than not, most of what you read concerning the Velvet Underground will inevitably note how woefully underappreciated the group were during its brief lifespan. 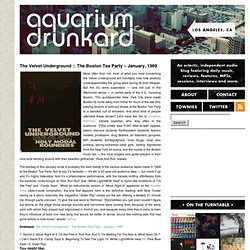 But the VU were superstars — and not just in the Warholian sense — in certain parts of the U.S., including Boston. This quintessential New York City band made Boston its home away from home for much of the late 60s, playing dozens of sold-out shows at the Boston Tea Party to a devoted cult of followers. And what kind of people attended these shows? Let’s hand the mic to Jonathan Richman, Velvets superfan, who was often in the audience: “[T]he crowd was FUN!” Read Laurie Anderson’s Obit for Husband Lou Reed. See a Gallery of Lou Reed Pictures From the '70s. Velvet Underground, live,1969,CD-2, Quine Tapes, 5 songs, 77 mins.,(2 of 3)

Lou Reed v Lester Bangs: a classic interview from the vaults. How The Baby Boomers Stole Music With Myths Of A Golden Age. Click here to buy the first eBook anthology of Quietus writing One of the lead stories on Radio 4’s Today programme at 8am on June 12th, 2013, concerned an interview given by Bishop of London Richard Chartres. 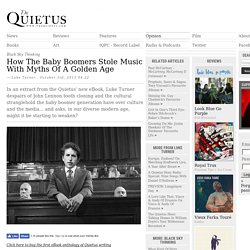 In it, he said that his generation – the baby boomers born and brought up after the Second World War – were hoovering up an unfair proportion of our resources. “Much of that is absorbed by the fortunate generation to which I belong in ways which raise questions – severe questions – of intergenerational equity,” he said. Shortly before the next news bulletin, listeners enjoyed an extended, eight-minute report on a new eBook of former Beatles drummer Ringo Starr's “never-before-seen” photographs. The Nearest Far Away Place: Brian Wilson, the Beach Boys, and the Southern California Experience: Timothy White: 9780805047028: Amazon.com. Freddie in Classic Rock Dec 01. One day back in the late 80s, I saw Freddie Mercury in the street. 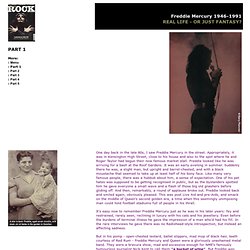 Appropriately, it was in Kensington High Street, close to his house and also to the spot where he and Roger Taylor had begun their now famous market stall. Freddie looked like he was arriving for a bash at the Roof Gardens. It was an early evening in summer. Freddie in Classic Rock Dec 01. Fillmore East Shows. Bob Dylan Acknowledges 50-Year-Long Hoax: My Lyrics Don’t Make Sense. Sponsored Links Rock and roll legend, Bob Dylan, acknowledged in a recent interview that he has perpetuated an elaborate hoax on the public for more than fifty years. 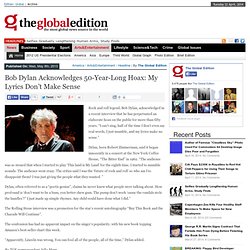 FLEETWOOD MAC - Oh Well (1969 UK TV Performance) ~ HIGH QUALITY HQ ~ Jethro Tull - Live at Madison Square Garden 1978 - Full DVD. Neil Diamond - The Bang Years 1966-1968. Looking back on my youth, I remember my father getting all worked up about Neil Diamond’s Hot August Night album, declaring it to be one of the best live albums ever. I’ve yet to obtain a copy to see if his assessment was right, but I’ll agree that he was pretty spot on with a similar critique of Live At Leeds. All of his talk about Neil Diamond heightened during the time when he tapped Robbie Robertson to man the controls for Beautiful Noise.

My dad was certain that the pairing would turn out as legendary as it must have looked on paper. After he played it, I had a chance to sample it for myself. During this time, Aerosmith was the shit, as was Humble Pie, Peter Frampton, Alice Cooper, and those legendary artists that dad turned me on to when I was first transfixed with the shitty turntable in my bedroom. Neil Diamond - The Bang Years 1966-1968. Neil Diamond's recordings for Bert Berns' Bang Records label have a tortured release history, so it is good to see the release of the 23 track The Bang Years: 1966-1968 CD on Sony Legacy, a long-promised, but much-delayed, collection. The set presents nearly all of Diamond's Bang recordings in their original, rockin' mono mixes (but omits two Bang era tracks, "Shot Down" and "Crooked Street," for reasons I am not entirely clear on).

I primarily know these songs through a 2 LP set released by Bang in 1973 called Double Gold. Double Gold, while containing some great music, is a fairly thorough butchering of Diamond's early hit records. It features a couple mono recordings, some of the inferior stereo mixes, some horrible sounding fake stereo remixes with annoying panning effects, and some mono recordings that have had (unnecessary) stereo overdubs added to them. Confused? The WHO live at the Isle of Wight 1970 - Full concert (High quality). Legendary bass player 'Duck' Dunn dies in Tokyo. NEW YORK (AP) — Donald "Duck" Dunn, the bassist who helped create the gritty Memphis soul sound at Stax Records in the 1960s as part of the legendary group Booker T. and the MGs and contributed to such classics as "In the Midnight Hour," ''Hold On, I'm Coming" and "Sitting on the Dock of the Bay," died Sunday at 70.

Dunn, whose legacy as one of the most respected session musicians in the business also included work with John Belushi and Dan Aykroyd's Blues Brothers as well as with Levon Helm, Eric Clapton, Neil Young and Bob Dylan, died while on tour in Tokyo. News of his death was posted on the Facebook site of his friend and fellow musician Steve Cropper, who was on the same tour.

Cropper said Dunn died in his sleep. Dunn was born in Memphis, Tenn., in 1941, and according to the biography on his official website, was nicknamed for the cartoon character by his father. His father, a candy maker, did not want him to be a musician. "He thought I would become a drug addict and die. Richard Lloyd (guitarist) News -> 'Their Sound is Not Unlike a Fast Drill on a Rear Molar'; Check Out The Ramones' First Press Release. Bob Dylan - Love Sick (Official Music Video) NEIL YOUNG & CRAZY HORSE - STUDIO JAM 2012.

Roots and traces: spurensicherung. The Unknown Story Behind "Hey Jude" Lou Reed - Sister Ray Live 1974. Wire- 1976 Demo. Who knew that Wire was once such a full-throttle punk band? I've Got a Feeling (alternate take) - Beatles. Flipper - "(I Saw You) Shine" Flipper - (I Saw You) Shine (Live) Flipper - Ha Ha Ha (Live) Flipper - Ha Ha Ha. Del Casher and the Story of the Wah-Wah Pedal. Semi-finished: The Feelies – Crazy Rhythms [Stiff, 1980] Broadcast Yourself. After the Gold Rush - Album Cover Location. After the Gold Rush by Neil Young - Album Cover Location The album cover. The photo was taken by photographer Joel Bernstein, most likely sometime in early 1970, as the album came out in August of that year. CAN - SILENT NIGHT - BIG MUFF.

The Mysterious Roots of Modern Music - BIG MUFF. Led Zeppelin - PyZep >> Bootlegs 1968 - 1972. AND A ONE, AND A TWO. June 7, 2011 – 3:11 am. Rock and Roll - A Planet Art Whole 3.10.6 (Part 1) Sir Mick Jagger goes back to Exile. Mick Jagger on re-visiting the Stones' musical past Forty years ago, the Rolling Stones decamped to the South of France, living as tax exiles as they recorded their tenth album. The Cream - Cafe Au Go Go 1967. Rolling Stones Cocksucker Blues Movie Part 1. The Velvet Underground & Nico. The Velvet Underground & Nico is the debut album by American rock band the Velvet Underground and vocal collaborator Nico.

It was originally released in March 1967 by Verve Records. Recorded in 1966 during Andy Warhol's Exploding Plastic Inevitable multimedia event tour, The Velvet Underground & Nico would gain notoriety for its experimentalist performance sensibilities, as well as the focus on controversial subject matter expressed in many of its songs including drug abuse, prostitution, sadism and masochism and sexual deviancy.

Though a commercial and critical failure upon release, the record has since become one of the most influential and critically acclaimed rock albums in history, appearing at number thirteen on Rolling Stone magazine's list of the 500 Greatest Albums of All Time[4] as well as being added to the 2006 National Recording Registry by the Library of Congress.[5] Recording[edit] Production[edit] Music[edit] Subject matter[edit] Instrumentation and performance[edit] Led Zeppelin. Beach Boys' Unfinished Record 'Smile' Getting Released This Year.