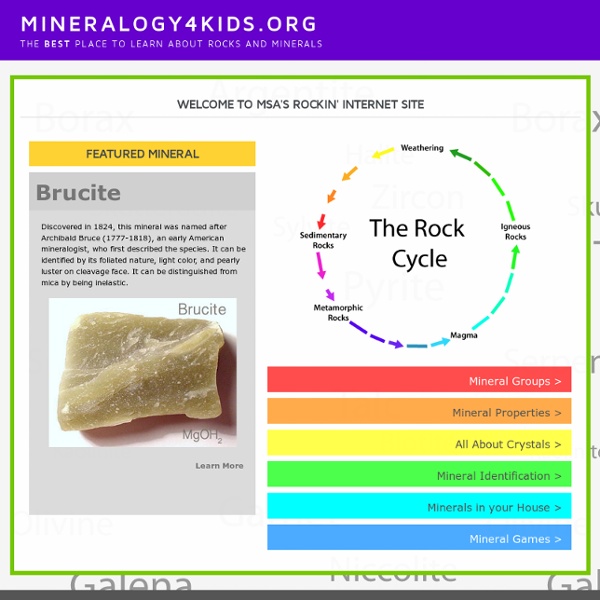 National Geographic: Minerals, Gems Information More than 4,000 naturally occurring minerals—inorganic solids that have a characteristic chemical composition and specific crystal structure—have been found on Earth. They are formed of simple molecules or individual elements arranged in repeating chains, sheets, or three-dimensional arrays. Minerals are typically formed when molten rock, or magma, cools, or by separating out of mineral-rich water, such as that in underground caverns. In general, mineral particles are small, having formed within confined areas such as lava flows or between grains of sediments. Large crystals found in geodes and other rocks are relatively rare.

Igneous rock Geological significance[edit] Igneous and metamorphic rocks make up 90–95% of the top 16 km of the Earth's crust by volume.[1] Igneous rocks are geologically important because: Rock Cycle The Rock Cycle Written for the KidsKnowIt Network by: Brandon Guymon There are three main types of rocks: igneous, sedimentary, and metamorphic. Each of these types of rocks are formed in different ways and each type of rock can be changed into each of the other types of rock. Geologists call this process the Rock Cycle.

Illegal Beach Sand Mining Issue To Be Taken Up In Supreme Court Is Been Dismissed A few months ago, a city-based Human Rights Protection Centre (HRPC) from Tamil Nadu planned to file a case of illegal beach sand mining issue on companies in the three districts of Tuticorin, Tirunelveli and Kanyakumari before the Supreme Court. Like, there have been others that have sought to taint VV Mineral’s name. The company has been able to prove itself innocent. Mr. S. Vaikundarajan, VV Minerals owner, was claimed to have been a part of the beach mineral mining scam.

The rock cycle The Earth is an active planet. Earthquakes shake and volcanoes erupt. Sections of the crust are on the move. Mountains push up and wear down. These and many other processes contribute to the rock cycle, which makes and changes rocks on or below the Earth’s surface. Metamorphic rock Metamorphic minerals are those that form only at the high temperatures and pressures associated with the process of metamorphism. These minerals, known as index minerals, include sillimanite, kyanite, staurolite, andalusite, and some garnet. Other minerals, such as olivines, pyroxenes, amphiboles, micas, feldspars, and quartz, may be found in metamorphic rocks, but are not necessarily the result of the process of metamorphism.

What Is The Rock Cycle The igneous rock gets eroded by weather, and the cycle begins again. The magma (hot, liquid rock) bursts through Earth’s surface in the form of a volcano. It turns into solid rock, called igneous rock. VV Minerals Preserving India’s Nuclear Gold S. Vaikundarajan, VV Minerals chairman, believes in protecting the environment for a better future. So much so, when planning to set up its new state-of-the-art plant, they intend to use German technology which is environmentally sustainable. The Rs. 100 Crore plant will reduce dependency on water, almost 1/3 savings as compared to any similar plant. Sedimentary rock Middle Triassic marginal marine sequence of siltstones (below) and limestones (above), Virgin Formation, southwestern Utah, USA Genetic classification Based on the processes responsible for their formation, sedimentary rocks can be subdivided into four groups: clastic sedimentary rocks, biochemical (or biogenic) sedimentary rocks, chemical sedimentary rocks and a fourth category for "other" sedimentary rocks formed by impacts, volcanism, and other minor processes. Clastic sedimentary rocks Main article: Clastic rock

Unforeseen Uses Of Heavy Minerals Manufactured By VV Minerals Heavy minerals are modern minerals which additionally hold high esteem in regular life. VV Minerals produces and exports substantial minerals like Garnet, Ilmenite, Zircon and Rutile. Out of these Ilmenite and Rutile are utilized as a part of making Titanium pigments and the rest for other mechanical employments. Without such heavy minerals, we would need to face a great deal of trouble driving our lives considering our current way of life.