GCSE Bitesize: Why was there so much racial inequality in the USA between 1929 and 1945? 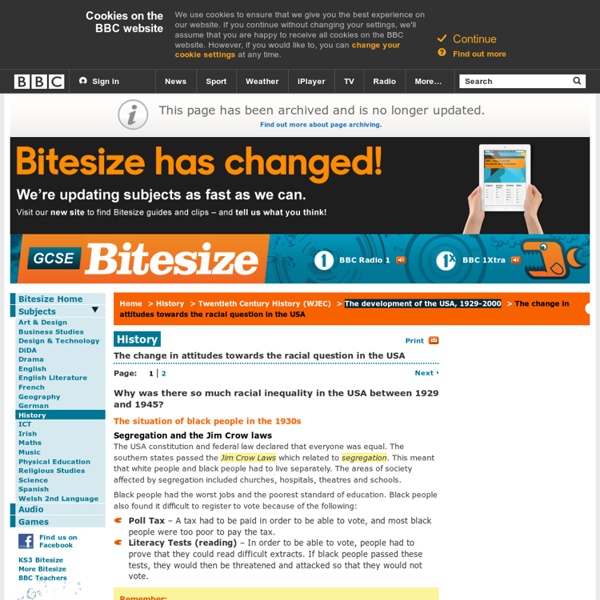 Little Rock Central High School The Little Rock Central High School incident of 1957 in Arkansas brought international attention to the civil rights cause. The Montgomery Bus Boycott may have been important but it hardly had media appeal. Here at Little Rock, you had a state fighting against federal authority, national guard troopers facing professional paratroopers and a governor against a president. As part of a media circus, it proved compulsive viewing - but what happened was shown throughout the western world and brought the civil rights issue into the living rooms of many people who may have been unaware of what was going on in the South. Eisenhower had shown that he had little faith in measures to support the African American community in the South simply because he believed that a change of heart was required and that enforcement would not work - if anything, enforcement would make matters worse. However, 1957 also saw serious problems for Eisenhower over desegregated schools in Little Rock.

Great Depression 1. Herbert Hoover was president when the Great Depression began. He declared in March 1930, that the U.S. had “passed the worst” and argued that the economy would sort itself out. 6. 7. GCSE Bitesize: Why was it difficult for black Americans to gain equal rights in the USA in the 1950s and 1960s? Dust Bowl The Dust Bowl, also known as the Dirty Thirties, was a period of severe dust storms that greatly damaged the ecology and agriculture of the US and Canadian prairies during the 1930s; severe drought and a failure to apply dryland farming methods to prevent wind erosion (the Aeolian processes) caused the phenomenon.[1] Extensive deep plowing of the virgin topsoil of the Great Plains during the previous decade had displaced the native, deep-rooted grasses that normally trapped soil and moisture even during periods of drought and high winds. Rapid mechanization of farm implements, especially small gasoline tractors and widespread use of the combine harvester, significantly impacted decisions to convert arid grassland (much of which received no more than 10 inches (250 mm) of precipitation per year) to cultivated cropland. The Dust Bowl forced tens of thousands of families to abandon their farms. Causes Settlement was encouraged by the Homestead Act of 1862. Geographic characteristics

Brave Hearts: Remembering the Little Rock Nine, 1957 Civil Rights Movement '50s Beyond religion, beyond class, beyond politics and ideology, for centuries race been the single most contentious, corrosive question in America’s national dialog. Nothing has illuminated our failings as a people as harshly as our handling of racial strife; nothing has more clearly shown us at our best and our bravest as the men and women in the great struggles of the Civil Rights Movement. For generations who have grown up in a country where blatant segregation is (technically, at least) illegal, it’s beyond bizarre to think that within living memory African-American children once needed armed soldiers to escort them safely to school. The Little Rock Nine, as the teens came to be known, were African-American students who sought to attend Little Rock Central High School in the fall of 1957. A profile of Faubus published in the next week’s issue of LIFE noted that the governor spent several days holed up in his Little Rock mansion.

Integration of Central High School - Black History In the following weeks, federal judge Richard Davies began legal proceedings against Governor Faubus, and President Dwight D. Eisenhower attempted to persuade Faubus to remove the National Guard and let the Little Rock Nine enter the school. Judge Davies ordered the Guard removed on September 20, and the Little Rock Police Department took over to maintain order. The police escorted the nine African-American students into the school on September 23, through an angry mob of some 1,000 white protesters gathered outside. Amidst ensuing rioting, the police removed the nine students. The following day, President Eisenhower sent in 1,200 members of the U.S. Numerous legal challenges to integration continued throughout the year, and Faubus repeatedly expressed his wish that the Little Rock Nine be removed from Central High. Melba Patillo, for instance, was kicked, beaten and had acid thrown in her face.