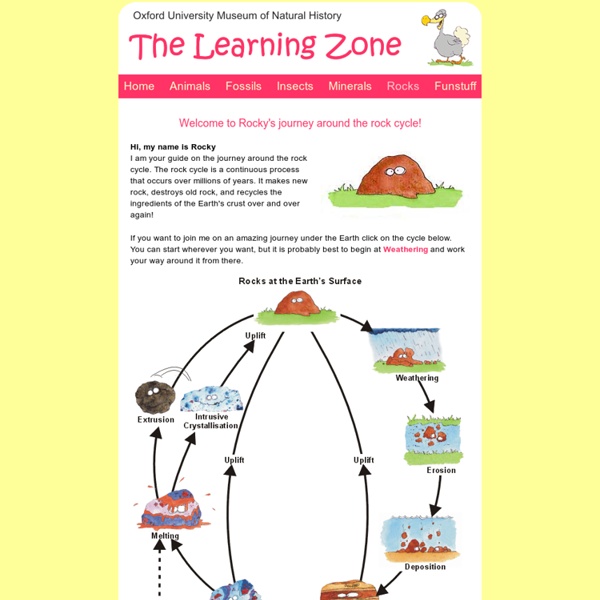 Geology.com: Rocks Lapis Lazuli Lapis Lazuli - a metamorphic rock and the most popular blue opaque gemstone in history. Tumbled Stones Tumbled Stones are rocks that have been rounded, smoothed and polished in a rock tumbler. Quartzite Quartzite a nonfoliated metamorphic rock composed almost entirely of quartz. Fluorescent Minerals Fluorescent Minerals and rocks glow with spectacular colors under ultraviolet light. Geology.com Store Gifts that Rock! Geodes Geodes look like ordinary rocks on the outside but can be spectacular inside! Trap Rock Trap Rock is a name applied to any dark-colored igneous rock used to produce crushed stone. Don*t Go To Jail Rock Collectors must know the rules before removing rocks from public and private property. Difficult Rocks Difficult Rocks Elementary students find lots of rocks that you will not be able to identify. Sand Grains A Grain of Sand Gallery of sand grains through a microscope by Dr. Sand Sand is a diverse material. Shale Siltstone Rock Tumbling Soapstone Rock Art Unakite Crushed Stone

Rock Cycle The Rock Cycle Written for the KidsKnowIt Network by: Brandon Guymon There are three main types of rocks: igneous, sedimentary, and metamorphic. Each of these types of rocks are formed in different ways and each type of rock can be changed into each of the other types of rock. Geologists call this process the Rock Cycle. Most rocks on earth began as igneous rocks. Roll your mouse over the image to highlight the parts of the rock cycle. Our igneous rock has turned into a sedimentary rock. Metamorphic rocks can also be weathered and eroded and eventually changed into sedimentary rocks. An example of metamorphic rock. So let's take the process from the beginning, and find out how it works. When the plates crash into each other, geologists call this type of plate boundary a convergent boundary. In short, the rock cycle is the name for the processes that forms and recycles the different types or rocks on our planet.

The Rock Cycle . How Rocks Change Introduction Does it seem to you that rocks never change? For example, if you find a chunk of granite today, can you expect that it will still be granite at the end of your lifetime? That may well be true — but only because our lifetimes are very short relative to the history of the earth. If we take a step back to look at geologic time (which focuses on changes taking place over millions of years), we find that rocks actually do change! The way rocks change depends on various processes that are always taking place on and under the earth's surface. Heat & Pressure What happens to cookie dough when you put it in the oven? A similar process happens to rocks beneath the earth's surface. An additional factor that can transform rocks is the pressure caused by tons of other rocks pressing down on it from above; heat and pressure usually work together to alter the rocks under the earth's surface.

National Geographic: Minerals, Gems Information More than 4,000 naturally occurring minerals—inorganic solids that have a characteristic chemical composition and specific crystal structure—have been found on Earth. They are formed of simple molecules or individual elements arranged in repeating chains, sheets, or three-dimensional arrays. Minerals are typically formed when molten rock, or magma, cools, or by separating out of mineral-rich water, such as that in underground caverns. In general, mineral particles are small, having formed within confined areas such as lava flows or between grains of sediments. Large crystals found in geodes and other rocks are relatively rare. Rocks themselves are made of clusters or mixtures of minerals, and minerals and rocks affect landform development and form natural resources such as gold, tin, iron, marble, and granite. Silicates—including quartz, mica, olivine, and precious minerals such as emeralds—are the most common class of minerals, as well as the major components of most rocks. Gemstones

The rock cycle The Earth is an active planet. Earthquakes shake and volcanoes erupt. Sections of the crust are on the move. Mountains push up and wear down. These and many other processes contribute to the rock cycle, which makes and changes rocks on or below the Earth’s surface. Rocks are made of minerals, which are made of specific chemical elements. There are three main types of rock – igneous, sedimentary and metamorphic. Igneous rocks Magma is a hot mix of melted minerals, and igneous rocks are formed when it cools. Sedimentary rocks On the surface of the Earth, the processes of weathering and erosion can break down any rock into small pieces called sediments. Not all sedimentary rocks are made from broken pieces of other rocks. Metamorphic rocks The Earth’s crust is constantly, but slowly, on the move. There are parts of the Earth, called subduction zones, where the crust is carried deep inside. Interacting cycles The rock cycle interacts with other Earth cycles in many ways.

Activity 3: Igneous Rocks - Bryce Canyon National Park Chemical CompositionChemical composition of igneous rock can often be estimated just from looking at the rock. Geologists look at the proportions of light-colored and dark-colored minerals in an igneous rock to estimate the chemical makeup of rock. Light-colored or felsic, minerals have more silica in them. Silica is one of the most abundant elements on Earth and is the chief component of quartz. Felsic minerals are most often colorless, white, gray or pink but can be any number of colors. The dark, or mafic, minerals are richer in iron and magnesium. The mineral proportions of the rock are what allows geologists to classify rocks chemically. Felsic rocks are high in silica (65% +). Instructional Procedures: Create colored tags for the students to wear. Discussion: What type of igneous rocks were formed? Extension: For teachers interested in rock identification, the following is a suggestion of how you can set up a rock-ID activity.