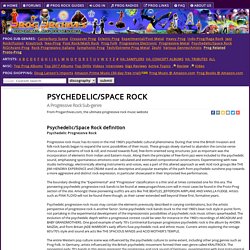 During that time the British Invasion and folk-rock bands began to expand the sonic possibilities of their music. PINK FLOYD. And here we are. 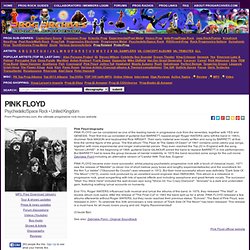 All with the same intention to honor the Giants. For this album there are 2257 ratings and 273 reviews. RIO/Avant-Prog. A Progressive Rock Sub-genre From Progarchives.com, the ultimate progressive rock music website RIO/Avant-Prog definition Avant-Prog Avant-prog is an umbrella term which refers to any progressive rock artist with a strong leaning towards avant-garde and highly experimental approaches to music. 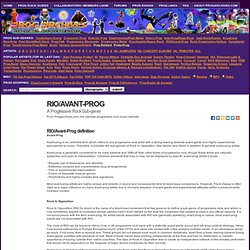 Therefore, it includes the sub-genres of Rock In Opposition (see below) and Zeuhl in addition to general avant-prog artists. Avant-prog is generally considered to be more extreme and 'difficult' than other forms of progressive rock, though these terms are naturally subjective and open to interpretation. FRANK ZAPPA. Frank Vincent ZAPPA was born in Baltimore on December 12, 1940. 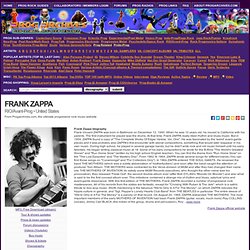 When he was 10 years old, he moved to California with his parents. The first instrument he played was the drums. At that time, Frank ZAPPA really liked rhythm and blues music. Prog Folk. A Progressive Rock Sub-genre From Progarchives.com, the ultimate progressive rock music website Prog Folk definition. 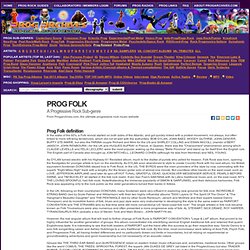 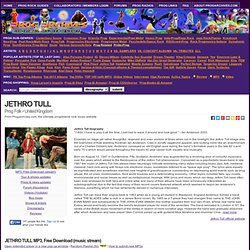 Eccentric on stage yet rather thoughtful, reserved and even sombre at times when not in the limelight, the Jethro Tull image was the brainchild of flute wielding frontman Ian Anderson. Crossover Prog. I am on record for having anointed 2012's "Skin" as one of the best prog albums in recent memory, a seductive selection of heart stopping tunes, played by some of the finest lesser- known musicians on the planet. 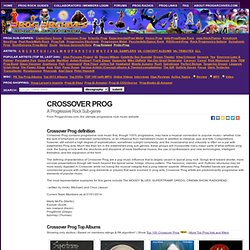 This was a complete package, amazing artwork, crystal clear production, expert technique and seamless songs that simply charmed me to no end. Firstly, there is such a thing as eye and ear candy, her name is Anne-Marie Helder, a beauty with a gorgeous voice, both powerful and evocative, suave and forceful. She can hush, she can rush, growl and howl are her fortes.

Her reputation has grown by leaps and bounds, a perennial vocal queen for the prog throne. ALAN PARSONS PROJECT. Symphonic Prog. Swedish band THE FLOWER KINGS are among the living legends of progressive rock these days, a flagship band in the revival of the genre in the 1990's and a surefire headliner act for just about anyone planning to do a progressive rock festival that wants to draw the crowds in. 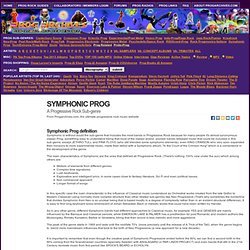 If we can talk about stars in such a niche environment as progressive rock is, The Flower Kings have been one of the brightest as far as bands that didn't start out in the 1960's or early 70's go. "Desolation Rose" is their 12th studio production, and was released through prestigious label Inside Out in 2013. Now I do not recall just why this CD came to end up in my stack of CDs to review. I bought this one for my wife as a pre-Christmas gift, the limited edition version with bonus tracks, but can't recall if it subsequently ended up in my stack of CDs to review because she wanted me to write about it or because she had chatted with one of the band members and had promised them I would cover this one. GLASS HAMMER. Glass Hammer biography Glass Hammer is a symphonic-progressive rock band from the United States. 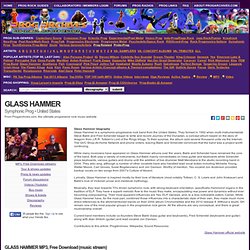 They formed in 1992 when multi-instrumentalists Steve Babb and Fred Schendel began to write and record Journey of the Dunadan, a concept album based on the story of Aragorn from J.R.R. Tolkien's Lord of the Rings trilogy. To their surprise, the album sold several thousand units via the Internet, The QVC Shop-At-Home Network and phone orders, leaving Babb and Schendel convinced that the band was a project worth continuing. FOCUS. A classic band still creating good music. 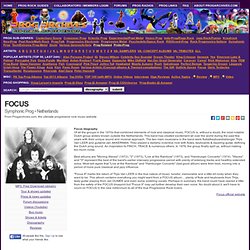 This is Focus, and within this progressive rock realm, who doesn't know their music? Well, I believe we all are aware of who they are, but some of us may have thought they had stopped composing and releasing albums, surprise, they are here with a new CD entitled "X" which offers 10 songs and a total time of 51 minutes of pure Focus' music, I mean, you will surely have some reminiscences of their first albums here. And that can be exemplified with the opener track "Father Bachus" which I am sure will take you to the past and remember their "Hocus Pocus" hymn.

The rhythm is similar, it is good rock with Thijs' flute and excellent guitars by "Menno Gotjies" this time. YES. YES formed in 1968 with Jon ANDERSON (vocals), Chris SQUIRE (bass, vocals), Peter BANKS (guitar, vocals), Tony KAYE (keyboards), and Bill BRUFORD (drums). Well-known and influential mainstream progressive from the 1970's, and still around in some form ever since, they were highly influential in their heyday, especially notable for the really creative "Relayer", which included at the time Swiss keyboardist Patrick MORAZ who replaced Rick WAKEMAN During the 1970s, YES pioneered the use of synthesizers and sound effects in modern music.

EMERSON LAKE AND PALMER. Emerson, Lake & Palmer ELP revolutionized the 70's rock scene by introducing a new line-up format. This fact really mattered due to each musician's geniality and unlimited talent that, put together, generated a level of music never achieved by anybody else as of yet. All of the musicians came from established bands before joining forces together: Greg LAKE came from KING CRIMSON, Carl PALMER came from ATOMIC ROOSTER, and Keith EMERSON came from THE NICE. They explored their capabilities to an extreme, even with the technology limitations of the early 70's, breaking ground, setting the new parameters for a new vein in the english pop music (at the time) which would be called progressive music.

RENAISSANCE. Ashes Are BurningRenaissanceSymphonic Prog Review by ebil0505 I truly do believe this album deserves five stars. GREENSLADE. Joie De Vivre Greenslade never was one of the really big and essential Prog bands. Nevertheless, I think that a comprehensive Symphonic progressive Rock collection should have at least one of their albums. GENESIS. Zeuhl. First released on: riversofreverb.blogspot.dk. MAGMA. MAGMA is a progressive group led by drummer/composer/vocalist Christian VANDER that has been active in the 'classic period' and in the 21th century. Canterbury Scene. CARAVAN. Eclectic Prog. GENTLE GIANT. This is another wonderful album from Gentle Giant. I like the variety of interesting sounds and songs on it. KING CRIMSON. " When you want to hear where music is going in the future, you put on a King Crimson album. " - Bill Bruford, 1995. VAN DER GRAAF GENERATOR. VAN DER GRAAF GENERATOR is an English eclectic progressive rock band with front man Peter HAMMILL from 'the classic period' that has proven be one of the most important bands of the progressive genre.

YEZDA URFA. I've been considering whether to give this album one or two stars for a bit.